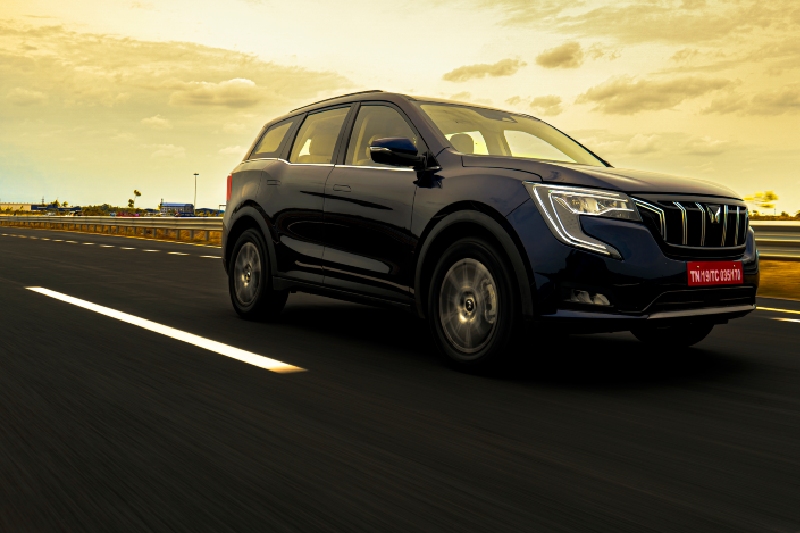 When the Mahindra XUV500 was first launched, I remember seeing a full-page advertisement in the newspaper wherein every single feature of the XUV500 was listed. Back then, having so many features in one car seemed like a pretty incredible feat, to be frank. But jump forward a few years to the present, and almost every single automotive manufacturer can fill up numerous pages of the brochure with the features they offer. Now that Mahindra has to launch their flagship product after all these years, one would presume they would use other measures to make it stand out from the rest. But that is where you are wrong. Mahindra has done just what they did before and have launched their all-new full-size SUV, the XUV700, with a whole host of segment-first features, gadgets and gizmos. Well, that is something we will discuss as the review progresses. Let us first focus on all the other aspects of the XUV700.

After seeing only camouflage images of the XUV700, I know that the first thing you'd wish to know about is how it looks. In the two years that Mahindra has spent testing the XUV700, so many renderings, spy shots, leaked images were showcased, but no more need for speculating how it looks. The body lines of the SUV are bold and give the vehicle a pretty strong appearance. Right at the centre, you have Mahindra's new logo that sits prominently on the front grille. You also see the distinctive claw-shaped clear LED headlight with DRLs and the LED fog lights at the bottom of the redesigned front bumper.

The only angle from which it slightly resembles its sibling.[/caption] Move to the side of the XUV700, and you see the slight resemblance it has to its sibling, but that is where the similarities end. Also, while I am talking about the side profile, it is nearly impossible to miss the lack of door handles. Does that mean you can't get in? Not at all! Mahindra has fitted the SUV with pop-out door handles that sit flush with the bodywork when the doors are locked. While it does look the part, they sometimes can be quite a hassle to operate. Moving on, let me divert your attention to the set of 18-inch diamond-cut alloy wheels offered on the top-trim variant (the one I drove), while the lower variant gets a set of 17-inch alloys or 17-inch steel rims, depending on the variant chosen. Like the front, the back of the vehicle has some nips and tucks on the rear tailgate, making the rear more angular and not look like a big slab of metal. What really stands out tho is the arrowhead-shaped rear taillights that make the XUV700 look like nothing else on the road. If performance is what you are after, how does 200PS and 380Nm from a 2.0-litre turbocharged mStallion petrol engine sound? Need more? How about a 2.2-litre turbocharged mHawk diesel engine with 185PS and 450Nm (automatic) and 420Nm (manual) seem like, does that suit your fancy? Yet another diesel engine is also on offer with a lower power tune that produces 155PS with 360Nm (only available as a manual). Oh, and by the way, these engines feel remarkably smooth and refined. The power delivery is linear but doesn't make the XUV700 feel sluggish. Overtaking feels like a breeze, and it will happily cruise along at triple-digit figures without breaking a sweat. Another good news is that both engine options can be had with either a 6-speed manual or a 6-speed automatic gearbox. Select diesel option also comes with four drive modes (Zip, Zap, Zoom) & a Custom mode. Additionally, Mahindra has also stated that an all-wheel-drive powertrain will be offered with select engine options.

I must admit that the new test track of Mahindra that we were at was not an ideal location to test the suspension of the XUV700, as the tarmac were smooth and even. However, we did experience some bad patches or roads from our starting point to the Mahindra test track, and I can report that the suspension feels extremely soft and absorbs the bumps rather well. Even on really badly surfaced roads, it felt steady and planted and didn't pass too much of the impacts and undulations into the cabin. However, the brakes, even tho they offered a good amount of bite, I felt that the brake pedal felt a little spongy. When I pointed it out to an engineer, they had to say the brakes take a bit of running into to calibrate correctly and that I was driving a new vehicle; hence, I faced that issue. (This can be clarified only after the car returns to us again for a detailed review). We must now shift our attention to the place most of you would spend your time in, and that is the interiors. Open the door of the XUV700, and you are immediately greeted with leatherette seats, soft-touch fabric on the dashboard and wood trim pieces on the door panel. At first glance, it can easily confuse someone and make them assume that it is a car from a segment above. The seats themselves feel incredibly comfortable with an ample amount of cushioning and support for those long drives. The same goes for the seats for the rear passenger, too. You'd be happy to hear that third-row passengers will not complain about lack of space as the second row of seats can be adjusted to improve legroom, and the big windows and large sunroof make the cabin seem very airy. But there was one thing that was sticking out like a sore thumb in an otherwise sleek and modern interior, and that was the plastic rear-view mirror that felt just didn't belong there. Yes, I agree that cost-cutting for any manufacturer is crucial for their business, but the rear-view mirror is constantly on your line of sight, and cost-cutting there doesn't feel too ideal.

And finally, we now move on to what is the essential aspect for a potential buyer in today's market, which is the features it offers. Are you ready for this? Let us begin with the thing that your eye catches the moment you step inside, and that are the two 10.25-inch screens. One display acts as the digital instrument cluster that can be controlled via the steering mounted controls; this display shows all the information that a driver might need. In addition, its theme can be changed depending on the driving mode selected. The other screen is a touchscreen infotainment system. I must report that the vehicle we tested was a preproduction version and had certain features of the system deactivated.

Is it just me, or does the infotainment screen resemble those found in BMWs?[/caption] But nonetheless, the infotainment system does offer wireless Apple CarPlay with Android Auto, a 360-degree camera, blind view monitoring on the driver display, Alexa enabled voice controls and preinstalled applications such as Zomato and Accuweather. But, that's not all! The interiors of the XUV700 boast of a lot more features such as a large panoramic sunroof, electrically adjustable front driver seat with memory, a 445W 12 speaker Sony audio system, dual-zone climate controls, wireless charging and an electric hand brake with auto hold (I need a glass of water after stating these features!). Safety is yet another place where Mahindra hasn't skimmed out. You are offered 7 airbags (knee airbag for driver) and the latest generation of an electronic stability program (ESP) with traction control, hill hold control and TPMS. Additionally, the vehicle also detects the driver's drowsiness system by monitoring the throttle and steering inputs. But what really takes the cake is the advanced driver assistance system or ADAS system that Mahindra offers. It allows the car to keep itself centred in a lane, slow down or speed up by following the car upfront when cruise control is set and even brake automatically during an emergency. If like me, you too are annoyed by the chimes that cars produce when they cross 80km/h, that chime can be personalized to play the voice of a loved one asking you to slow down (pretty nifty if you ask me).

Now for the big one, the all-important question. Should you wait to buy one? When the XUV700 launches later this year, it will be offered in a 5-seater and 7-seater layout, which means the segment it enters is exceptionally competitive. It is currently being dominated by Hyundai, Kia and Tata. Still, Mahindra certainly has a product in its arsenal that can change the game in this segment. With the space on offer, powerful petrol and diesel engines, a long list of features and an extremely competitive price tag, the 2021 Mahindra XUV 700 will certainly give its competitors a run for their money. Currently, as a buyer, if you had to choose between power, space, features or looks, none of the vehicles in this segment offer all the above-mentioned points. But after spending a whole day with the XUV700, it is safe to say that it indeed covers most of the criteria a mid-size to full-size SUV buyer would want from their purchase.