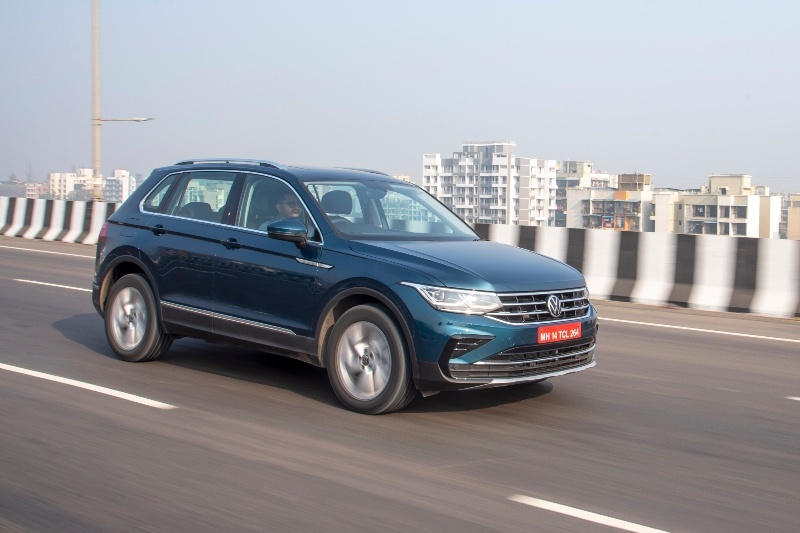 I presume you must be scratching your heads wondering why are we featuring a car that was first launched back in 2017. Well, look closely, and you are going to spot the changes that the all-new Tiguan carries compared to its predecessor. If you couldn't spot the differences, let me dive into the details and show you all the significant changes Volkswagen has made to their 5-seater SUV.

Look at the Tiguan from the front, and you are bound to notice the not-so-subtle changes it has. Instead of the boxy design of the front, it now is a bit curvier with these distinctive looking headlights. Interestingly, these aren't your standard headlights. Instead, these are LED Matrix headlights with IQ light that consist of 24 individual LED lights that help illuminate the road better. What is also new is these integrated DRLs. Furthermore, there have been slight tweaks made to the design of the front bumper, which now includes this single piece chrome garnish and faux skid plate. Moreover, this grill design is also new, consisting of these three chrome strips and their all-new Volkswagen logo. VW has garnished the Tiguan with oodles of chrome to keep us Indians happy.

Move to the side profile of the Tiguan, and you would need to be looking minutely to be able to differentiate both generations. The only giveaway while looking at it from the side are these 18-inch alloy wheels and this chrome piece on the fender. Just like the side, the rear of the Tiguan is quite similar to its predecessor. However, keen-eyed views will notice that the rear taillights are now fully LED and have this distinctive design within the lights. Adding to that, Volkswagen has repositioned the Tiguan badge from the bottom of the tailgate to it now sitting prominently at the centre of the tailgate.

Open the door of the Tiguan, and you are greeted with the same level of luxury and sophistication you expect from a car of this calibre. This all-new flat-bottomed steering wheel with paddle shifters is immediately what your eye catches. Further, you are greeted with a fully digital 10-inch digital display, which showcases all the essential information needed by a driver. The readout of the display is crisp and clear, making it easy to read and understand. At the heart of the dashboard is an 8-inch touchscreen infotainment system that supports Apple CarPlay and Android Auto through a type-c USB port and not wirelessly.

While the overall feedback of the screen is counterintuitive and easy to use, what really impressed me was this option to use gestures to make specific changes on the screen and that the screen hides functions that are not important and showcases them only when you get your hand closer to the screen. Other tech features include 3-zone climate controls which are controlled by this panel. However, I must admit I still prefer the old-school way of manual knobs and switches to this touchscreen panel. One feature I would certainly like to point out is that the Tiguan comes with heated seats and comes with a heated steering wheel (just what most people up North need during this time).

The rear seat might be where most Tiguan owners would spend their time, and it is safe to say that nothing has changed. There still is plenty of headroom, legroom and thigh support for the rear passengers. In addition, the rear cabin feels airy thanks to these large windows and this large panoramic sunroof making the passengers feel less claustrophobic.

Alright, as I mentioned, most Tiguan owners would like to sit and relax in the back seat. But some owners would like the best seat in the house. And that is the driver's seat. To begin with, the Tiguan is powered by the same 2.0-litre TSI petrol engine as before, which has 187bhp and 320Nm of torque. Power is sent to all four wheels via a 7-speed DGS gearbox. Speaking about the gearbox the shifts are rapid and smooth no matter what gear you are in. The engine, too, packs quite a punch and offers decent power delivery through the rev range, making overtaking a breeze. On the other hand, the steering feedback does feel really soft, but that helps when you need to manoeuver this SUV through tight spaces. Although the steering feedback does improve as the speed increases. The feel of the suspension is quite a surprise as it is incredibly supple and soft. While some drivers would prefer stiffer suspension and harder steering feedback but for bad roads that plague most cities, you would want suspension such as this.

All four corners of the Tiguan come with disc brakes offering good feedback and bite, allowing them to stop the SUV immediately no matter what the emergency is. Now, we Indians have gotten apprehensive about the safety aspect, and that is not a thing to worry about in the Tiguan. Like before, it comes with a whole host of safety technology such as 6-airbags, ABS, EBD, electronic locking differential, and a lot more that are bound to keep all occupants safe.

If you ask me, the Volkswagen Tiguan was always a car that people misunderstood. Quite a few of us didn't realise the true potential this car had to offer simply due to its price. But now that Volkswagen has decided to locally produce this at their plant in Aurangabad. The price of Rs 31.99 lakh makes it seem like a good deal. That being said, its competitors, the Jeep Compass, Citroen C5 Aircross and the Hyundai Tucson, might be lighter on your wallet. But in the end, the German build quality and need for perfection just helped the Tiguan edge past its competitors. So if you are in the market to buy a premium 5-seater SUV, the Volkswagen Tiguan should be certainly on your consideration list.

For – Engine response, suspension Against – Misses out on some tech features