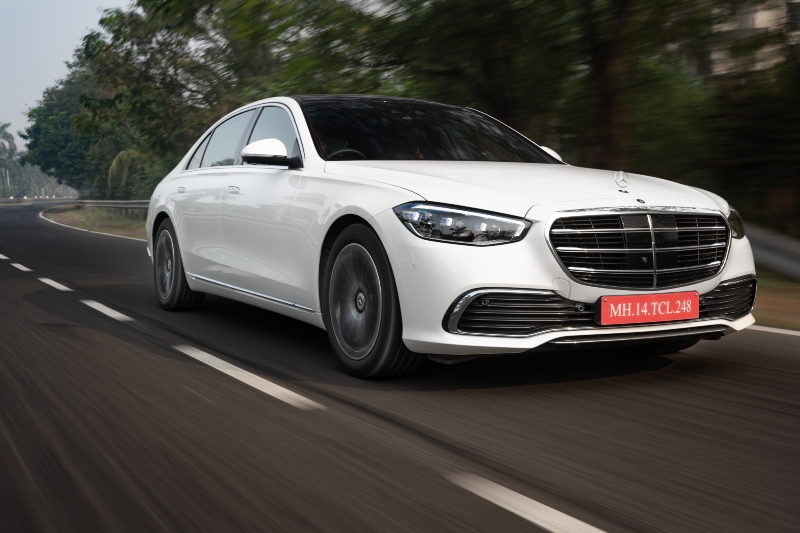 The S-Class has always been the pinnacle of luxury. From the early nineties, every piece of innovative automotive technology was first seen on the S-Class. Quite honestly, the S-Class S 400d that we had reviewed earlier was loaded to the brim with modern technology. But all that came at an eye-watering price tag of Rs 2.17 crore.

Mercedes-Benz has announced that they will build the S-Class at their Chakan plant in Maharashtra. To be precise, this S-Class standing behind me has seen a significant drop in the price tag it carries, Rs 60 lakhs. So let us look at what Rs 1.57 crore can now get you, here are the changes Mercedes had to make compared to the limited run CBU units of the Mercedes S-Class we reviewed earlier.

On the outside, made in India, S-Class carries only a few changes compared to the CBU version. Changes include a reduction in wheel size from 20-inches to 19-inches and the deletion of the AMG line body kit it previously carried. But do not worry not; all the fancy exterior gizmos such as the high-res adaptive LED headlights, the gorgeous LED taillamps and flush door handles are still on offer. Honestly, any potential customer looking to buy this car won't spend their time outside. Instead, they will spend it inside, and that is where the S-Class still holds its ground.

Move into the back seat, and I am happy to report that things back here are still pretty luxurious. Although you do miss out on the 4D Burmester sound system and the adaptive ambient lighting on the door. You still will be rather spoilt for choice. You still are greeted to oodles, magnificent trim pieces and opulent use of leather. What is more, the S-Class is equipped with a chauffer's package. Press the button on the door, and the passenger seat moves out of the way, making the rear seat into a proper recliner. Furthermore, open the armrest, and you have the tablet to control all your systems (if you feel too lazy to bend forward and use the screen).

One of the most significant changes the made in India S-Class receives is its powertrain. It has been downgraded from 400d to 350d. But in reality, does it really feel like a downgrade? This 3.0-litre straight-six motor produces 286hp and 600Nm, which is obviously lower than the 330hp and 700Nm the 400d produced on paper. Quite honestly, the 350d has just the right amount of grunt to haul this 2-tonne sedan. Its 9-speed gearbox feels exceptionally smooth and shifts through the gears with a breeze. Even though this is a diesel engine, it feels highly refined and filters out all the vibrations you usually experience with diesel motors. What's more impressive is that the S350d can hit triple-digit speeds effortlessly without the passengers inside feeling a thing.

To add to the engine's refinement, the air suspension offered on the S350d makes it feel like you are riding on a cloud. No matter how bad the road surface is, the passengers rarely feel a thing. However, if you push the S-Class and show it some corners, it does wallow around a bit and only then starts to show its weight. Furthermore, the brakes on the S350d have just the right amount of bite to help bring this 2-tonne sedan to a stop as soon as possible.

Mercedes has managed to slash the price of the locally-assembled S-Class in India by removing some of the features the S400d offered. This misses out on the fantastic 3D instrument cluster, cooled front seats, an open-pore wooden trim and most importantly, the AMG line steering wheel. Oh, and before we forget, the radical rear wheels steering that turned when the front wheels turned too are now not available any more on the S350d.

In all honestly, I must admit that all the gimmicks that the CBU version of the S-Class offered were something that would certainly entice you. However, the price tag that it carried could give someone's wallet a good beating. That being said, Mercedes did manage to sell all the units of the CBU. So it is safe to assume that with a price tag of Rs 60 lakhs lower, the S 350d will still be the king of the luxury-sedan market in India. It rivals the BMW 7 Series, and Audi A8L certainly are going to have to pull up all the tricks up their sleeves to knock a blow to the sales figures the S-Class is bound to receive.

Against – Still quite expensive