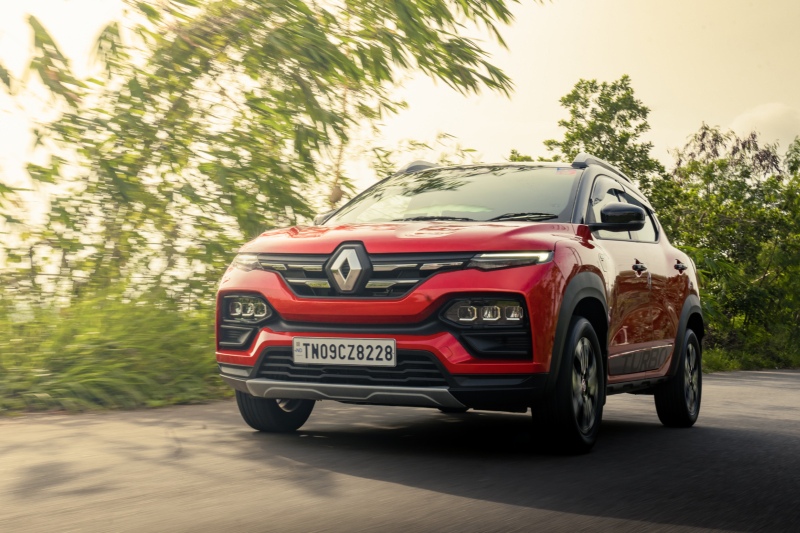 The sub-four-metre SUV segment in India is ever growing at an extremely rapid pace. As a result, the competition has gotten really cutthroat, and each auto manufacturer is trying to outdo its rivals. Renault, too, is riding the wave of success in this segment with the Kiger, which just crossed 50,000 sales units number. So as an occasion to celebrate this milestone and also refresh the Kiger slightly, Renault has launched the 2022 Kiger with some very subtle cosmetic updates.

Since this is the most significant talking point of the 2022 Kiger, let me begin by showcasing all the new elements on the Kiger. Since people liked the overall macho design of the Kiger in general, that hasn’t been tweaked. But what is now added is a black paint colour option along with new silver skid plates, which will undoubtedly make consumers happy. The new red housing on the Renault logo on the wheel cap also makes it aesthetically appealing. On the side, a new Turbo decal in black with red accents helps add to your bragging rights that you have the Turbo variant of the Kiger.

Move onto the inside of the Kiger, and the changes here are actually quite attractive. First things first, the black fabric seats now come with contrasting red stitching, which makes the interiors quite premium. Complementing the red elements is a faded honeycomb pattern on the dash, which does liven up the dark cabin. Other talking points include the wireless charger now being offered as standard across all variants, and more importantly, cruise control has now been added, which does feel like a boon to use. Other than that, most features on the Kiger retain, such as its 8-inch touchscreen infotainment system with wireless Apple CarPlay and Android Auto.

Engine and Driving of the 2022 Kiger

As I mentioned earlier, most of the changes to the 2022 Kiger are cosmetic, and no noticeable changes are made to it mechanically. Powering the Kiger, we drove was the same 1.0-litre 3-cylinder turbo that produces 100bhp and 152Nm. Since I drove the Kiger for the first time, I must report that I was really impressed with the CVT automatic gearbox since the shifts are extremely slick, making up for the turbo-lag this motor has. I even tested out the different driving modes (Eco/Normal/Sport), and surprisingly I was enjoying the Kiger more in normal than in Sport. On the other hand, Eco really dulls down the motor.

While I enjoyed the 1.0-litre turbo motor, what was a bummer was the NVH levels. I like listening to an engine note while I drive, but those engine notes should be from a V8 or V12, not from an inline 3-cylinder engine. Other than that, the riding and handling of the 2022 Kiger remain the same, and the light steering of the Kiger still makes it very nimble to drive in the city.

The Kiger has proven to be a very good product for Renault, and for them to cross the 50,000 sales mark in such a short span proves this point rather well. Now with its subtle updates, Renault India is really trying to appeal to a larger audience with the 2022 Kiger, and I feel the changes are going to attract potential buyers. At Rs 5.99 to 10.40 lakh, the price tag has seen a marginal gain of Rs 5000, but that still makes this one of the cheapest sub-4 meter SUVs in India and buyers who are on a restrained budget is undoubtedly going to appreciate and love the Kiger for everything it has to offer.

To read about Renault India crossing the 50,000 milestone, click here.