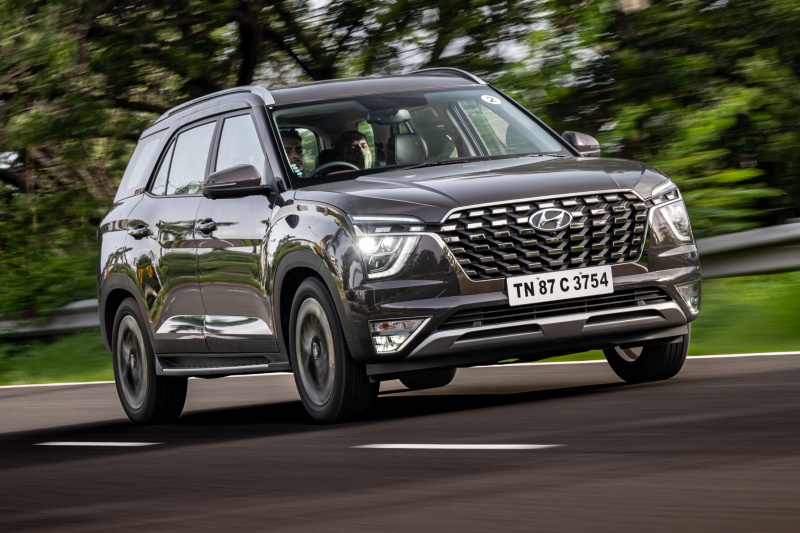 It’s hardly a news flash if you’ve been paying attention – over the past decade, families have dumped their sedans for similarly priced SUVs. They seem more suited for our driving conditions, offering space and versatility that suit an active lifestyle, let alone the imposing road presence and the feeling of ‘owning some large’. Such is the transformation that a once well-known hatchback maker is now the country’s largest SUV seller. No prizes for guessing, it is the Korean pappy.

It is crucial then for such a brand to foray into a new segment that’s emerged in our dog-eat-dog market. A new segment, you ask? Enter extended versions of mid-size SUVs, increasing their fancies for customers to drool over. Mahindra has always had the XUV500 which is due a replacement, Tata is banking on the Safari’s nametag for sales and MG, well they’re offering features plucked straight from an expensive Audi. So what’s Hyundai’s answer to them all?

As it is, there’s a lot of pressure on the newest entrant on the group, but the Alcazar need not worry too much. After all, it’s based on the Creta whose popularity has grown quicker than the trendiest meme on social platforms. But before you label the Alcazar as an extended version of Hyundai’s hotseller, there’s more to know about the SUV.

It tries hard to differentiate itself by wearing a larger grille studded with dark chrome. Looks a lot more elite than the Creta’s, especially the way it flanks into the darkened, tri-element headlamp. 18 inchers do duties on the Alcazar and adding to that SUV stance is the sidestep, a segment first. The wheelbase has grown and with it the rear doors as well, opening wider for a graceful entry into the third row. Addition of the quarter glass behind the C-pillar ensures identities of these Hyundai’s aren’t mistaken, and a higher roof aids to this.

I’d blame the Creta for making me think that the Alcazar’s profile isn’t all that proportionate. Yet Hyundai has trickled suave elegance on the rear, appearing to have taken inspiration from an American truck in a segment above. Yet, the dark chrome between the newly designed tail lamps does look premium. Not as whetted as the Creta, but surely a lot less polarising. Overall, the Alcazar easily wins the “look back over your shoulder and smile” contest.

The stylish sheetmetal is matched by dignified interiors that are more than tones and textures – it also reveals the added technology that will help propel the Alcazar ahead in the sales race. The interiors are draped in a new Cognac Brown colour scheme, plasticky bits are now finished in gloss black and perforated surfaces have emerged on the steering wheel and the yatch-styled gear selector. Hyundai has thrown in a 10.25-inch all-digital instrument cluster which to me, is the nicest addition of them all. The animation is fluidic, the fonts are easy to read, the screen is vibrant and the pods double up as blind spot indicators. Cool!

Additional cameras on the outside feed in a 360-degree view of the surroundings on the infotainment system. The good bits from the Creta remain, so you still have an electric driver’s seat, seat ventilation for the front row, Bose surround system, a good mix of physical buttons and digital inputs and a very thoughtfully laid out cabin. Hyundai’s BlueLink smart suite has a few added features as well, like OTA map updates and a new command for the sunroof to open. Your daily driving needs wouldn’t need anything more from an SUV, that’s affirmative.

Sure it’s been some time since you hopped on a flight, but you’d not miss it anymore after experiencing the Alcazar’s second row. Unlike the cramped airlines this is spacious, plush and comfortable, with many inspired bits like a retractable tray with an integrated cup holder, sunblinds, a comfortable armrest and a recliner captain chair. The 64-color ambient lighting does add a hint of magnificence and so does the ultra-soft head cushion. On the move, the ride remains absorbent and slightly more superior than the Creta’s, thanks to the addition of hydraulic rebound stoppers that stabilise the ride a lot more.

Certainly, the captain chairs make you feel like a king but is the third row any good? A single tumble-down function on both sides does make ingress and egress easy, but once inside you’ll immediately realise that the third row isn’t the most liberal. Kneeroom is a fictitious term back here, although the headroom and shoulder room are plenty. What does help in making it less penalizing are twin AC vents with blower speed control, adjustable headreads and USB chargers with storage spaces. The quarter glass does render views of the outside however they’re slightly oddly shaped.

The reason family haulers get such a bad rap is because they’ve typically handled about as well as a box truck, rode like they were suspended from wet noodles, and had about as much power as a Bird scooter. Thankfully, Hyundai has realized they’ve got a lot to lose by cheaping out on dynamics, so the Alcazar has been worked on extensively to deliver the manners that would be required of it. Having driven both the available powertrains – the 1.5-litre diesel AT and the 2.0-litre NA petrol AT, I’d say that the latter feels more suited for the job at hand. Benefits of a naturally aspirated engine are plenty; refinement, smoothness, and linear power delivery. The engine rewards drivers who keep their foot buried in the throttle, and Hyundai claims that the Alcazar can achieve the sprint to 100kmph in just less than 10 seconds.

The diesel on the other hand is a bit of a wallflower. It’s happy to work hard but would prefer it if you just take it easy. Its characteristics feel more than competent in the flow of traffic, with the transmission smoothly shunting from gear to gear, but the engine starts sounding trashy when pushed. Yet, owners would appreciate the high fuel efficiency and predictable driving manners from the Alcazar. What does help entertain drivers a slight bit is the drive select modes, which can be toggled between to stiffen up the steering and transmission attributes. Paddle shifter on both engines does earn some brownie points for the Alcazar.

Maneuverability within the city is of utmost ease, and the Alcazar does a stellar job of hiding its sheer bulk. Be it bits like the position of the A-pillar or shorter overhangs both front and rear, this SUV felt at ease while negotiating tight parking spots, long queues at the toll and a little bit of off-road as well. In all, the Alcazar has been engineered to deliver a calm and plush drive experience within the cabin, something that suit’s its aura well. Nothing more, and nothing less.

The Alcazar is grand the customers want it, be it large families or the chauffeur-driven corporate executives. The internet is going to split into halves, some arguing that the Korean seven-seater isn’t a direct rival to the Tata Safari and the MG Hector Plus. Going by the rule of the textbooks, it probably isn’t. But for the concerned buyers, that doesn’t hold any water. The Alcazar packs in the bells and whistles that are now a necessity in today’s digital era, and with pricing that’s marginally higher than the Creta’s, possibilities of customers opting for the larger of the two vehicles is plenty. What we have here is a very accomplished SUV, one that’s sure to appeal to a wide set of buyers. Hyundai is entering this segment for the first time, and it seems like they already have a winner at their hands. Seems like a tradition for the Koreans, isn’t it?