Hyundai i20 N Line | Across The Line | First Drive Review 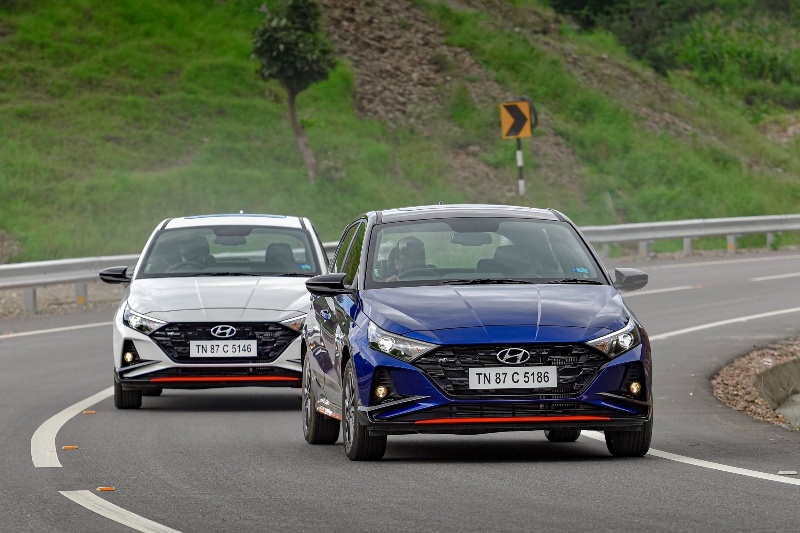 Since the images and videos about the i20 N Line have surfaced on the web, there has been only one question that has everyone baffled-How much of it is different from the standard car? One look at the i20 N Line and you’d be able to point out the obvious changes right away. The front-end is rather sporty looking thanks to strong power lines on the bonnet, and a dual-tone bumper with a red stripe running along. Look closer, and you will also spot the grille that is specific to the N Line. It still is the same shape and size but it features chequered flag motifs with N Line badging that differentiates it from the standard car.

Over to the side, you will spot new wheels that look racy, however, they are 16-inches as well, so not an upgrade from the standard version. What is nice though, is that there is plenty of N Line badging like on the wheels and fenders along with red strips on the side skirt. There has been no structural change, so dimensionally, the N Line is the same as the standard version. What you also get exclusively for the N Line are disc brakes for the rear wheels and a nice sporty spoiler with winglets adding to the overall aggressive design.

The rear, again, is quite similar to the regular i20, but what pops out is the twin-tip chrome muffler that looks like a shotgun sticking out the back, and a faux diffuser as well. Now a lot of these changes are purely aesthetic additions, they do work in giving the N Line a distinctive appeal and helping it stand out at the Hyundai dealership. The ‘Thunder Blue’ paint is also exclusive on the N Line.

The interior carries over the same thought process. The dashboard layout is similar to the standard version, but there are plenty of spruced up bits that set it apart. Like on the outside, you have a good dash of red all around the cabin. The AC vents, switchgear and even the piping on the faux leather seats have contrasting red. Speaking of the seats, you get a racier upholstery and the steering wheel is what will be the big differentiating factor. The new three-spoke steering might not have the flat-bottom that is the hallmark of any sporty car, but it does have perforated leather and is chunky to hold. We sampled the DCT version too, which featured the paddle-shifters that are equally impressive in terms of size and positioning.

Like mentioned earlier, there has been no change to the dimensions, so space is still the same. That means plenty of room in the front and the rear. What the N Line also gets is the typical Hyundai treatment when it comes to the features list. There has been absolutely no compromise as you get the full monty on the top-spec N8 trim. Sunroof, wireless charging, LED headlamps and taillamps, metal pedals, 10.25-inch touchscreen with Apple and Android connectivity, BlueLink support with a hoard of options and the list goes on. Exclusive to the N Line are clever bits like voice commands for the electric sunroof.

Now all said and done, the i20 N Line is for those that prefer to be behind the steering wheel. Driving dynamics have been touched upon and revamped so let's not faf over the mighty equipment list too much. Straight up, the first thing to check is the exhaust note. Now bear in mind, there has been no change to the performance figures and what powers the N Line version is the same 1.0-litre turbo-petrol engine making 120bhp. It is plenty for a car this size and the standard car is quite zippy to be fair. However, on a performance-oriented version, the first update you expect is gain in power.

Still, as you start it up, it isn’t a big jump of joy. The exhaust note at idle is rather faint and there is nothing but a slight thrum. Get going and things improve vastly. The sound is amplified and the burble is louder as well. But if you want a nice raspy tune, you will have to wring its neck and keep it in the higher RPMs. Lift off, and you will even be greeted with some crackles and pops. They are faint and you will have to dial the music down, but pay attention, and you will hear them.

The next noticeable update is the re-tuned steering. Hyundai has added more heft and tuned it for a better feel, and it sure feels different from the lacklustre one on the standard car. It is light and easy to use in the city, and as you gain speed, it weighs up beautifully. There is a good amount of consistency to it, and enthusiasts will definitely appreciate this change.

What they will also love is the tweaked suspension. A critical part of improving handling is getting the suspension right and Hyundai has sort of managed that with the N Line. The dampers are up to 30% stiffer and that has helped it get a more pliant and composed ride in the corners. The body-roll is much better contained and it pitches and wallows a lot less. Thankfully, it isn’t firm enough to be uncomfortable over bad roads. At low speeds, it takes on broken patches with ease, and as you gain speed, it flattens the car out. Something you will notice on a stretch filled with long corners and tight hairpins.

What is also a big plus are the rear disc brakes. The bite and pedal feel are excellent and the strong stopping power gives you tremendous confidence while braking. That said, a small hiccup with the N Line is the unavailability of a clutch pedal. The N Line gets the option of a 6-speed iMT and a 7-speed DCT, and while they both are up for the job of zipping around quickly, they just don't have the engagement of a proper manual. I guess that breed is on its way to extinction. Still, you at least have the extremely good-looking gear shifter on the iMT that you can get your manual fix with. And if that isn’t good enough, the fast and smooth-shifting DCT will be more than enough. The paddle shifters work very well and it even gets a sports mode that makes it more responsive.

It all seems more of a marketing bit from the outside to help the i20 sales, but truth be told, there has been a lot riding on the N Line brand. Conceived in Namyang and developed at the famous Nurburgring, it carries a lot of significance, and that shows in the product. The i20 N Line is noticeably different from the standard car, and that was the whole point of it. It might not have had a jump in power, and we would have liked a lower stance with a louder exhaust, but for everyday driving, the N Line offers a lot.

Available in two trims for the iMT (N6, N8), and with the top-spec N8 trim for the DCT, the i20 N Line is just Rs 50,000 more expensive than the standard version. Add to that, the strong Hyundai backing with long warranty periods, and one of the best after-sales and service, and you are looking at a very strong product that is good enough to make you forget about its only rival. If you are in the market for a sporty-looking do-it-all hatchback, the i20 N Line is the i20 to buy.