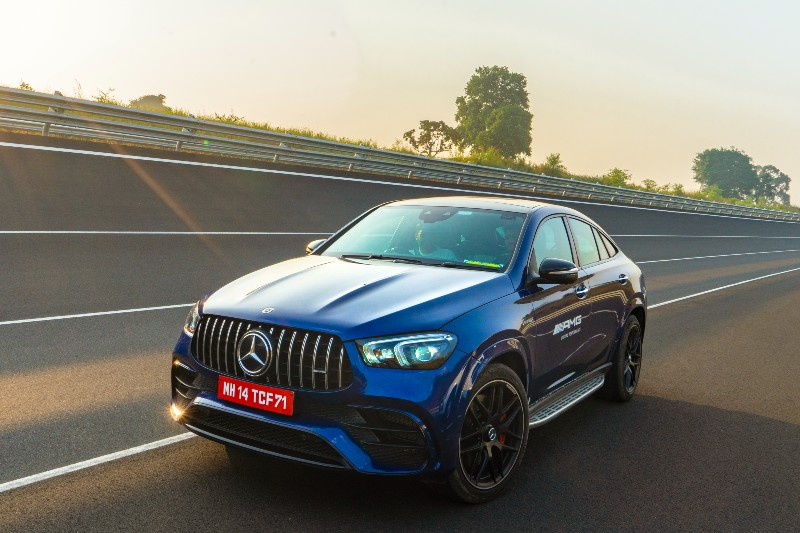 Welcome to Asia’s longest high-speed track, right here in Indore, and what we have here is one of those exceedingly silly cars that the Germans love to innovate upon – the Super-Coupe-SUV. AMG is responsible for the majority of these monstrous elephants, and the latest to land on our shores is the AMG GLE 63 S Coupe that now churns out 612 bhp from its 4.0-litre bi-turbo V8, coupled with a 22hp electric boost from the EQ Boost starter-alternator. That’s more powerful than even the Porsche Cayenne Turbo. Dayum.

Other super-SUVs such as the Lamborghini Urus, Aston Martin’s 542bhp DBX, BMW’s 617 bhp X5M, and Audi’s 591 bhp RSQ8 should be in your consideration set if you desire super-fast mountain clawing monsters that come at this end of the spectrum. But this hippo weighing in at 2.45 tonnes can hit 0-100 in a mere 3.8 seconds. Keep it pinned and it will hit its electronically limited top speed of 280kmph. And since we had an 11.3 km infinite loop at Natrax all to ourselves, ain’t a no better way to find out how a super SUV feels at 300 km/h!

The 4th lane of this 11.3 km banked loop of the high-speed track allows a car to be tested up to speeds of 375 km/h. Starting off the line in the GLE 63 S Coupe, you are shoved in the back of the Alcantara-ish leather seat with a soft pillowy nudge on your bottoms. But it’s the volcanic soundtrack that draws you into the drama that’s about to unfold. It is one of the best-sounding turbocharged engines - brooding burbles at idle and proper crackles as the revs build up.

Since we weren’t allowed to do proper launch control, we simply scurried off in Race mode (toggled via a rotary knob on the steering wheel), and speed built up fast! 100 km/h came up in about four seconds, 200 was up around the 16-second mark, but it’s the build-up towards 300 that felt like one long wait. And all this while, the composure levels were impeccable, something I didn’t fully expect of a floaty-looking giant SUV. But it’s a thrilling experience nonetheless! And finally, at revs of 5800 rpm in 7th gear, it managed to touch a mind-numbing speed of 295 km/h and pretty much stayed there! I did keep pushing through and through, even had a second go, but it wouldn’t budge beyond that. Devastatingly fast experience that made me realize it’s the highest speed I’ve ever touched on Indian soil yet!

And for all its bulk, you can forgive the GLE 63 S for not being the most agile as a Porsche Cayenne Coupe, but what it does better is magnanimously put all that power down cleanly while transporting up to 5 passengers pliantly using air springs and supple engine mounts. that makes even inter-city commutes just stress-free. The view out from all the windows is pretty good, and the large sunroof brightens up the otherwise grey inlays. Ample space in both the front and second rows as well as sun blinds in the rear windows. There’s little compromise on the feature list: soft-close doors, keyless go, cooled, heated, and massaging seats up front, a 12-speaker Burmester sound system, Mercedes's "Me connected" car tech via your smartphone, AMG dynamic modes, performance apps, and even a system that allows you to time yourself in a straight line, as it simulates a drag race.

So, Is she worth the drama?

The AMG wallop-rocket has a brooding burble at idle, and a proper cackle as the revs build. And if you could afford to run it (with its paltry efficiency despite than EQ boost), then yes, you should buy one. Besides its cosseting manner, it's an accomplished cruiser, with twin 12.3-inch screen interfaces that are crisp to use, and if you’re a stickler for detail, then this interior with its knurls and ambiance will wow you. As standard, there are heated massaging seats and 64 colors of ambient lighting. It’ll even tow a caravan or another off-roader or whatever the hell you like, and there are Snow and Trail modes to boast. I don’t know of any other car with a Trail Mode, a lap-timer, and launch control built in all in one!

So, suppose you’re a wealthy speed enthusiast driving daily through our bombed-out roads and desire the best-of-all worlds, with added aural drama that comes along at this upper echelon of super ridiculous SUVs. In that case, this AMG is going to be really hard to ignore. https://www.topgearmag.in/mercedes-benz-launches-two-new-variants-of-the-gle-lwb-in-india/