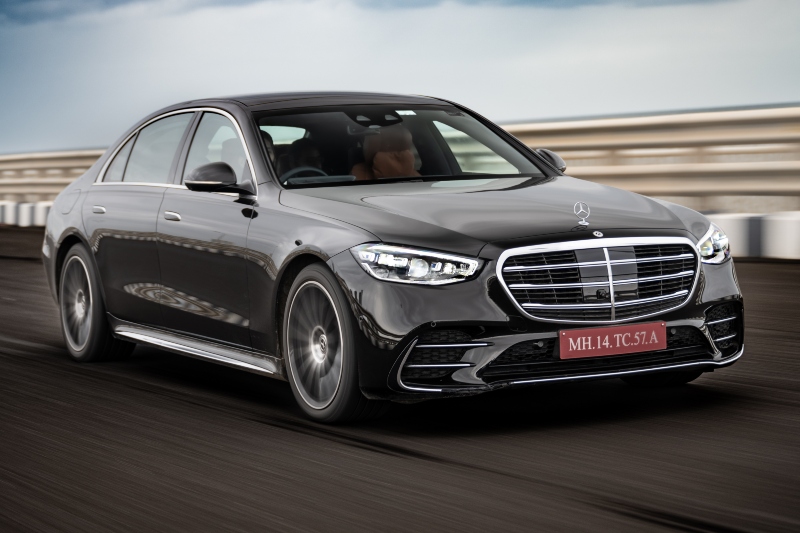 You begin to ponder its magnificence as your eyes ogle every crease on the elegantly crafted S-Class, which also happens to be one of the most aerodynamic cars in the world. Surprising, given how it totally disregards everything that we’ve learnt about loud spoilers, ugly ducts and rattly diffusers. But then again, this is the car that introduced the world to airbags, four-channel anti-lock brakes, adaptive cruise control and double-glazed windows. Retrospectively, the S-Class has always defined what technology would be standard on cars built 15 years from now.

And pushing the boundaries of luxury and tech is this all-new S-Class, the W223 if you’re so inclined, arguably the biggest reset since the Sonderklasse first arrived in 1972. There’s newer connectivity, added-screens, a slew of electronic wonders and an increased obsession towards autonomy. In modern countries the S-Class’s Drive Pilot system can call on level-four autonomy so that the car can park itself, and a level-three autonomous driving capability which can assume full control on expressways during daylight hours. You could argue that the ultimate chauffeur-driven car has been autonomous for years, however this new one lets you sit behind the wheel and still not drive. We’re assuming no excuses were left unaccounted for those important, multi-million dollar email confirmations.

Measuring 5,289 mm from bow to stern, the all-new S-Class increases its heft for an imposing stance worthy of a flagship status. It looks more curvaceous than the outgoing model, keeping true to classic sedan proportions with a stretched hood, sweeping C-pillar, and bold front end. The grille, as usual, has grown, the body-sides and flanks are simpler but still magnificently surfaced, the head- and tail-lights simpler to look at it but now containing the most phenomenally complex illumination technology. With Digital Lights available as an option, the ultra-range headlamps can illuminate 650m of the darkest paths. And it’s intelligent, adapting to the pedestrians and on-coming traffic by slewing the beam.

But what’s the S-Class like to drive? The immediate answer is – incredibly quiet. For the first time, Mercedes is using acoustic foam in key parts of the body, which is fitted early in production and then expands in the oven during cathodic dip painting. Most brands that crow about aerodynamics do so to generate loads of downforce but with this luxury limo, the effort has gone into making the cabin as library-like as possible. Even with the diesel engine in our 400 d was almost inaudible, except under hard acceleration. Ride comfort at cruising speeds is just as impressive, adding to the impression of refinement. Yet sudden potholes in urban areas weren’t dismissed quite perfectly as we’d hope.

It’s stretched out proportions might worry the driver in the front but fret not, Mercedes has got you covered. The big dynamic advance is the optional four-wheel steering. While this tech has been around for decades, it’s never been used as aggressively. With upto 10 degrees of rear steering, the S-Class has the same turning radius as an A-Class. The body roll is well contained, the steering feedback is precise (the chunky wheel is great to hold) and the ride is definitely tuned keeping comfort as the top-most attribute. Air suspension is standard comes standard with the S-Class, but if like being hushed around, you’ll want the optional Active Body Control system.

Horses on this chariot come from a 3.0-litre turbocharged straight-six engine, which I have to say, is more refined than some petrol engines in the business. And it goes better than some too. With 327bhp and 700Nm of torque going to all four wheels, the S 400 d is capable of attaining 100kmph in 5.4 seconds. And it gets up to speed in such a relaxed way, never disturbing the driver or passengers by straining its muscles. As is the Mercedes way, there are four different drive modes: Eco, Comfort, Sport and Sport Plus, as well as an Individual one to tweak steering, throttle and damping. Unsurprisingly, Comfort is the one that suits the car’s character best, rendering an unrivalled ride when cursing down the expressways.

What’s the best way to describe the superyacht-inspired cabin? With up to five high-quality screens, you’re made to believe this is Iron Man’s workshop, but with more leather. Nobody has ever managed to blend high technology with traditional ideas of luxury so convincingly. Heart of the cabin is a 12.8-inch OLED touchscreen that floats above the dashboard dominated by an expanse of polished wood. Now packing 50 per cent more processing power, Mercedes is also proud of the way the second generation MBUX is networked, to the extent that its Interior Assistant recognises eye-direction, hand gestures and body language. Nearly all multimedia controls are housed on the screen, yielding 27 fewer buttons than the outgoing S-Class. The large screen has a slight learning curve for certain functions, but we found this latest MBUX system to be the most intuitive Mercedes has released in a long time.

The menus are far less complicated than before, and you can always say "Hey, Mercedes" to control various functions using your voice. A few physical buttons positioned below the screen provide quick access to the drive modes, cameras, safety features, and volume. Mercedes kept some redundant controls with two small touchpads on the wheel. The right-hand one controls the infotainment screen, while the other changes the 12.3-inch instrument cluster which also features 3D graphics and new gauge styles. Instead of classic gauges, this screen can project the navigation map, with a new augmented reality head-up display projecting blue lines into your vision as if the real world was a Mario Kart track.

In the long-wheelbase form (mandatory with the 400 d), rear passengers benefit from an extra 110mm of space between the front and back wheels. With the Executive package, we were able to kick our feet up using the power ottoman. The chairs themselves contain 19 massage motors that get to duties once one of the 10 different message programmes is specified. Exceptionally brilliant entertainment via the 1750 watt Burmester 4D system, which incorporates 31 speakers and eight exciters, with subwoofers built into the back of the front seats. Then there’s the optional Energising Comfort programme should you be feeling fatigued. It’s actually really good. And effective.

Posh SUVs might be encroaching on its turf, but once again the S-Class pushes boundaries with game-changing tech and even more focus on refinement. This is the biggest leap forward since the first S-Class was born some 50 years ago and, alright, the exterior styling is slightly mundane, the interior is anything but. The exquisite balance of luxury with new-age tech, the added quietness in the cabin and the intuitive second-gen MBUX, all contribute to deeply satisfying driving experience.

With a sticker price starting at Rs 2.17 crore onwards for this ‘Launch Edition’ (limited fully-spec’d CBUs), the all-new S-Class might seem overly expensive over the Audi A8L and the BMW 7 Series. But let me put it this way – this side of a Rolls-Royce, no other car will tour you around with such comfort, luxury and style. Seems like a bargain all of a sudden, doesn’t it.

Pros: Everything about it – ride, comfort, tech and space

Cons: CBU route makes it expensive over its traditional rivals