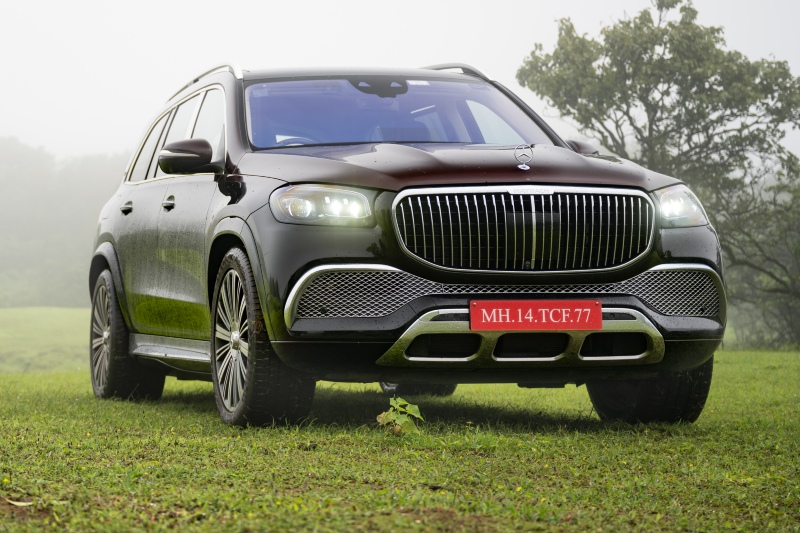 The Mercedes-Maybach GLS 600 is a lot more than an SUV. It is a statement. It is a medal to yourself that says you have achieved a level that not many have. It is an inspiration to those who see it on the road in amazement and wonder if they will ever own something like it. It was at least to me when I first lay eyes on it. The humungous proportions, excess bling and unabashed opulence, are a bit intimidating at the beginning. You expect someone in a black suit to push you further from the car as he latches a ribbon around it. It seems unapproachable with the myriad of chrome upfront and the massive grille with Maybach embossing. The chrome mesh on the bottom and the in-your-face stance is all too much to handle at the first go.

I walked around it while taking in how much of it is different front the standard GLS. The chrome I mentioned, gigantic wheels, the signature dual-tone paint, more intricate headlamps and taillamps, more prominent and blingier grille, and to top it all off, a superbly done pinstripe that extends the length of the car. It made me smirk each time I noticed a nuance, and the will to own one was getting up with every step I took around it.

And just when I thought it had blown me away, I opened the door. And when I did, I am assuming that was what Alibaba felt like when the cave opened up. Everything inside was glistening and shining and the waft of the energizer perfume along with the fresh leather and a retractable footboard to hop in was a fitting welcome into the cabin. Thanks to the force of habit, I completely missed the point of a Maybach and climbed into the front seat first. Still in awe of the sheer opulence, I noticed my doubts about it not being a big jump from the standard GLS fading away. It is. Everything inside was special, right from the polished wood on the steering to the seats and design. Sure, it had the familiar theme of a modern Merc, but it had been tastefully remastered to be fit in a Maybach.

Needless to say, the basic features you would expect on an eight-figure priced car were all there. Seat ventilation and heating, a mesmerising panoramic sunroof, MBUX with a touchscreen and a 360-degree camera. But what the Maybach owners would want was also in plenty. Richness to the cabin thanks to burgundy and cream upholstery. Plenty of polished wood and brushed aluminum. A host of massaging options for the stupidly comfortable front seats and the other barrage of controls for the chauffeur.

As I was getting over the fabulous interior and dashboard, I happened to glance in the back, and I subconsciously wandered out of the car and into the rear of the Maybach. Now, this was absolute luxury. It was nothing short of a first-class airplane lounge, and because the GLS 600 misses on the third row, the back seats are placed way behind. This lead to a back seat fit for a king. The space was hysterical, and I could only giggle at the amount of stuff I could do from back here. First, there were the screens on the back of the front seats, and then there was a tablet in the centre console that again mimicked a smart home remote. There was nothing that I couldn’t control from that piece of glass. The blinds, temperature, infotainment, massaging, you name it.

Sure enough, the centre console was a whole thing in itself. A wireless charging dock, a whole tree’s worth of beautifully polished wood, temperature-controlled cup holders, a mini-fridge with space for two champagne glasses and a champagne bottle as well. The other highlight was the ambient lighting. It might seem like a mole of a mountain, but you see a different side of the Maybach when the sun bids adieu. A trance club with the interior bathed in hues of greens and blues. Speaking of which, the 3D Burmester sound system is good enough to transform you into a different realm. As Phil Collins went berserk on the drums, I could really feel it in the air that night.

To make the most of the Maybach, I even set out at midnight to escape normality. Power is something a Maybach owner is no stranger to, and on the GLS 600, there is plenty of it. The 4.0-litre twin-turbo V8 makes 550bhp and 730Nm, all of which is enough to hurl this palace on wheels from 0-100kph in 4.9s. That just might be the most pointless number in the whole brochure. For your chauffeur, the GLS will be a delight, and on those one-off days you wish to drive, it has enough to bring out the hooligan in you. What will bring out an ear-to-ear smile, though, is the ride quality. The air suspension gets multiple modes and a ‘Maybach Mode’, which is to be experienced. Nothing is allowed to compromise ride comfort, and nothing does. The GLS was gliding on the road as if it were floating in the air. The insulation of the cabin, double-glazing on the windows were all instrumental in keeping me as fresh as the fog that had gathered as I made it to the top.

I disembarked, this time using the much useful Maybach branded floorboard, and realised it didn’t matter what my opinion was of the GLS. It didn’t matter how much of an expert in cars I am or my take on it. The ones who can buy it have already bought it. The ones who want to will do so too. What it made me realise, though, was never to stop the grind. It is an SUV that will motivate you, charge you up and help you look into the distance. If you want to own one, I strongly urge you to sample it once. Because once you do, you will only want to be rich enough to buy it one day.