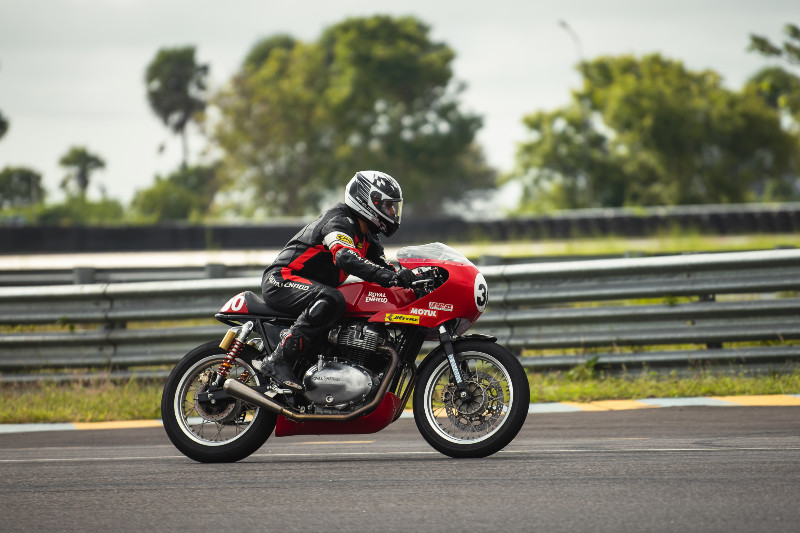 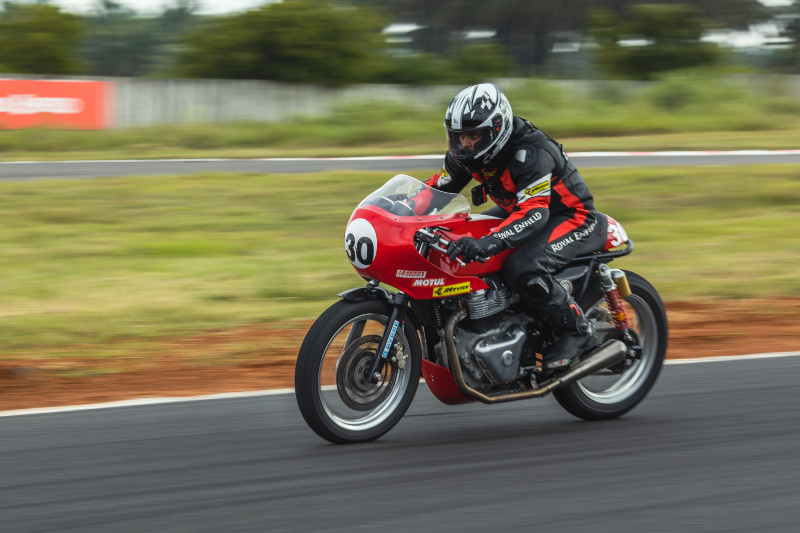 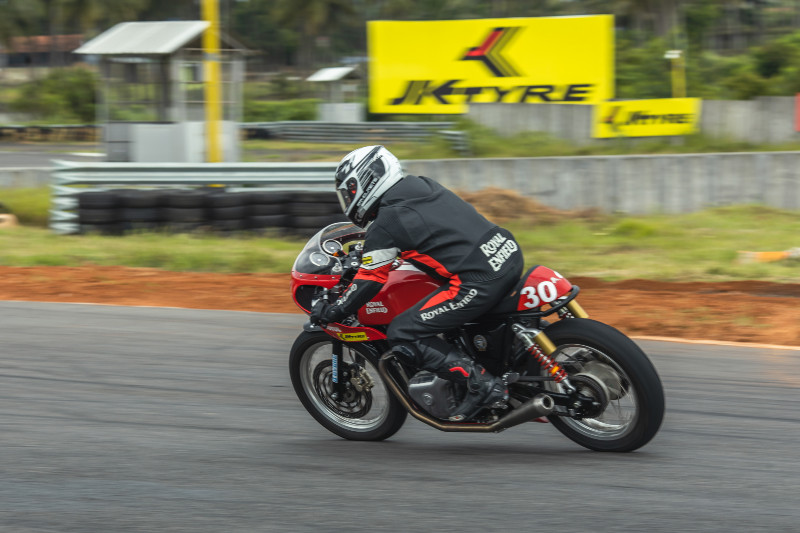 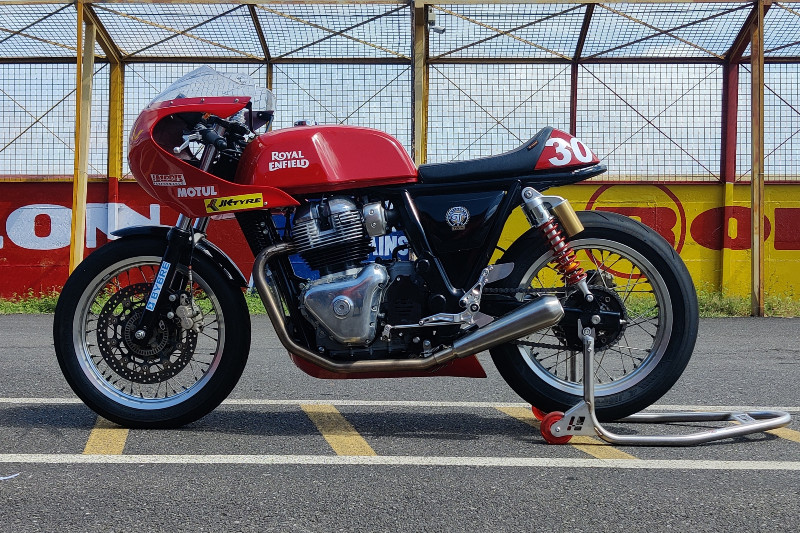 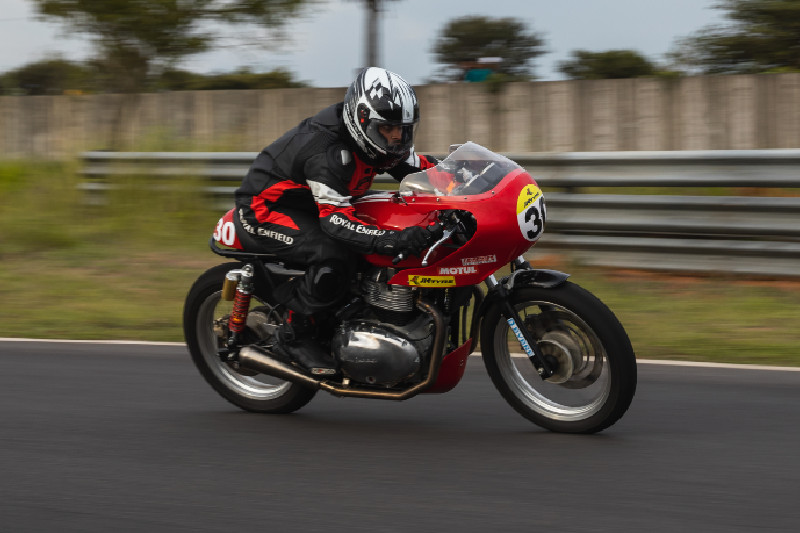 Racing on a Royal Enfield bike! Puzzling, right? Even I was ! Discovering Royal Enfield hitting on a race track with One-Make-Champion-spec GTR-650 is something crazy. The brand luring the adventure fanatics is now scooting the racer’s breed. RE announced its foray into track racing with Continental GT Cup last year, and the first season itself was an enormous success without even a single mechanical issue whatsoever. India witnessed bona fide retro racing action like never before. Something unique, something fun, something rare and everything exuberant best describes the RE Continental GT Cup.

The race-spec Continental GTR-650 is the brainchild of Mr Aspi Bathena ( Ed- Bike India and one of only two Indians to have raced in the Isle of Man TT). The bike is built on the standard Continental GT 650, wherein various modifications have been made to make it a faster and more capable race machine. Starting with- the exhaust system is replaced with a custom-built stainless-steel unit, which in turn not only makes the bike lighter but also makes it a little more powerful. It’s a race bike, so the suspensions are meant to be tuned to the stiffer side. The front fork gets thicker viscous oil in it with preload adjustability, and the rear unit gets a taller nitrox suspension set up to offer a bit more ground clearance during the cornering. Other changes include – lowered clip-on handlebars and adjustable aluminum rear-set footpegs, making it more ergonomically committed. The GTR-650 also gets zero electrical whatsoever; no ABS, cornering stability and other gizmos. The braking system is now improved from last year with the introduction of insulated well-optimized brake pads that minimizes the chances of brake fade. And then there are specially developed race tyres by JK Tyres for the GTR-650, which makes it even more race-ready.

The torque-monster 650 parallel-twin engine remained stock without any mechanical changes, apart from the exhaust unit. The power is reported to be bumped by 12-15 per cent, and weight is chopped by around 20-25kgs, making it lighter and faster. The sprocket teeths are now less than standard GT650 that make it suitable for the technical Kari Motor Speedway. The re-sprocketing resulted in a tighter gear-ratio, making it hit the rev limits easily.

I would run out of emotions to describe how eventful it was to watch the selected RE riders racing out on track. Fierce, ruthless, entertaining and intense would best summarize retro-racing in a nutshell. The next day, it was our turn to experience the GTR-650 on the track. I was pretty nervous about hitting the track, but a few fellow journos uplifted my spirit and motivated me to experience the bike with caution.

The first prominent challenge was getting used to ergonomics, and once I got used to it, I needed another lap to understand the know-how of the track. And by no means will you get acclimatized in such a short span of time. But once you do, you push yourself harder. And the bike lunges ahead with eagerness once you throttle it out. Due to shorter drive-ratios, we need frequent gear shifts to extract maximum performance out on straights. However, in the corners, these drive ratios help it to be zippier. The stiffer suspension aids in sharper handling, which was quite evident on the track. The only problem I encountered was the front wheel wobbling to some extent when going hard on the corners. Moreover, despite being weight-saving measures, the GTR-650 still weighs around 175-180kgs, which is still quite a heavy bike to muscle around. One requires a great level of fitness to play with the bike as it is not very agile and flickable.

After around 15-minutes on the track, I was contented with the thrilling emotions. I was confident and faster but by no means close to pro racers and senior journos. RE GTR-650 is something very unlike you will ever come across in today’s day and age, and RE has honestly put in great efforts to bring these all into action. These bikes do not meet emissions norms, so one must participate in the Royal Enfield Rider Selection Program to experience the bike. Experiencing GTR-650 made me re-conceive and re-explore my ways of getting faster and better on the track. Track Riding School, here I come soon.