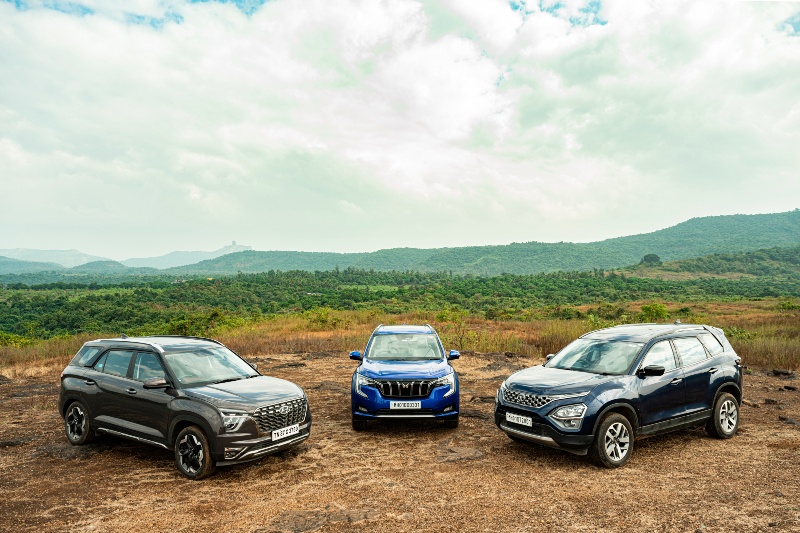 Overview: Clash of the Family Haulers

So you need an SUV with 6-7 seats to act as the family runabout, and because you care about the way it looks and has all the modern-day creature comforts, it needs to stylishly feature-packed. It also needs to shout about that fact, because what’s the point in doing something different if your neighbours don’t notice it. Oh, and it needs to be economical and cheaper to buy than the most-loved MPV options because to accept a compromise on last row practicality you’re going to have to really love the other stuff. For the face-off, we have three particularly fine examples: the newest XUV700, the legendary Tata Safari and the Hyundai Alcazar. And before anyone gets too excited, the cars in pictures with their respective specifications do not compete directly (the XUV700 and the Safari being diesel with auto transmissions and the Alcazar being a petrol manual), but are here to represent the practicalities rather than pure performance. Thus the spec-off has been done with the Hyundai in diesel guise for more relevance.

First up, the XUV700. It’s the newest in this trio, bigger and better in every way than the previous XUV500 that existed. It does not skimp on making its presence felt with those extra-large headlamp units, and some quirky details such as the new logo and flushed door handles. It feels the most youthful of the lot, fully in charge of the daily 9-5 executed in style, yet finding time out for the late-night club-hopping with friends. Imagine casual formals. More like Polo Shirts with Chinos.  It’s a full seven-seater, with a bench seat configuration in the middle row, and there is plenty of space. With 5 seats operational, you do get 450+ litres of boot space, but official figures are still awaited from Mahindra. The rearmost seats are a little upright, but you can get small-sized adults in there if you slide the middle seats forward, and the fold ’n’ tumble action for the middle row is easier than on the bench-seat version of the Safari. The Alcazar is an easy, friendly and more family-like character. It sits much lower and feels the least imposing compared to the other two, but has the longest wheelbase of the lot. It's technically a 5+2 in 7 seater guise, but that extended wheelbase translates to better boot space with all rows up - a meaningful 180 litres of it. It’s got the most bling to spice up any corporate environment with gunmetal accents everywhere. It’s smart, easy-going nature is what will attract you, more like proper formals or a 3 piece well-fitted suit that’s desirable and a reliable choice. Parked amongst this trio, the Safari feels the most adventure-seeking and intimidating given its muscular stance. It’s aged beautifully with that split headlamp set-up shared with the 5-seat Harrier, but it has aged. The Safari’s stepped roof, roof rails and upright tail do really help it stand out given its actually no larger than the XUV700. With its go-anywhere, do-whatever attitude, it sure is made for things you’d hardly do on weekdays. Imagine wearing cargo pants with a leather jacket and taking a detour over terrain you normally wouldn't set your eyes upon.

The XUV700 has some quirky details but what you will not argue about is its simplified and more mature organic design language inspired by the outgoing XUV500. The new M Logo which may seem a W is the most prominent change, and will take some time getting used to. The large C-shaped sharp headlights have a peculiar design, but on the road will catch your attention. The overall silhouette is almost identical to the XUV500, but the flushed door handles and creases flowing across the body-line gives it a cleaner and sharper appeal. The rear feels plain Jane with some plasticky cuts and creases and the sequential turn indicators do feel upmarket.

Moving on to the Alcazar, let’s just call it a stretched Creta in a crispier outfit. The gunmetal chrome accents all around give it a premium look and to some, it ends up looking more expensive than the other two. The added third row gives it the longest wheelbase in this trio. The alloy wheels choice and the all-LED headlights work well, though the rear design of the car leaves a little to be desired, but sure looks more corporate and family-friendly at the same time.

The highly anticipated legendary comeback from Tata, the Safari may be love at first sight compared to its last generation. It's gigantic and means business. It’s smart looking and subtly at the same time. The overall silhouette is an elegant one, the Discovery Sport DNA held within its Indian soul - ever-ready to pounce on the road and eat up as much tarmac and bits of vivid terrain you can possibly throw at it.

Let’s start with the most car-like SUV in this group - the Alcazar. It's the easiest to get in, and feels the most luxurious here (never thought I’d say that for a Hyundai!). And this is really down to the two-tone interior with mocha brown leather trim, gloss black finished surfaces and just the right soft cushioning on the seats with a great sinking in vibe. The dash layout is identical to that of the Creta, with a fully digital customizable instrument cluster. The second row of seats could have been more spacious, lack side lateral cushioning on the ends of the 7 seat bench on test, but do offer a recline function. But a glaring omission was missing cupholders in the centre armrest for on-the-go coffee lovers like me! Regarding the third row seating, best left to kids or adults you're less fond of.

Step inside the XUV700 and first impressions are lasting ones! You're greeted with a plush white interior trim, a really wide slab of black glass in the form of a twin-screen setup, powered driver seats with controls on the driver’s door pad - straight off from the latest Mercedes SUV lineup. The seating position is nice and high-set, with good ergonomics and most controls within easy reach. The seat cushioning is accommodating for plus-sized adults too but you will be nudged around while attempting some high-speed cornering. The second row of seats are comfortably firm, with a great sense of space aided by the panoramic sunroof. The left rear passenger also gets the boss button to move the front passenger seat out of the way to increase legroom. The third row is the most comfortable in this group, but not in the league of a traditional 7 seater MPV.

The Tata Safari, for the larger than life-size and imposing stance, the interior is starting to look dated. The sea of black on the top level of dash trim seems more hard-wearing and even though it is the roomiest of the lot, ingress and egress is not the easiest unlike the other two. The second-row captain seats are large and firm, but the under-thigh support is on the firmer side which can be a tad uncomfortable on long journeys. Ingress to the last row is relatively easier thanks to the space between the captain seats, but once seated comfort and space is at a premium for average-sized adults.

The XUV700 and the Alcazar trump on the technology and features warfront with the Mahindra boasting of segment-leading ADAS safety functions, and more active safety features than many cars or SUV’s in this class. The digital instrument screens are also crisp and easy to navigate but we did miss some useful everyday options like ventilated seats, rear sun-blinds and an auto-dimming mirror. Hyundai was always at the forefront to pack as many comfort features in its cars, and the Alcazar doesn't disappoint. It only really misses out on the ADAS safety technology in this trio. The Safari plays the modern co-existing with convention card with its part digital instrument cluster, smallish but super bright infotainment screen, hard-wearing plastics and controls while missing out on 360-degree parking cams, blind view mirrors, dual-zone climate control and any ADAS functions in this test.

We sampled the XUV’s most powerful powertrain version - the 2.2-litre diesel with 185hp and 450Nm of torque. Frankly, these are segment busting stats! The Tata Safari’s 2.0-litre diesel engine with its 6-speed auto transmission churning out 170hp and 350Nm pales in comparison despite being slightly lower on paper. And the differences are more apparent once on the move. Where the Safari bumbles and grumbles to begin with before gradually building speed and transmitting that power on the tarmac, the XUV feels sprightly and peppy, in a way you just wouldn’t expect an SUV in this category to be. The XUV felt significantly quicker in kick-down acceleration and hits 100kmph in the 10-sec band plus gets 3 drive modes (Zip, Zap, Zoom) to explore all of the engine’s capabilities. The 6-speed auto on both front-wheel drive cars works with great smoothness. Both the diesel units do sound gravelly but refinement is far superior on the XUV. But if it's the ultimate refinement you desire, we had the petrol-powered 2.0 litre, Alcazar, to give us perspective. It felt light, refined and most relaxed to drive, easy turn-ins at city speeds with the most well-controlled body movement. Though power figures when compared are significantly lower, the Alcazar is also 400 kg lighter than the Safari in this test. The diesel options for the Alcazar though are a whole league down on displacement and power in this group. Let’s be honest here, people buy large family haulers because of the extra luggage space, extra seats and all the practicality that comes built-in. But of late, they have started to expect the finer things in these pseudo front-wheel driven SUV’s - finesse, refinement, digital cockpits and ambient lighting while foregoing the best third-row seats or the largest boot.  And for that very argument, you will be hard-pressed to find faults on an otherwise brilliant wholesome package called the XUV700. It's the most plush inside, loaded with tech and features, has the best power plant, and feels sophisticated while being easy to live with. The Alcazar comes close to this feeling with the added dose of Hyundai’s service and reliability trump card, but space-wise and engine specs-wise, it does feel the David amongst the goliaths here.

And it is really within this company that the legendary Safari seems to be playing catch up to the other two. It does exude toughness with a better sense of space in the third row, but with my argument above it is a choice that is hardly easy to make in this company.