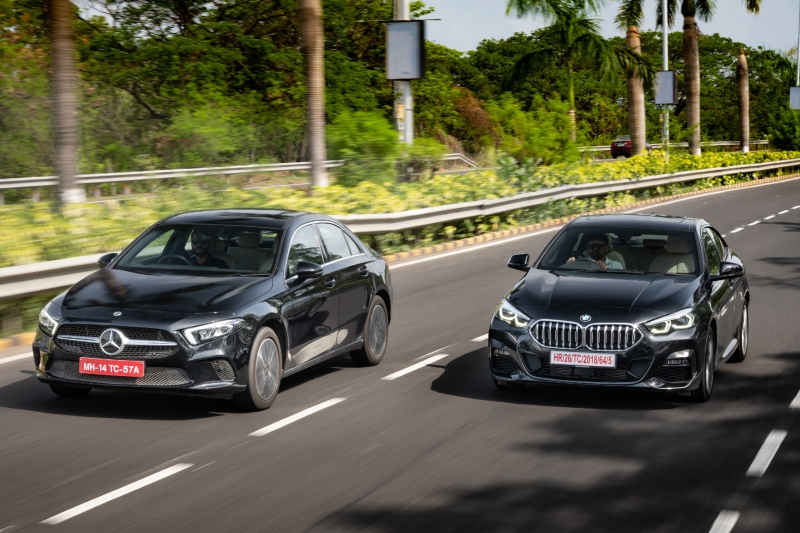 This one is going to be hard, perhaps harder given our affection for luxury and SUVs. The wars between the German behemoths have been raging for a long time, and with the pair’s latest and smallest four-door sedans, they appear to have started at the bottom end of the luxury car owners club.

The new A-Class Limousine is Mercedes-Benz’s second aim at an entry-level sedan, and this time it hits closer to the mark with its wow dash design, roomy interior (over the old CLA that it replaces in our market) and smart connectivity options expected of a 2021 generation car. We’re driving the petrol-powered A200 representing the entry point to the range that consists of just one fully loaded trim.

The BMW 2 Gran Coupe on the other hand in most markets is a rival to the Mercedes CLA, which means in this test, it should zoom past the A-Limo in the style and driving contest. The 220i we have here as is the A200 are both petrol-powered 4 cyl saloons mated to 7-speed dual-clutch automatic gearboxes, albeit in FWD formats – a trade-off for packaging size vs space, efficiency and price. Both are very alluring to impress a first-time luxury car buyer with interiors borrowed from their larger siblings, large touch-screen entertainment consoles, powered seats and beige-y soft-touch materials all around. Each one has a suite of driver modes and safety features to make it malleable to all talent levels too. Being a seasoned luxury car driver and a professional, I promise I’ll reach a verdict. Hopefully without resorting to a coin toss!

With an image of a young, 30-something, rich, style-conscious entrepreneur – one who prefers a sedan that speaks sporty when standing still – you have to start with the 220i in MSport trim here. The frameless doors allow a lower roof and clean-looking apertures. The front and back look dramatic and racy in the flesh especially if you choose that Melbourne Red shade!

The side profile adopts almost all the same feature lines as the 8 Gran Coupe. But while those lines make the 8 look edgier, on the 2 it makes it look a little flabbier from certain angles. And since its architecture is based on BMW’s UKL front-wheel platform, the 2 GC simply misses out on the pushed back stance of its bigger RWD sibling the 3. But if these young something prefer restrained premium and something more, errr understated with a star logo, then the A-Class Limo is the pick. And it starts up front with the CLS inspired grille and lights and a quarter plate sized-three pointed star. The sharp looking rear with those slim angular taillights helps it pass off as a downsized C-Class.

Its an all-new platform, stronger and lighter than before with the longest wheelbase in this class (an extravagant 120mm longer). The same platform lives under the just launched GLA and the B-Class. The A although elegant, fails to appeal on design desirability outside, but enter inside, and it’s a completely different story altogether.

And once you step inside the A Class, you realise it’s insides are not like any other car, especially not in a class like this. The dash is a curvaceous piece of bar furniture, with the huge screen system on top housing two 10.3in screens – one as the instrument cluster and the other for entertainment and all modern connectivity requirements. The centre console’s pushed back design gives the overall effect of a pared-back luxury lounge rather than anything too ‘automotive’. At night, illumination of strategic interior parts adds a nice theatrical and practical note. Some of my friends were simply awed by the ambient lighting on the air vents going blue and red when the temperature was adjusted lower or higher. General material quality is high, and the big-screens are massively impressive for graphics, smooth responses and custom display options. It also features the latest MBUX with Mercedes Me connect to allow remote information of the car being delivered to your smartphone. The seats are a little firm and strangely flat-feeling style, and this feeling is compounded once you seat in the 2 GC generously side-bolstered seats. But again as in any good Mercedes you soon stop noticing them because they’re built for long-haul support.

And this is where the 220i with its grippy MSport steering wheel, superb driving position, angled console towards the driver appeals to the driving enthusiast in you. The faster rake of the A-pillars makes you feel more cocooned inside and this cabin surely has a better air of quality build to it over the Mercedes. All versions have BMW’s touchscreens, but you hardly need to touch it given the option of many press-able hard keys around the consoles and the iDrive wheel. Yes, we still love it, and it remains the industry-best for zooming or scrolling through lists while you’re on the move.

And if you care about life at the back, then the A Class has the better sense of space, legroom and headroom compared to the 2 series. With the beige colour palette and wider rear doors, ingress and egress felt better in case you want to carry a small family with you, or be chauffeured occasionally. But foot space, often the real determinant of back-seat comfort, is pretty tight unless the front seats are raised several notches. Under thigh support is a joke a comparable to a park bench with a low seating position.

On the 2GC legroom isn’t at all bad, but anyone anywhere near average-man height is going to be wedging their skull into the headlining. And the back seat is narrower than the A’s but definitely felt better on the under-thigh support department for a 6-footer like me. The 2 GC trumps the A-Class in the boot space league with 430 litres of a well-shaped cavern with a concealed space saver, compared to the A’s 405-litre space with a space saver sitting atop.

First things first, the A-Class Limousine is not as sporty to drive as its profile suggests. It sits somewhere in between the class in terms of dynamics – not plush enough to feel luxurious, not eager enough to be fun – and thus it lags notably behind the 2 series GC.

The A200 petrol has a boomy-sounding 1.3-litre that also appears in Renaults and Nissans, but don’t let that put you off. With 161 bhp on tap, it’s more than punchy enough for daily driving in the city or the highway, even if it isn’t the most refined. The 7-speed DCT auto is smooth and attentive most of the time too. But it’s the road noise and engine noise that filters through the cabin that’s most underwhelming. Put a nice tune on that gorgeous sound system to drown it out a little.

And if you’re going to be stuck with four-cylinder petrol, front-wheel driven car in this class, BMW’s is the one to be stuck with, and the 220i is a good installation underneath – refined, responsive and with surprisingly honest steering feel. In corners, it feels like any real-world FWD thanks to precise reactions, and resistance designed to understeer, all coming together in a fluid manner. The ride really is sweet, and better than the A200, partly because all 2GCs get a real independent back axle that eliminates some of the gritty harshnesses felt otherwise.

Starting at 37.90 lakhs, the 2 series GC might be the littlest BMW four-door in our market, but the air of plush refinement and build quality makes it feel bigger than you’d expect. Even so, it’s not averse to some sideways fun if you give it a nudge. So if your preference is of pure style with driving dynamics over the practicality of a proper 3 box saloon, then you needn’t look further. As the 2 GC will stand out even in the company of the cheapest 330i sportline.

But if connectivity, interior layout and badge takes priority over driving manners, then the A-Class limousine for many will be perfect. It’s a great feel-good car that’s solid, quiet if you don’t nail it and safe. You also get an 8-year warranty on the engine and transmission, which maybe is Merc’s way to also justify a sticker price of 39.90 lakhs for a sub 1.4-litre petrol engine that may not be the most refined or the most economical. But there’s more affirmation in the fact, that if you buy a Mercedes-Benz, no one will question you.