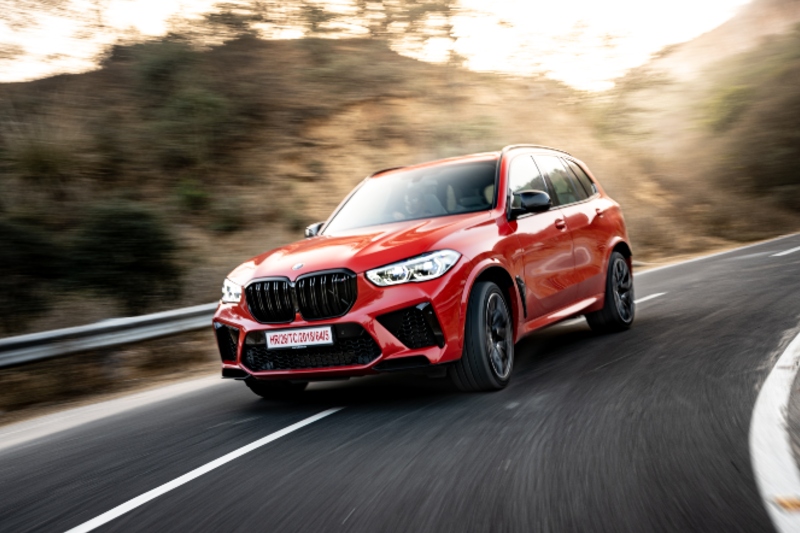 617bhp. Your brain has already visualised something fast that’s sleek, low to the ground and absurdly cramped interior space. That’s because such figures are usually pasted on the technical data sheets of high-performance sports cars. Extremely desirable exotics that are ridiculously impractical for the most part. And in a country like ours, you’re bound by a specific set of routes, and roads that have been tried and tested by enthusiasts to fly their machines. Yes, the concept of grand touring does exist, but how many cars let you glee without having you worry about a detailed roadmap? BMW just might have the solution. After launching the hugely engaging X3 M in India, they’ve now introduced the X5 M Competition. It’s raining M, and I reckon someone at the BMW India office sips Death Wish coffee before every meeting for upcoming cars. Where it does get tricky though, is the pricing. You see BMW already have a wild, raucous and practical performance SUV in the form of the X3 M, so it does make you wonder - is it worth spending almost Rs 1 crore more for a slightly bigger, more powerful version? Waiting outside that very office were me and Aakash, discussing this first world problem when our conversation was interrupted by the menacing-looking X5 M that slowly purred out of the parking. For us enthusiasts, one glance and you know this isn’t your usual X5. But for the rest, here are your ‘spot the difference’ bits– the front wears a redesigned bumper with bigger vents, chrome around the grille is now glossy black and although it’s a massive grille, it fits in right with the X5’s dimensions.

The sides are complimented by M wheels; 21-inches for the front and 22 for the rear. These Competition-specific wheels finished in black do compliment the SUV really well, and adding to the aggressiveness are those pronounced wheel arches. The cosmetic air vents on the side further accentuate its dramatic road presence, and that’s what the X5 M is all about. What also add to it’s manic nature are the massive drilled brake discs wearing blue M callipers along with the aerodynamic rear-view mirrors, that look no less than a piece of art. The characterful rear flaunts ‘real’ quad pipes, and the roof and tailgate spoiler just liven things up. A peek of the fat Michelins tells you this thing means business. While the exterior screams brute performance, especially in this shade of ‘Toronto Red’ with contrasting black bits, the interiors have been finished in white. Soothing and welcoming interiors to compensate for that blood-boiling exteriors. Works for me.

It’s a familiar place once you step inside. The one we were testing was equipped with the optional rear-seat entertainment package that offers two screens for the rear occupants and an upgraded Bowers and Wilkins diamond surround system. You’re also treated with panorama sky lounge that can alter colours basis the ambient lighting, and that should keep the occupants happy for the most bit. But if you’re the one piloting this luxury-SUV, you wouldn’t care less about these gimmicks. What will interest you are the controls on the steering wheel – the configurable M1 and M2 switches that let you pre-set your driving preferences. Great additions to have. The steering itself is nice and chunky and is great to grip. It is from the driver’s seat that you begin to appreciate the X5 M even more. The central console has an array of newly-laid out switches. Gone are the individual control buttons, and in place is a setup button that pulls up the configurator on the infotainment system which can be interacted with touch or joystick inputs. You can tune lots here, even on the fly, and it even gets a toggle switch on the gear selector that lets you alter the aggressiveness of the shifts between three settings.

Thumb the starter button and the 4.4-litre V8 comes to life, rocking the body as it purrs from the quad exhausts. Get a move on and the first thing that’s sure to happen is this a wide grin on your face. The performance, the aural delight, the dynamics, they don’t wait for you to reach a race track. It’s an aggressive machine from the word go, worthy of wearing that ‘Competition’ badge with pride. Initial few rounds with the Sport Plus setting felt a bit too aggressive for the road, so I detuned the monster to Sport and left the former to exploit on a track some other day. The engine pulls hard, it’s free-revving and the twin-turbos spread the power across a wide rpm range, making 750Nm of torque available from as low as 1,800 rpm. The result? 0-100 claimed figures of 3.8 seconds and an electronically limited top speed of 250kmph. There’s just so much grunt and character, and while those numbers might be familiar with this engine throttling many flagship M’s, what’s bewildering is the way in which this gigantic SUV sprints ahead. The throttle responses are sharp, immediate, and complimenting the engine is that eight-speed ZF-sourced steptronic transmission. Set the gearbox responses to its quickest setting, you’d seldom find the need to use the paddle shifters.

Competition models are customarily set up on the firmer side and this one is no different. Even in the most comfortable setting, you’ll feel undulations being passed into the cabin. But this isn’t the SUV to do your airport runs. (If you are running late though, this just might get you there). This is crafted with love to excite your senses, it’s the M supremacy with the versatility of the X and for such a setup, it rides really well. What aids the entire drive experience is the adaptive M suspension with electronically controlled dampers. Show it a set of corners, and the X5 M’s supreme driving characteristics will reward you with immense grip and confidence, it almost hides away the sheer size and bulk of this thing. The chassis feels taut, there’s always good control of such a powerful and massive vehicle and the handling feels agile. It’s also aided by an ultra-modern and ultra-clever M xDrive all-wheel-drive system and the Active M Differential that deliver dynamic on-road performance.

Now if I must nit-pick, I wished I sat a little lower and would have appreciated a more focused treatment for the inside. Something that sets this animal apart from its comfortable, luxury-focused sibling. Slightly bigger tyre profiles would inspire more confidence and the launch control system, well let’s just say it’s really moody. Yet, it’s an engaging SUV to drive, a trait that you wouldn’t usually associate with big, luxury SUVs. It keeps you on the toes and the feedback feels mechanical - from the steering, the drivetrain, the brakes (they do squeak sometimes), the exhaust, and this is despite it having a zillion driver aids underneath. And then there’s the duality that it offers - you can tame down the beast with a touch of a button, and drive it to the supermarket on that dreary day.

Sure, you miss out on the plushness and softness that you would expect from an SUV this expensive but that’s a fair trade-off for all that performance, agility and aural delight. It’s one of those rare breeds that can be hammered around on the track and can still pack in your family and luggage, transporting them back home in comfort. And to answer that dilemma I had at the beginning between this and the X3 M, it is something that will take more than a day’s driving to answer. Although you buy the bragging rights of owning the fastest SUV from BMW, or owning an SUV that comes equipped with the same engine that powers their flagship vehicle, I just can’t get over the fact that if you add some more change to the X5 M, you can have two X3 Ms!

FOR - Bags a lot of bragging rights, Most powerful SUV from BMW, gets tech similar to tech M8 AGAINST - Almost twice the cost of a X3 M which is some serious fun