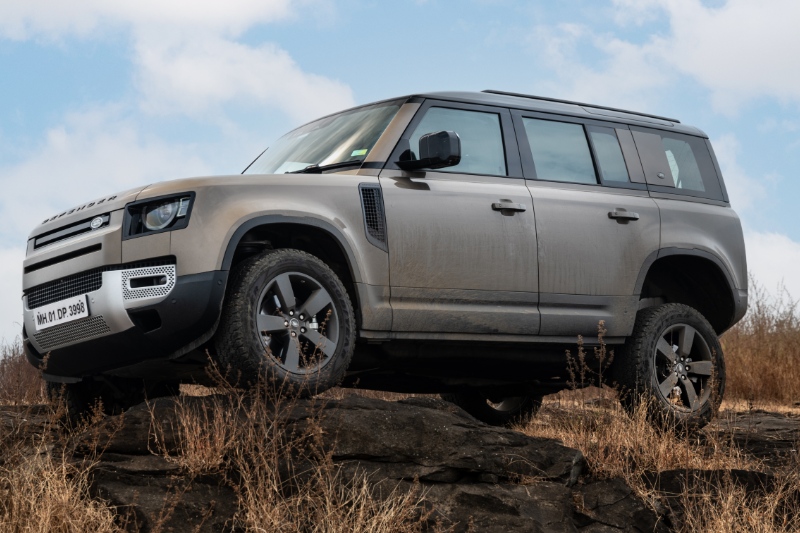 Overview: The off-road Icon is Back

The new Defender is finally here in India! And it has a steep hill to climb. A metaphorical hill to climb. One that is fraught with not just off-road ability and broken tarmac, but faces the daily chaotic grind in the urban jungle while also justifying to be a worthy alternative to our Range Rover loving folks who care more about elevated luxury over muddy racing. The new Defender is available in 90 and 110 forms and this five-door 110 has arrived first, with a choice of a single petrol engine. Prices start at Rs. 79.94 lakhs which means it is actually cheaper than a Range Rover, and because it’s got 7 seats with a more serious off-roading kit, it’s more practical as well. But the old Defender wasn’t a very good road biased car and we’ve never had the previous gen in India! So, the question we hope to answer is - is this new generation of Iconic Land Rover better than ever before, and is it the best SUV you can buy today? Let’s start with that first bit.

The first time I actually heard about the Defender moniker was in the movie Tomb Raider back in 2001; featuring the gorgeous Angelina Jolie driving this rugged looking machine away from goons in a forest, and then subsequently in the James Bond and Mission Impossible movie series. But this new one is quite a departure from what I remember seeing! As per Land Rover’s design boss Gerry McGovern - the Defender needed to be respectful of its heritage but not be consumed by it. And there are clear cues from the old Defender like the flat, almost vertical front and rear, the alpine windows on the sides of the roof, a rear mounted spare wheel and its overall boxy proportions. But that’s where the similarities end. Land Rover calls this new design - Quiet Confidence. But some of us may think it looks to be just a Discovery Sport in Defender overalls. However, that’s actually not true despite it sharing principles with the Discovery’s – because almost everything is built stronger and more utilitarian. I think the exterior design is masterfully executed with a completely modern expression worthy of an off-roader being built today. The boxy-ness is just right for a hard-core SUV. The short overhangs with best-in-class approach and departure angles help. It’s a monocoque construction that LR claims is built to be 3 times stiffer than any body-on-frame setup. Adaptive dampers and air suspension comes standard now, translating to better ride comfort on tarmac.

But Land Rover is definitely not targeting the Sherpas or the Ranthambore National Park Gypsy drivers with this one! It’s actually tailor made for those who prefer driving themselves with its macho presence and a don’t-mess-with-me attitude on our crowded streets. With a ground clearance of up to 291 mm, wading capability of up to 900 mm and a million optional accessories – like a rugged roof rack, a deployable roof ladder, a snorkel attachment, deployable side steps, a side mounted gear compartment, a full-size roof tent, etc – all the perfect ingredients for showing off your adventurous intentions to your 45th floor neighbour! Of course this macho quotient is to be budgeted close to a crore rupees (the 110 SE 5 door model we tested is priced at Rs. 90.46 lakhs!). We also wish Land Rover would have taken this opportunity to further cement the Defender’s iconic rugged appeal in fashion similar to the G-wagon’s retro-iconic cult like image that has exploded over the years. So iconic it is, but they may have gone a little posh with it.

Step inside, or should I say, climb inside (with the air suspension raised to its highest setting), and it feels like Land Rover has aimed for an interior that is both luxurious and utilitarian. And I believe they have simply nailed it. With exposed body sections like the twin grab bars on the dash covered in leather, structural door liners with star-head bolts, washable floor and a rather deep, dinky instrument binnacle evoking of the original defender. It’s a feeling of robust luxury – especially with this model’s car’s beige tanned leather interior.

There are fewer obviously plush surfaces than you’ll find in the most luxurious among its SUV competition (like a Range Rover, a Mercedes GLS or the Volvo XC90) but fit-finish, spaciousness and material choices clearly position it above a Jeep Wrangler or even a Toyota Land Cruiser. The Defender is (unlike the Jeep) super-roomy too, with a wide cabin and loads of rear legroom with recline function. The 110 version features a third child-seat row making it a good 7 seater alternative. It also has a six-seat option, with a folding jump-seat in place of the central armrest area making it the fantasy ride of choice of a seven-year old. There are a lot of storage spaces in the dash and some under the central console. The boot space at over a 1000 litres can be expanded up to a staggering 2300 litres with the second and third row folded – perfect for moving lock-stock-and-barrel to Manali in case of an unforeseen lockdown again! While all controls feel large and easy to operate, what puts the new Defender finally at par with a modern hatchback - is its new Pivi Pro infotainment system featuring a large touchscreen and a crisp display for a lot of the sub menus and smartphone mirroring functions. All the infotainment electronics such as the ‘Clearsight interior rearview mirror, a 3D surround camera, a dozen USB ports, crisp off road visualisations, and multiple driving aids position the Defender right up to modern premium-car standards.

We drove the 110 long wheelbase version with 5 doors (a 90 short wheelbase 3-door version is due later) featuring a turbocharged four cylinder 2.0 litre petrol engine mated to an eight-speed automatic transmission. It puts out 296bhp and 400Nm of torque. Of course, every model features all-wheel drive and locking differentials for navigating treacherous terrain with LR’s legendary auto terrain response system.

But a diesel heart is sorely missed. As the small displacement petrol unit feels puny for a car that weighs almost 2.3 tonnes of SUV, with a real world 0-100 km/h dash in 9-ish seconds and as big 4×4’s go, it does gulp a lot of fuel. What is remarkable, is that the Defender doesn’t feel like a hardcore off-roader, especially when it’s on the road. There’s none of the vagueness or coarseness associated with its competition and everything feels tied together. It absorbs hard shocks, and the wheels don’t shudder over corrugated surfaces and you can travel in luxury car comfort. Almost. It’s no great handler or even very engaging to drive with a slightly disconnected steering feel. A Sport mode has been given a miss, but drive it smoothly and it’ll cruise just fine on the expressway. Where it simply scores is when the tarmac ends; set the terrain response system to ‘Auto’ and you will appreciate its four-wheel drive system with a sorted ride quality enhanced by its air suspension setup. Most owners would seldom take their Defender for an off-roading excursion, but in case they do or have to drive across rain battered roads turned mud tracks - their posterior won’t be complaining of too much side-to-side movement or feeling every boulder’s creaking sound underneath.

After waiting for years to be able to experience and drive this automotive legend right here in India – I must admit that it’s been worth the wait. The Defender is at the pinnacle of Land Rover’s foundation of building vehicles that are so capable in all terrains, that they go well beyond the normal needs of most buyers. But only one in maybe a thousand would be using its capability to the max. For the most part then, it’ll carry mountains of luggage, fit in your extra-large family, transport you in luxury-car levels of comfort between home and your factory or farm house, and with those very same qualities of versatility and ruggedness it will shrug off the dirt and wet too if you ever feel adventurous enough. With prices of higher trims touching a crore of rupees, it sandwiches the new Defender between its own brethren (the Range Rover Sport, the Discovery), serious off-roaders (the Wrangler and the G-Wagon) and luxury 7 seater SUV’s (the Merc GLS, a Volvo XC 90 or even the upcoming Audi Q7). And that’s where it’s a bit of a puzzle to justify a seriously expensive off-roader in a country where back seat comfort & luxury has precedence over off-road ability. But if you’re someone looking for a rugged alternative to a full-size Range Rover (or even a Discovery), and you can make max use of it– there’s nothing else to match the new Defender.