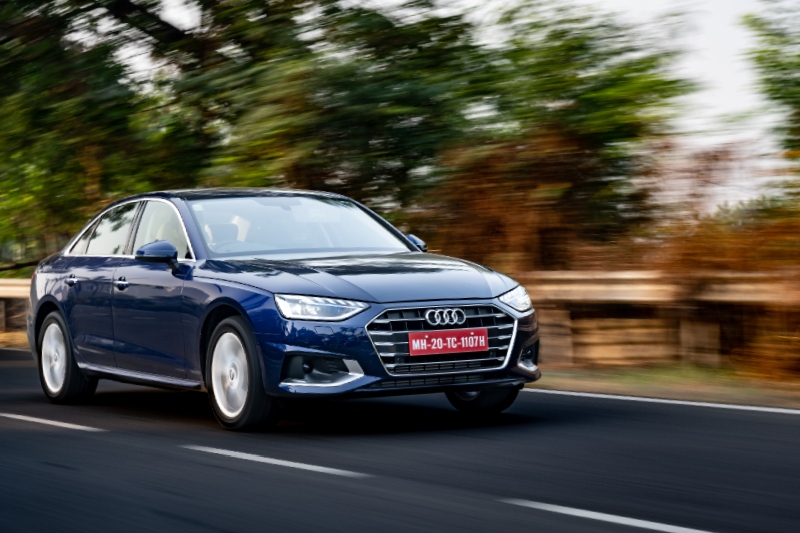 Our affection for SUVs is unparalleled and yet, the first car to be out in the year 2021 is a sedan. Audi has got the ball rolling with the A4 facelift and no this is not to be confused with the A4 facelift that was out not too long ago. That was a minor revision, unlike this one, which is a lot more significant. There are changes to the exterior, interior and even under the bonnet. But are these changes enough to keep the A4 fresh and relevant against it’s new and upcoming rivals?

Like mentioned, this is a facelift and not an all-new car, so changes even though noticeable are restricted. The front, for example, is instantly recognisable but features new LED headlamps along with an updated grille with plenty of chrome and new bumpers.

Over to the side, the silhouette remains the same, but you now have some creases on the body and new wheels as well. That said, the wheels could have been a bit more snazzy as the ones on the press car were rather plain. The rear continues to be in typical Audi fashion of subtle and svelt. Clean lines and right angles give it that wide and premium appeal and it is a rather handsome looking car from the back.

The interior too is largely similar and the biggest change is on the infotainment system. Gone are the toggle controls and a puny little display, and in place is a big 10.2-inch touchscreen with Audi’s latest MMI. Does it have the wow factor of the A6 or the A8? No, because unlike their dual-screen layout, the A4 makes do with just one tablet-like screen that seems to be slapped onto the dashboard. If you’ve got a thing for aesthetics, this might not be the most ideal placement. However, the quality of the screen is right up there with the best. It is fast, responsive and vibrant to look at. The updated software also goes a long way in making the experience a lot better.

Now, thanks to it being a touchscreen, the A4 no longer has the toggle controls on the centre console and what that has done is made some room for a nifty little cubbyhole. Just the perfect size to hold your sanitisers, keys, masks etc. Apart from these two changes, this update is identical to the previous version. But is that something to sulk about? Not really. It is a clear case of ‘If it ain’t broke, don’t fix it.’ The interior was the highlight of this generation of the A4, and even with this version, it is still up there.

Quality of materials is excellent along with the fit-finish which is aces. The cabin feels plush and opulent with the bright upholstery, and everything you touch has a sense of luxury. The switchgear and panels too feel like they belong in a car in this price bracket. Features are in abundance as well, as you might expect. It is a lengthy list, but some of them include three-zone climate control, fully-digital instrument cluster, memory seats for the driver, sunroof, wireless charging and then a plethora of safety and driver aids.

Moving on, the next big change with this updated A4 is under the bonnet. The previous-gen featured a tame and docile 1.4-litre petrol engine, and while it was fine for puttering about, it lacked any engagement or excitement. That is now solved thanks to the introduction of the 2.0-litre turbo-petrol engine. The same engine that also does duties on the Skoda Superb and the Audi Q2. It is the engine that was always supposed to be in the A4. But better late than never. Power is rated at 187bhp and thanks to the swift seven-speed DSG gearbox, performance is more than adequate. 0-100kph takes just 7.3secs and the A4 will continue to pull until its top speed of 241kph. Impressive numbers, but have they made the A4 a more driver-centric car? Unfortunately, they haven’t. Yes, the performance is a big leap ahead of the previous one, but the character is still that of a relaxed luxury cruiser.

And that’s completely fine. It has always eluded me as to why we expect certain cars to do what they were never meant to do. The A4 is meant to be driven around the urban confines and on that occasional outstation trip. The problem earlier was the lacklustre engine, but that is water under the bridge now. This new engine is just fantastic. We have loved it on the Q2 and the Superb and claim stands strong with the A4 as well. The punch, the grunt and the surge in acceleration are certainly a lot better and should you push it, the exhaust too gets nice and raspy near the top-end of the rev-range. Handling characteristics though remain more or less the same. The A4 was never known to be a great handler and again, why do we expect that? Yes, the BMW 3 series in the 330i spec is excellent to drive, but with the updated engine, the A4 has made up a lot of ground. The steering too feels fluid and consistent and although it isn't bustling with feedback, it is absolutely fine. Which EPS system has real feedback anyway? Where the A4 continues to impress, is the ride quality. The previous version was lauded for its excellent suspension, and this one carries forward the baton in a similar fashion.

The ride is supple and comfy and is tuned perfectly for our battered road conditions. Rear seat occupants will have little to complain about the suspension. Space though isn’t the best, and while the seats are comfy and well-cushioned, the backrest is a tad upright. Still, occupants over six feet should have no problems.

In conclusion then, the updates to the A4 have come in at the right time. The BMW 3 series LWB will be out soon, and the Volvo S60 too is set for launch around the same time. Now, both these cars will bring with them some serious artillery, and the A4 sure has a mountain to climb. But, if you want a plush, luxurious sedan in which you can split your time between the front and the back seat, the A4 is a very strong contender. The high-quality cabin, plush ride and now a more punchy engine all combine to make it a no-brainer. But for how long? Is the real question.