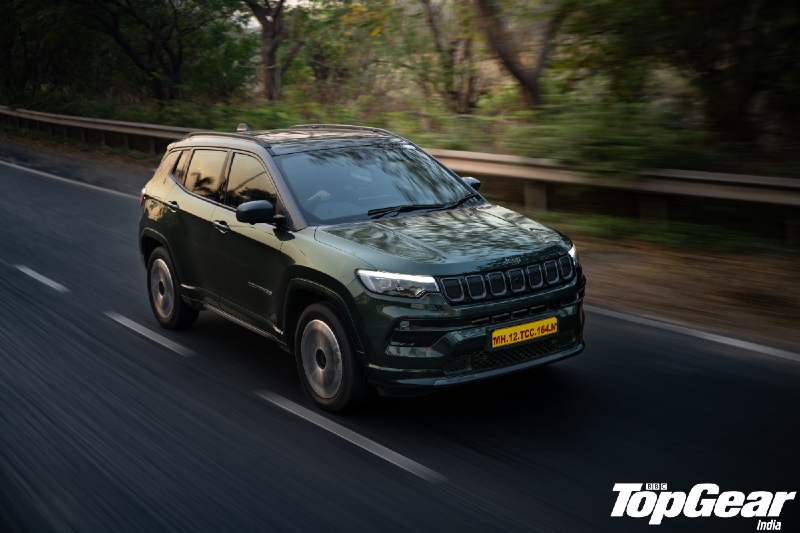 Many ignorant folks used to think that Jeep is a category like Xerox, with statements like “let's buy a Jeep” encompassing all the Mahindra SUVs and Maruti Gypsies of the time. When FCA came to India and launched the made in India Jeep Compass, that's when they learned that Jeep is in fact an iconic American car manufacturer and thus, Compass became a roaring success. As a product, it had everything: looks, engine transmissions, price, and was perfectly packaged and it got a standing ovation in its initial days.

The compass is now in its midlife crisis and needed a botox shot in its arms to appeal to the senses of the Indian buyer. The facelift compass 2021 is that exact shot. Now, with this facelift, Jeep wants to claim the lost territory which still has Creta, Seltos, Tucson, Skoda Karoq, MG Hector, Tiguan all of them holding their placards. If you walk into a Jeep showroom and for some reason have not experienced the earlier Compass, the new facelift compass will charm you and definitely make it to your list.

The 2021 Jeep Compass fills the gap between the Jeep Renegade in the extra-small SUV class and the Jeep Cherokee in the small SUV class. Design-wise, this is one of the most attractive Jeep designs; it has the company's signature seven-slot grille, trapezoidal wheel arches, and hardware to handle off-road terrain easily. It gets redesigned visual features on the outside and continues to preserve the design language. The front silhouette looks refreshing with sleeker LED headlamps, a restyled front shield, a new honeycomb grille, and an assemblage of new LED DRLs.

Few details on the exterior have been squeezed to make the SUV younger and more modern. It also highlights newly designed air inlets, redesigned fog lamp housing, and outlined alloy wheels. However, there have been no significant updates to the side or rear of the SUV. In general, Compass identifies itself from the pack with easy-to-use technology features, a roomy back seat, and better-than-average off-road experiences. The new 18-inch alloy wheels are the only new element when looked at from the side, while the rear seems to have been left untouched. The enhanced styling makes the 2021 Jeep Compass Facelift even more impressive and gives it a striking presence on the road.

The 2021 Compass facelift gets a fully renovated interior, and the SUV now features a dual-tone theme inside with a new floating 10.1-inch touchscreen holding the centre stage. The interior of the Compass appears more modern, quite spacious, and open. The new dashboard design, with its accented mid bolster, grabs all the attention and makes the interior visually more beautiful.

All the major segments, ranging from the redesigned steering wheel with the Jeep brand badge, infotainment system, and HVAC controls to the AC vents and switchgear, have been modified. The choice of elements, fluted patterns, and distinct lines add to the elegance of the cabin. The SUV is now more comfortable, functional, and has enough space for four adult passengers; ok, even five.

The infotainment unit features FCA’s latest Uconnect 5 system, connected car technology, a fully digital instrument cluster, front ventilated seats, leather upholstery, 18-inch alloy wheels, and a 360-degree parking camera. The facelift also has double-stitched brownish leather enclosures on the dashboard and whisked aluminium-like trim. A major addition to the cabin is the addition of an auto-hold function, which is a blessing in India’s traffic conditions. It keeps the braking force applied to dodge the car from accidentally rolling back while driving on a hilly road. Right behind the new steering wheel sits a 10.2-inch instrument cluster.

The SUV now offers more creature comforts like wireless charging, ventilated front seats along with retained features like a panoramic sunroof, cruise control, dual-zone climate control, and six airbags. Passengers can get in and out with ease, thanks to the wide doors with squared-off tops. It also has a spacious cabin with plenty of head and legroom in the front and back. Another notable addition is the button operated power-lift gate, which adds more ease to the user.

It has enough luggage space for small trips, but in-cabin storage space is somewhat lacking. Still, you’ll find multiple storage areas throughout the cabin that are perfect for small items. The armrest bin can hold large phones or a small camera, and the glovebox is decently sized.

There is a small screen which has made its way instead of the earlier knob to show the modes of driving.

The 2021 Jeep Compass facelift is offered with the choice between a 1.4-litre petrol engine producing 157bhp and 250Nm and a 2.0-litre four-cylinder turbocharged diesel thrusting out 168bhp and 350Nm. The four-cylinder engine that powers every Compass does its job. The former comes with a six-speed manual and seven-speed DCT unit, while the latter has a nine-speed automatic transmission, but is slow to execute shifts.

An automatic framework allows the car to direct torque to the wheels as it sees fit, while Snow, Sand, and Mud modes allot different amounts of wheel slip for enhanced friction. Compass facelift diesel will also be available with a four-wheel-drive system. I was driving a 2-litre automatic diesel and probably that's the one to go for.

In a space which is the perhaps the hottest segment, the facelift to the Compass is the vaccine that Jeep needed to not get “obliterated” from the attention span, till it launches its other freshly brewed SUVs. If you are in the market looking for an SUV that lends some character to your name then this facelift 2021 Compass won’t be a regrettable decision.