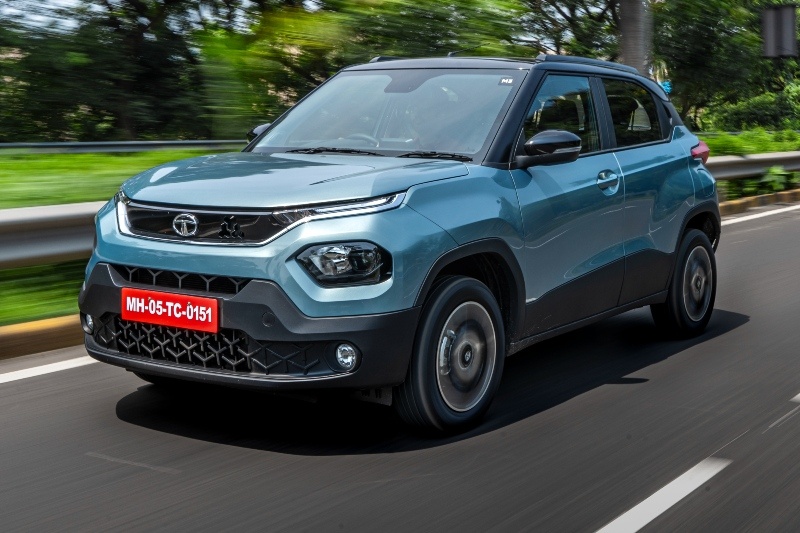 Since the images and videos about the Tata Punch have surfaced on the web, there has been only one question that has everyone baffled-Is it a proper SUV? One look at the Punch and you’d be able to point out the obvious changes right away. The front-end is butch and angular, and the stance is that of a proper SUV. Look closer, and you will also spot the low-placed headlamp with the DRL on top which seems to be the Tata theme now. The bonnet is high up and that is what primarily helps with the boxy SUV look. Over to the side, you get 16-inch alloys on the top trim that give it a proportionate look and a high 187mm ground clearance. What is nice though, is that there is plenty of cladding to give it that rugged look expected of an SUV.

Dimensionally, the Punch is wider and taller than the Maruti Swift, and it is an SUV that reveals its size better in the flesh. The raked A-pillar further adds to the stance, and the rear, again, is quite similar to the front wherein there isn’t a lot happening, but its is modern and contemporary. The taillamps sure stand out with intricate details and you also get a glimpse of an extensive features list thanks to a rear wiper/washer. So aesthetically, the Punch does work well. It definitely has that eye-grabbing design and it will please most of the crowd.

The interior carries over the same thought process as its Tata cousins. The dashboard layout is familiar to other Tata models but there are plenty of spruced up bits that set it apart. The AC vents, switchgear and the build overall seem to be stellar and there is no sign of cheap materials or cost-cutting. Speaking of the seats, the driving position can be varied to be either high-set like an SUV or low set like a hatchback. Either way, the support and cushioning is just perfect so long drives won’t be an issue. What is a miss is a drivers armrest. A minor niggle in an otherwise solid cabin. What does help that much are the doors that open 90-degrees and have a reassuring thud that we all love.

Roominess is the cabin is another aspect of the Punch that will be appreciated. There is a good sense of space and despite the lack of sunroof you never feel cramped. In terms of kit, you get a semi-digital instrument cluster, 7.0-inch HARMAN infotainment system, 6-speakers, cruise control, automatic wipers, automatic headlamps, and of course the iRA connectivity. At the back, you get a flat floor and again, plenty of space.  The headroom and legroom are more than plenty for three passengers. The bootspace is yet again plenty for a weekender with two medium-sized suitcases.

Now all said and done, the Punch is for those that prefer to be behind the steering wheel. Driving dynamics are much like an SUV, The 1.2-litre petrol engine with 87bhp is plenty for a car this size is quite zippy to be fair. Also, as you start up, the refinement is what will surprise you. Tata has made considerable improvements on the petrol engine where it is now as smooth and quiet as some of its peers. Get going and you won’t be disappointed either. The power delivery might lack the punch (pun intended) that you get from its rivals, but by no means does it feel underpowered or lacklustre. There is a steady surge throughout the rev-range, and a lot of it has to do with the 5-speed manual gearbox. The gearing along with the engine mapping allows for a gain in speed through the power band. Speaking of the gearbox, the manual shifter is well positioned and the gates too are well defined. That means slotting gears isn’t rubbery or notchy like the Tata’s of the yesteryears.

The Punch also comes with the option of an AMT gearbox, which truth be told, is a vast improvement from the earlier AMTs from the Tata stable. The shifts are relatively quick, the reaction time is less and you also get a good crawl function that works well in traffic and during uphill climbs. Still, you will have to adopt a relaxed driving style with the AMT. It just does not like to be rushed. What is a highlight on the AMT version of the ‘Traction Pro’ mode which helps in the case of the front wheel slipping. If you are stuck in a rut, it will detect that and prompt you on the infotainment screen to engage traction pro mode. Once the permission is granted, it will brake the wheel that has less traction thereby aiding the one with the better traction and getting you out. Both the manual and AMT versions also get drive modes between City and Eco and while the City mode is the one to be in default, Eco will surely save you some of that precious fuel. Handling might not be the Punch’s forte, but it is decent. The steering is light and breezy at low speeds but also gains heft as you gain speed. There is a good amount of consistency to it, but on an SUV and stance like this, body roll is inevitable. Still, not a big enough flaw considering the audience and the fitness for purpose. The ride quality though is superb. It is flat and composed on the highways as it pitches and wallows a lot less. But it is hugely comfy on bad roads. A typical Tata trait and aren’t we glad that it’s there. At low speeds, it takes on broken patches with ease, and as you gain speed, it flattens the car out. The brakes too are impressive as the bite and pedal feel is excellent and the strong stopping power gives you tremendous confidence while braking.

The Punch hasn’t been launched yet, but if we had to estimate a price, it would be between the Rs 5.99 lakh to Rs 8.99 lakh bracket. Mind you, the Punch will also be going against its own with the Tiago, Tigor, Altroz and even Nexon. Sure, you will get a better-equipped version for the same price of a mid-spec Altroz or Nexon, but that is a call you will have to make. As far as first impressions are concerned, the Punch surely has the power to make a dent in the segment and give the cars under Rs 10 lakh a good run for their money.