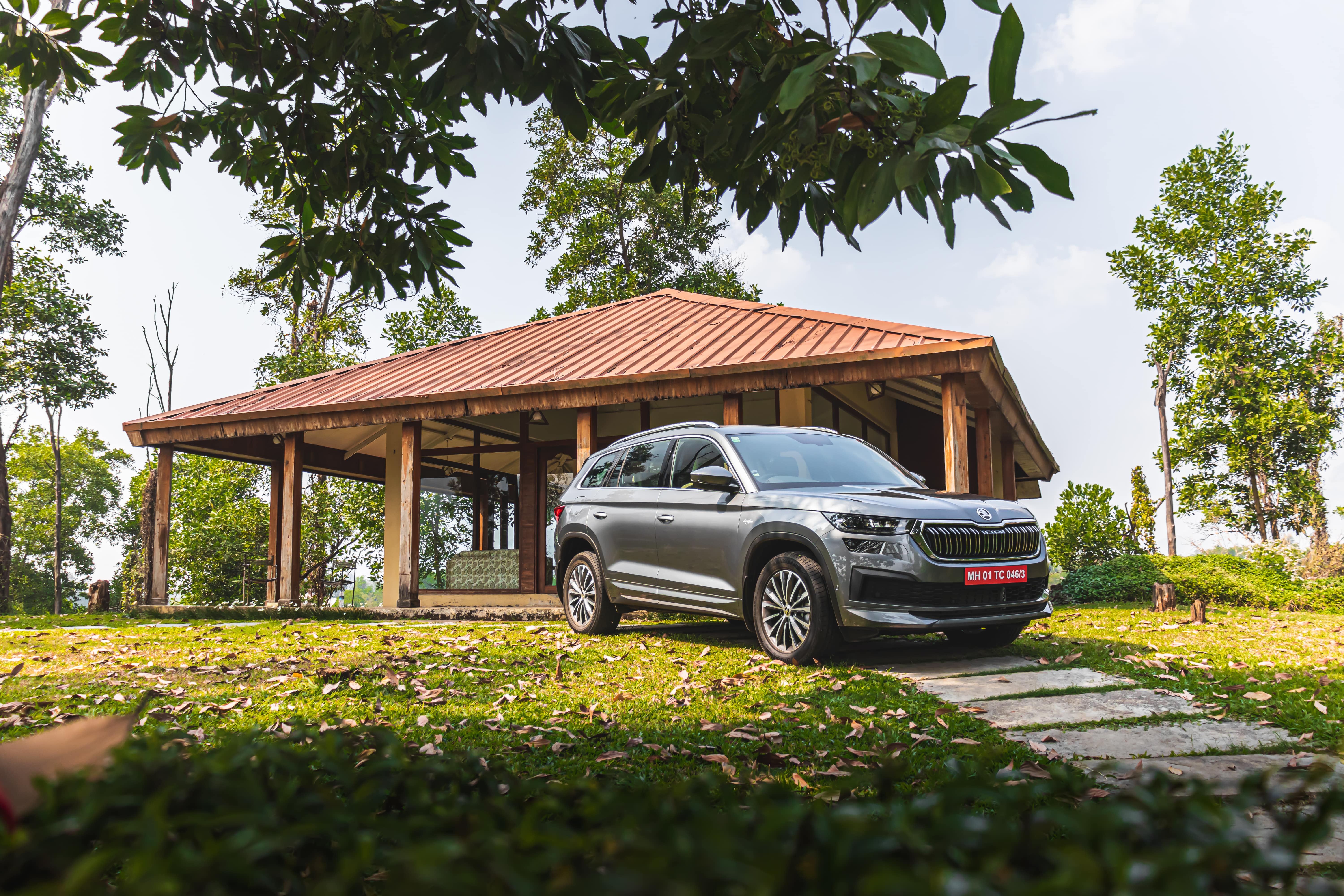 Exploration begins at home. Or rather, the driveway. At least, that's what the press release of the new Skoda Kodiaq suggests. Ever since the Skoda Kodiaq left the Indian market in its diesel guise. It left a void that no other ladder frame SUV could fill. Sure, its own sibling did try to claim the throne, but as sporty as the Volkswagen Tiguan Allspace was, it still lacked the extra layer of practicality and the simply clever thinking the Skoda Kodiaq bought to the fold. Well, the Skoda Kodiaq is back in India and, this time, in a much harder-hitting avatar. We spent some time with it to find out what's new, old and missing on the Skoda Kodiaq.

Despite being named after an apex predator, the Skoda Kodiaq seems rather warm and welcoming, kinda like a cuddly bear. I suppose that is no bad thing for a luxury car, especially one that plans to prey on competitors segments beyond its own. To make this SUV a little more brawny and appealing, Skoda has resculpted the front facia by making the front appear a little more upright, with inclusions like a taller bonnet, sleeker headlamp and fog lamp housing. Unlike the globally available model, the Indian spec Kodiaq in its top-spec L&K trim misses out on the matrix LED headlamps.

Instead, we get Skoda's crystalline led headlights with illuminated "eyelashes". These adaptive LED's do a reasonably good job, but they do seem a little lacking when it comes to overall beam intensity. Before the Skoda Kodiaq arrived, I was driving a BMW X1, and in comparison to its headlights, I must admit the Kodiaq does leave you wanting slightly better illumination. However, I doubt most buyers would ever really notice, and these headlights would be a significant upgrade to most buyers moving up segments to get this car.

Unlike this chromed up L&K trim, the mid-spec Kodiaq SportLine trim gets a blacked-out front grille and manages to get rid of most of the chrome in exchange for an all-black treatment. Apart from that, a different 18-inch wheel design, both the cars are pretty much the same outside. Unlike the global design, the Indian spec model does not have the aero design wheel available for any trims, though personally, they are not for me; for anyone that is into them, I guess that is a bummer for you.

Walk to the side of this SUV, and it is chiselled with these aggressive shoulder lines, but I've got to be honest, this looks very similar to its pre-facelift Kodiaq. Now head over to the back, and you will notice that the C shaped tail lights are still here, just with a slightly edgier design and housing a set of dynamic turn indicators that, weirdly enough, are not available in the front. Overall, most people tend to find the Kodiaq a little odd as it appears less like an SUV and more like a jacked-up station wagon, but I love the station wagon looks and think this SUV is rather handsome especially in this Graphite Grey finish.

Step inside the Kodiaq, and you get a beige bear hug of comfort. Though the beige is not up to my taste and seems a little unimaginative, it does its job of making the cabin appear roomier than it already is. Ingress and egress are relatively straightforward, given that the unladen ground clearance is just 192 mm, while the laden ground clearance is even lower, 140 mm. Another cool feature is that the proximity sensor for the key is present in all four doors, which further enhances accessibility.

The L&K variant here gets heated and cooled seats in the front, but I couldn't even tell if this feature was working for some odd reason. I suspect this to be a mere isolated incident with our test car. Nevertheless, it still misses out on the massage function available with the global model; not only would it have been a game-changer for Skoda, but it would also have really helped sock it to the SUVs above. Well, I suppose we've got something to look forward to in the future.

The leather seats are 12 way adjustable, though I found them relatively stiff. I, for one, don't mind such a setup over longer journies as they end up feeling less tiring. I presume most buyers would prefer a softer setup, at least in the middle row, but more on that later.

I like the new steering design for Skoda cars, and this two spoke wheel feels relatively easy to use, and even the buttons are pretty minimal. Now some people may prefer the convenience of more controls on the steering whilst I like a clutterless wheel. To further add to comfort, this steering is also adjustable for both reach and rake, so it's pretty straightforward to find a driving position that's comfortable for you.

Now, unlike the two spoke design steering wheel we have over here, the sportline variant gets a 3 spoke flat-bottom steering wheel to suit its sporty nature. Most of the buttons around the cabin are of typical Skoda design and quality and feel quite nice to touch while remaining familiar to anyone that has previously owned Volkswagen group cars.

Step into the backseat, and the Kodiaq doesn't disappoint, for the most part. Space on offer is ample, and passengers can even adjust the middle row seats for legroom and recline. Additionally, Skoda has provided some simply clever bits like door-mounted sunblinds, a cosy little blanket and braces for your neck in case you doze off while being chauffered. Now space isn't the problem in this backseat; Infact, it's the lack of under-thigh support and the relatively stiff support from these seats, which may or may not be appreciated by most buyers.

It's when you step into the third row that you realise this SUV isn't much of a seven-seater but rather a five-plus-two seater at best. I'm six feet tall, and I was sitting with my knee caps at the same height as my chest. Obviously, it wasn't designed for adults, but I'm not sure even a tall child would be comfortable here.

This car gets many safety features ranging from ABS, ESC, MKB, EDS, TPMS and ASR, it sounds like a mouthful, but fear not, all these acronyms are here to protect you. Additionally, you get nine airbags as standard across the entire Kodiaq range, while the 360-degree camera system is only available on this top-spec L&K trim.

Storage capacity on offer with all seats up is a mere 270 litres but fold the 6th and 7th seat down to recruit up to 630 litres of boot space. If that much space ain't enough, you can get yourself a galactic 2005 litres of total boot capacity. I like that Skoda has provided dedicated storage space for the boot cover, and it stays nicely tucked away near the spare wheel.

The Skoda Kodiaq gets a 2.0 turbocharged petrol engine that has already made its debut on the Skoda Superb and the Volkswagen Tiguan Allspace. This motor churns out a mighty 190 bhp of power and a good 320 Nm of torque and give this SUV quite the punch as it flies down the road. I quite like this engine and gearbox combination, and the two work pretty well in tandem to deliver a rather relaxing or thrilling experience as you demand it. There can be a slight delay in kick down from time to time, but it's negligible for a family SUV.

Fuel efficiency is reasonable for an SUV of this size and calibre, I for one, saw the figures go as high as 14 km/pl at best and drop down to 8 km/pl at lowest. The Kodiaq comes with six different driving modes, and they vary from Eco to Sport; there is even a snow mode thrown in there just in case you ever find yourself in Himachal Pradesh during peak winter.

A worthy mention is an enticing sound this engine makes while hard acceleration, and it's a beautiful way to break the silence in this cabin. However, I suspect Skoda is playing an exhaust note through the speakers, which doesn't bother me as much, but I'm sorry to inform you if this happens to be a deal-breaker.

Braking on the Kodiaq is pretty confidence-inspiring, with the pedal being progressive yet communicative. I found that the Kodiaq would lose momentum from triple-digit speeds under hard braking to double-digit ones without a fuss whilst maintaining good body composure. Overall, I'm pretty happy with the overall braking feedback, and you can be rest assured this car will come to a quick halt whenever you demand it.

Now, you would imagine that the DCC (Dynamic Chassis Control) would be something you'd find on the Sportline trim; instead, it's available exclusively for this L&K trim. On the road, it's tough to tell the difference in ride quality when you swap between driving modes. The differences are more dusk and dawn than night and day, and I highly doubt most owners are ever going to be able to tell the difference unless they're really really looking for it.

With that being said, overall ride quality is actually quite good, and the Kodiaq has a knack for remaining composed through most twisties and corners. You may hear the occasional thud going over some expansion joints or sharp bumps, but the Kodiaq remains relatively comfortable for the most part.

Launched at a starting price of Rs. 35 lakh (ex-showroom India) and going up all the way to Rs. 37.50 lakh (ex-showroom India) for the L&K trim. At this price point, I'd say the Skoda Kodiaq is quite a value proposition considering the amount of comfort and convenience it brings to the table. Sure it may have minor gripes, but I hardly doubt any of them would end up being deal-breakers in hindsight.

It drives like a predator that knows how to hit the apex. Plus, it certainly holds its own in terms of comfort and practicality. I can only imagine what big waves the Kodiaq RS will create if it ever makes its way to India. That being said, for 2022, the Skoda Kodaiq is quite a worthy package, and I would recommend taking a test drive if you're in the market for an entry-level luxury SUV.