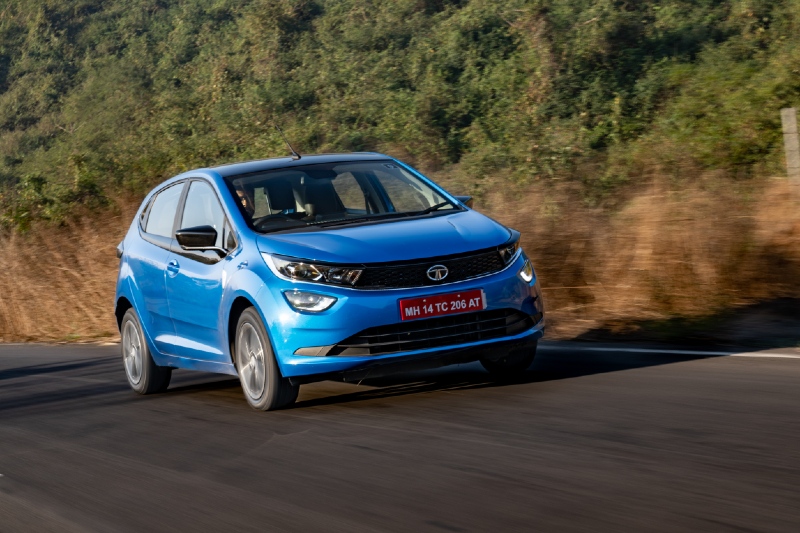 Not too long after it’s launch and success, Tata has updated the Altroz and tried to fix what was arguably the biggest flaw. The petrol engine, or rather the fact that it just wasn’t exciting enough for those who love to drive. The power was just about enough and the driving dynamics weren’t worthy of bragging either. So, in comes the i-Turbo. A more powerful engine, some minor tweaks and a lovely shade of Blue added to the options.

The Harbour Blue (as we have also seen on the upcoming Safari) is Tata’s latest paint shade and one that surely does stand out from the crowd. It is deeper than the ‘Tectonic Blue’ you have on the Tiago and goes very well on the Altroz. Apart from that you now have ‘i-Turbo’ badging on the rear and those are the only clues you have to spot the I-Turbo from the standard car. And is that a bad thing? No. Because the Altroz was always a looker, and as is the case with most manufacturers, Tata too went the, “if it ain’t broke, don’t fix it” way.

So you still get the modern styling with all those striking elements and the same is carried forward on the inside. Step in and those wide opening doors are hilariously cool. Once you are seated, connoisseurs will notice the subtle and minor updates. The seats now get leatherette treatment along with a tri-arrow design. They feel premium and are as comfy as always. Then you have the 7.0-inch infotainment system, which might not be the biggest, but blends into the car and works well. Sure, the screen resolution could have been better, but it is responsive and easy to use. A keen eye will also notice the additions of tweeters in the front tuned by HARMAN, which add to the audio experience. The infotainment now also has voice-command features and supports, Hindi, English and Hinglish as well.

Glance down and you will also notice the “Xpress Cool” feature on offer. Quite the boon to have on a hot sunny day. Then you have the IRA which is Tata’s jargon for connected tech. It comes loaded with 27 features like geofencing, collision alerts, car lock/unlock and many more.

It is quite intuitive and user friendly and you won’t need a degree in hacking to work your way around it. What you will also notice is a button tucked away in isolation with a sprinter marked on it. That is the newly added Sport mode.

Get going in the i-Turbo and you notice a jump in refinement from the standard petrol engine. The 1.2-litre 108bhp engine doesn’t feel strained of coarse even as you build up the revs. What you do notice though is the linear power delivery. There is none of that sudden surge usually associated with turbocharged engines. The power comes in gradually, but that is not to be mistaken as relaxed. You have plenty of grunt on offer and the five-speed manual gearbox compliments the engine well. Now, in this day and age, a five-speed is almost archaic, but the gearing on the i-Turbo has been tuned well.

Thanks to that, you always find yourself with enough grunt to make a pass without having to shuffle too much through the gears. On the highway, the engine hovers around 2500rpm at about 100kph, and if that sounds high, the refinement like mentioned above is excellent. Only when you push it hard does it retaliate with a coarse note. However, the sports mode is the equivalent of the engine chugging an espresso shot. The engine becomes livelier and the overall response is excellent thanks to a change in the engine mapping. My suggestion would be to press it at the time of delivery and never touch it again. With a car like this, you always need that extra grunt and response.

Now, Tata hasn’t just plonked a more powerful engine and left it there. There have been some minor revisions and tweaks as well. The suspension has been re-tuned and has a hint of firmness. That said, it is still on the softer side and bump absorption is the best in its segment. The steering too has been looked at and is now well-weighted. You get a good amount of heft as the speed increases and it is consistent as well.

But does all this mean that the Altroz i-Turbo is a hot-hatch? No, it does not. Does it have more power? Yes. Does it drive better? Definitely. But, it still is far from that fabled ‘hot-hatch’ tag. These changes have surely made the Altroz better and those who like to drive will certainly appreciate it. However, don’t make the mistake of expecting too much. That’s what happened with the Tiago JTP and thanks to the expectations, we lost what was a fun-to-drive and zippy little car. The Altroz is not chasing Golf GTI status but is giving owners a better driving experience. This was what the Altroz should have always been. Better late than never.