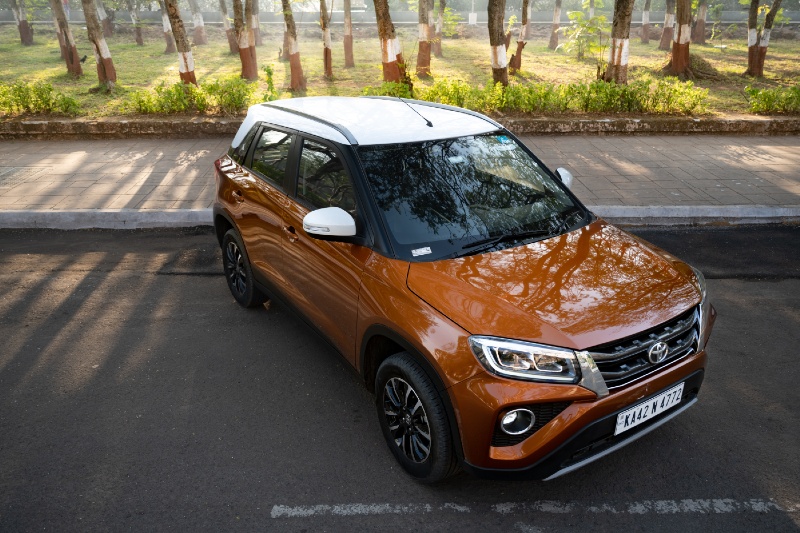 Toyota is a brand that has made its bones by manufacturing some of the best SUVs in the world. The Land Cruiser, the Prado, the Fortuner have all attained an almost mythical status and have an ardent following. I personally too am a huge fan of the ‘Cruiser’ suffix so when Toyota announced the Urban Cruiser, it was rather disappointing to see a Vitara Brezza in different clothing. But, it was a move that was in the pipelines for ages and since the success of the Baleno-Glanza venture, it only made sense for Toyota. You see, Toyota somehow can’t seem to crack the mass-market segment, and it has tried to on a number of occasions. The Etios, Liva, Yaris are all proofs that in India, if you want a Toyota, go big or go home. The Urban Cruiser then seeks to change that perception.

It is based on the Vitara Brezza and when I say based, I mean it is the exact same car right down to the key fob. The changes are purely cosmetic which means you have a redesigned front-end featuring the Toyota grille and angular bumpers. The wheels too are identical and a profile view will stump the purest automotive connoisseur. At the rear, you have ‘Urban Cruiser’ mentioned on the chrome panel and redesigned bumpers as well. Now, if you think the exterior is similar to the Brezza, wait till you step inside this one. Cover the logo on the steering wheel, and even the engineers who made it won’t be able to tell them apart.

Through a magnifying glass you will notice that the seats have a new shade along with the door pads. The rest, however, is the same. Space is good, the cabin is airy and has that typical SUV feel and the visibility is excellent thanks to a commanding driving position. You also have the same equipment list as you get on the higher-spec Vitara Brezzas. That has allowed the Urban Cruiser to have some decent lost to boast about with LED headlamps, 7.0-inch touchscreen infotainment system that also has the SmartPlay interface. However, the quality is still much behind its rivals. The plastics and fit-finish too isn’t anywhere close to Toyota standards. At the back, it is the same story with no change in comparison to the Vitara Brezza, which means space is good, but there is little to entertain you.

The engine too is the same. The 1.5-litre petrol engine with 103bhp is smooth and refined and because its naturally aspirated, it is quite zippy from the start. Sure, it doesn’t have the surge and grunt of the diesel, but there is plenty for everyday driving. Mated to it is a 4-speed automatic gearbox. There is also a 5-speed manual on offer. However, the test car was an auto (phew!). Now, a 4-speed might seem like a thing of the last decade, but it works surprisingly well. You are never left wanting for more in the city, and it is only when you venture out on the highway at triple digit speeds that you miss having an extra gear or two. It also is a ‘SmartHybrid’ which means auto start/stop at traffic lights and that helps save some precious fuel. So all in all, the Urban Cruiser rests on the laurels of the Vitara Brezza and has made itself as a viable option.

What customers would appreciate more though, is the extra warranty. Compared to the Brezza’s 2 year/40,000km you get a 3 year/1,00,000km warranty on the Urban Cruiser. Sure, it is also Rs 5,000-15,000 more than the Brezza, but it also gets you the extra warranty and the reliability and reassurance of the Toyota badge. The Urban Cruiser then is probably a good starting point while you’re on your way to the Land Cruiser. Quick Stats: Price: Rs 8.40-11.30 lakh (ex-showroom, Delhi) Engine: 1.5-litre, petrol Power: 103bhp at 6000rpm Torque: 138Nm at 4400rpm Gearbox: 4-speed automatic