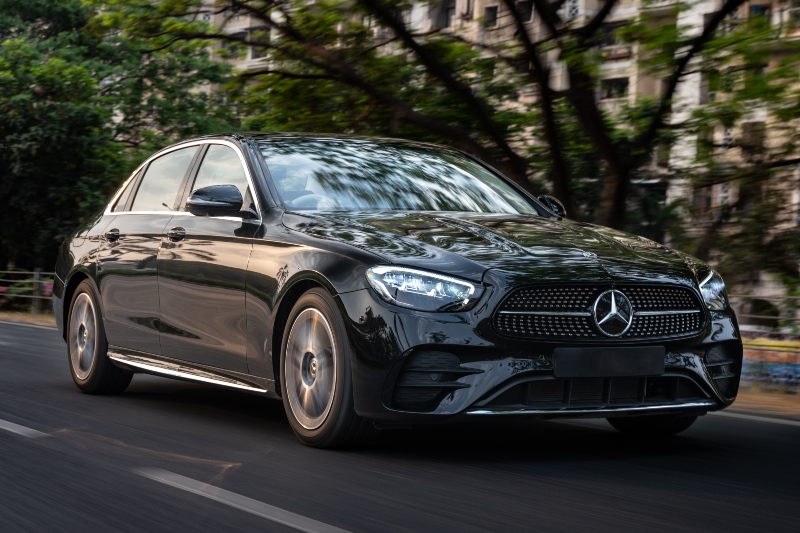 Mercedes’ idea of introducing the E-Class in long-wheelbase guise was undoubtedly a masterstroke. It screamed value, and suddenly, you now had a car that was almost the size of an S-Class but at almost half the price. Customers flocked the showrooms, and it was all hunky-dory. However, that was almost five years ago, and with competition stepping up the game, the E-Class was getting rather long in the tooth. So, following the age-old proverb - a stitch in time saves nine - Mercedes has updated the E-Class for 2021 and is looking to, once again, reign the segment. So, what has been updated? Let’s start with the design. The highlight with this update is the trim on offer. The E-Class is now available with an AMG-line which is the reason for the aggressive front end with sharper bumpers and those studded elements in the trapezoidal grille along worth the power lines on the bonnet. The LED headlamps, too are now changed and follow Mercs latest design theme. Now, although you do miss out on the dual-light nature that made the E class recognizable, the new DRLs are in line with the modern Mercs and look quite posh.

Over to the side, and you will see 18-inch twin 5 spoke alloys again very typical of AMGs and the same lengthy limo-like silhouette. The dimensions haven't changed, so the massive three-meter plus wheelbase remains. And at the rear is where the update is most prominent, thanks to the bigger LED taillamps. All in all, they are subtle changes, but ones that surely stand out and help the E class get a fresh image.

But, that’s not all, the interior too has gotten a few tweaks. No big change here as it is typical of Mercedes to use the ‘If it ain’t broke, don’t fix it’ strategy. However, what jumps out at you is the new steering wheel. Gone are those trackpads and in place are similar haptic touch switches that are just as delicate to the touch as before. You also get a fresh interior with a blend of cream and blue leather that oozes opulence. Combine that with the open-pore ashwood, brushed aluminium and piano black panels and you have a regal interior worthy of the price. The features too are carried over from before with the latest MBUX system for the infotainment and you now get a fully digital instrument cluster as well.

In the rear seat of the updated E, you will be mesmerized by the room on offer, but again, the only new bit here is the tablet mounted in the center armrest. Similar to what you might have seen on the GLS, you can use this portable tablet to control your infotainment and MBUX and also use it as an Android tablet to check emails etc. Quite a handy tool to have. So the E-Class then ought to have been finished. What more could it possibly have? Well, it does have one more change. And it is a big one right under the bonnet.

With this update, the E-Class also gets the ‘350d’ badge. Yes, that means a 3.0-litre diesel engine option is back, but it’s not the one you would imagine. Replacing the V6 is an in-line six turbo-diesel engine that makes 282bhp and 600Nm. It is slightly more powerful but is still just as refined. In fact, the NVH levels are well contained and it is only if you push it too hard that you hear the coarse diesel drone inside the cabin.

Performance too has improved by a shade with a 0-100kph time of just 6.1 secs. Commendable for a car its size. Then there is the 9-speed automatic gearbox that is smooth and seamless. Not fast like a DCT, but in line with the character of the car. However, the back seat is still the favourite place in the E-Class. It is only in here that you will appreciate the 350d badge more as the air suspension shines through when you are relaxing with the sunblinds up and the backrest reclined. The ride quality on the E-Class is sublime to say the least, and you’d never want to get out of it. But that said, you can also opt for the lower variants with the smaller engines that give you almost everything that is great about the E-Class. Because with the 350d priced at Rs 80.9 lakh, you are looking at a significant chunk and when you consider the 220d (Rs 64.80 lakh) or even the 200 (Rs 63.60 lakh), and that is a lot of money saved. But, if you are the sort that loves to take the wheel from time to time, or if you are close to your chauffeur, the 350d is almost flawless. The updated E-Class then is still your best bet for a luxurious, feature-rich sedan. So yes, the S-Class better worry.

For - Premium cabin, refinement, ride comfort Against - Not the most fun to drive.

To see how the Mercedes-Benz E-Class fared against the BMW 6 Series GT, click here.