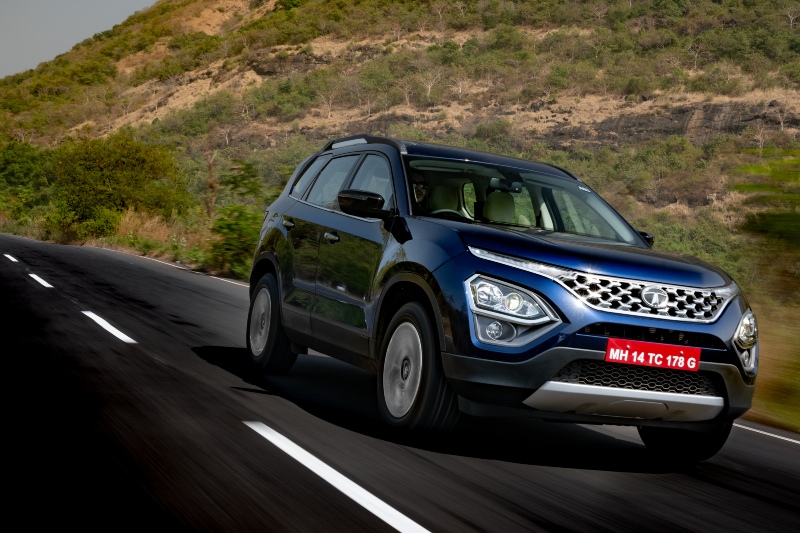 Twenty-two years after its debut, Tata brings back one of their most respected SUV names in the Indian automotive industry; the Safari. But this time it has a totally different interpretation. The Safari which once explored places with prestige has now become a FWD SUV with bright upholstery that would make you question not once but twice - can this really #reclaimyourlife?

Had this been the first-drive review of the Gravitas, I would have probably opened with how well-thought the product is. But days before the launch Tata decided to slap on the Safari sticker and with that came many responsibilities. Duties to pay homage to the OG legend. Delivering a product that could surpass people’s expectations. It’s a whole new equation and it’s majorly down to one small thing – the name on the tailgate. Talk about performance pressure!

But wait, let’s dig a bit deeper. The indigenous version, although came packed with off-road tech, was originally designed to be a road-friendly SUV that could transfer people in comfort. It had a great formula but Tata Motors stretched it excessively, attempting to sell it till 2019. Sure, the SUV did receive one major overhaul but it still retained the silhouette of the original. And features inside were – what’s the word – agrarian. Towards the end of its life cycle, it just wouldn’t sell because it lacked what new-gen customers were looking for.

And that’s where this new one picks up. It’s loaded with tech, wears some sharp lines with generous dose of chrome, gets comfortable seating for the third row and new interiors that make feel rich and opulent. The face is identical to the Harrier minus the grille, and the wheelbase remains the same too. It’s only after the B-pillar that the changes to the exteriors are prominent. The length has gone up by 63mm to accommodate the third row, the wheels are now upped to 18-inches and the roof now gets a step, very similar to the OG Safari’s, and there are functional roof-rails on offer too.

It doesn’t look like a half-hearted job, the integration of the added height of 80mm and the flat-tailgate is executed rather well. There is good glass area on offer, the tail isn’t oddly upright and the gate itself – with the chrome additions and spilt tail lamps that features twin-LED inserts to differentiate from the Harrier, looks neatly done.

On the inside, the differences are plenty and evident even as you begin to peek. That’s largely down to the Oyster white upholstery on use – it makes the cabin very upmarket, and also boils down to the overall execution with minimal and consistent panel gaps. The dashboard wears a nice trim finished in Ashwood, the 8.8-inch floating infotainment system takes center stage and also likeable is the minimalistic and neat design approach. What’s new is the addition of iRA smart suite for connected technology and an e-brake that replaces the aircraft-style lever. For good, of course.

The second and third-row are all-new, which has resulted in a bit of a step up into the cabin. A side-step would have helped, but it’s pleasant once on the inside. You are now offered two seating configurations, a seven-seater that uses a bench seat and a six-seater with captain seats for added comfort. The seats are adequately comfortable however additional under-thigh support would have been appreciated along with integrated rear-blinds. Creature comforts are good, you also get a boss-mode on offer, and the ride remains pliant too.

The third row of seats- yes this is what a lot of you want to know so I’ll answer it straight, they are very much usable. Once you squeeze yourself in, the space on offer is surprisingly good and Tata has thrown in things like dedicated AC vents with blower-control, cupholders, adjustable headrests, all in the interest of passenger comfort. The visibility outside is great, you can thank the large glass-area for that.

If you’re the sorts that values driving dynamics, let's jump from the third row into the driver's seat. A long-list of features is something that many manufacturers can nail, but combining it with good driving dynamics is a piece of art, especially when your vehicle weighs around two tonnes. The Safari has that covered, and that’s largely down to the fact that it uses a Land Rover derived D8 platform (OMEGA ARC) with monocoque construction, making it feel controllable and contained despite the added weight and height. Ride quality is good across the rows, the suspension irons out bumps, undulations, and even major thuds are kept away from passing into the cabin.

With 167bhp and 350Nm on offer the engine feels powerful enough to take on the regular chores, however, the NVH levels could have been better contained. I had a chance to sample both the manual and the automatic transmissions on offer, and while the MT remains fairly acceptable, it’s the AT that you should be opting for. Additionally, there are driving modes to tackle various terrains but they don’t replace the mechanical surefootedness of a 4x4 transfer case. But heck, that’s normal life for most 4x4s anyways, no? And if you are worried about its long-distance touring, fret not, there’s enough ground clearance on offer, the driving modes will be of great assistance, there is good amounts of low-end torque and on the long hours that I spent on gravel roads, the Safari impressed with excellent body control.

So there we have it. Tata putting their best foot forward in their passenger car history. The Safari has now evolved into a more sophisticated and luxurious SUV than the OG, and even comes with the road-presence that commands prestige. As an added benefit is drives and rides extremely well, quite ahead of what the current competition offers. When Tata introduced the Safari back in 1998, the jungles were different. That was tamed to venture out in the wild, this new one is designed to tackle the urban jungle. And trust me, there’s enough wilderness out in the city.