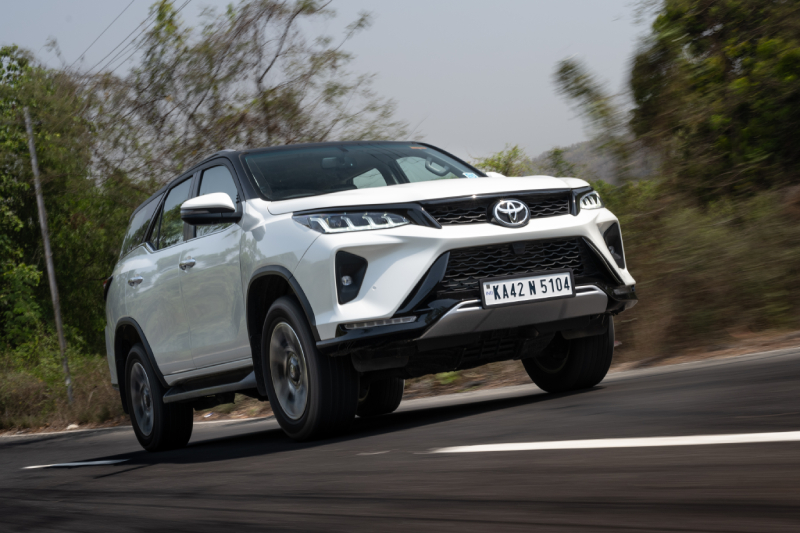 Whenever there's a conversation about a seven-seat, 4x4, all-conquering SUV; Toyota’s Fortuner is likely to come up almost every single time. For those who may not know, the Fortuner is built on the Hilux platform, in fact, it is the Hilux in many international markets. Result - it’s damn good off-roader! It only helps that it comes with Toyota’s fabled reliability factor. But not so long ago, the updated Fortuner arrived on the scene, and there was a bit of surprise.

A Fortuner Legender? What’s that? Is it more capable off-road? Is it more hardcore? But that wasn’t the case, at all. Instead, the Legender came only in 4x2 and is more expensive than the updated Fortuner's corresponding standard version. Again, why? What's the point of bringing out a more expensive version, but that’s less capable than driving off-road is concerned. Shouldn’t it be the other way around? After all, that’s where its legend comes from, at least according to me. But, Toyota has a different approach.

You see, the Legender comes with its own set of little tweaks, to set it apart from the updated Fortuner. Upfront, you’ll notice the heavily redesigned front grille, and those funky looking LED headlamps and DRLs. The indicators sit low on the bumper, on each side, giving off a more premium feel. The 18-inch alloy wheels are specific to the Legender variant, and then around the back, the taillights and other subtle additions make for a slightly more well-rounded look overall. On the inside, the Legender gets ventilated front seats, ambient lighting, dual-tone interiors, a wireless phone charger and a USB port at the back. Mind you, all these changes are with the standard Fortuner. Since this is a Fortuner, we began with a light bit of off-roading. Although this is just a 4x2, it’s pretty fun to tackle light trails, especially with the traction control completely off. The Legender maintains its composure if you’re in the mood to slide about a little bit. But, we were soon out on the smooth tarmac, to see if this version of the Fortuner really deserves that ‘city-biased’ badge. First things first, the updated 2.8-litre, four-cylinder, turbo-diesel motor now produces more power and torque than before, which is a good start. The power delivery too can be felt a lot better from behind the wheel. Especially, when you press down on the ‘Sport’ mode button. Yes, the Fortuner gets three driving modes - Eco, Normal & Sport.

Another area wherein Toyota deserves praise is the ride department. The Legender does ride a lot better than the previous generation model, but there is still that body roll and bobbing in corners and at high speeds, respectively. Given that this is a body-on-frame SUV, handling is not really the Fortuner’s strong suit. However, it does a pretty good job in a straight line; in fact, the Fortuner is capable of doing that all day long, without breaking a sweat. Overall, the Fortuner’s driving experience has improved from before, but things like the 11-inch touchscreen infotainment system, which is new, still feel a little outdated, like the design of the cabin. However, it does feel pretty robust. Since I am a bit of a Toyota fanboy, I love the little Toyota-ish details like the digital clock straight from the 1980s, the coin holder and the gearshift lever. Speaking of which, the six-speed torque converter is a smooth operator, but only if it's not pushed too hard. If you are in the mood to do so, there’s always the paddle shifters or the manual mode.

So, does the Legender make sense over the standard Fortuner? Especially if you consider the fact that the corresponding variant costs almost as much as a Royal Enfield Interceptor 650, which isn’t small money. Who’s the Fortuner Legender for then? Well, to put it simply, it's for the city-dweller who prefers to stick to the highways and likes taking their whole family for the occasional weekend getaway. It’s for the individual that wants their Fortuner to be that extra bit, well, legendary. In all honesty, I’d prefer sticking to the standard Fortuner. But, if you enjoy a little more bling than bang for your buck, the Legender should be the one for you.