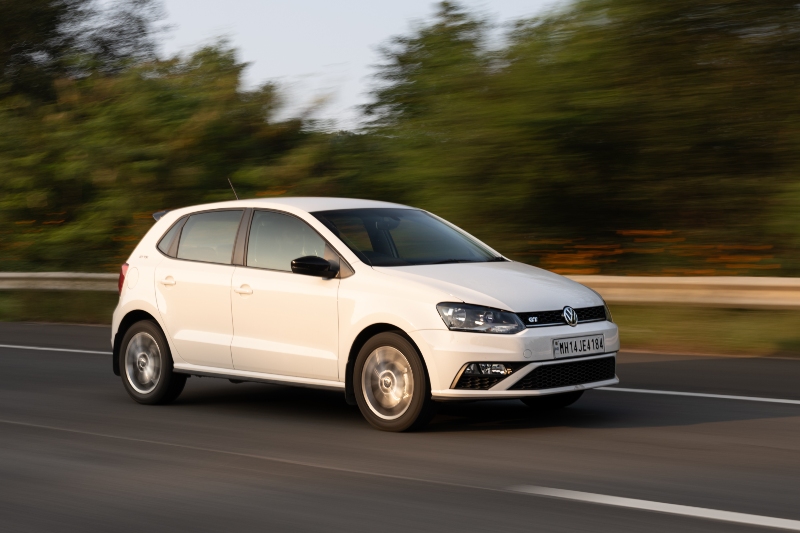 The Polo has been around for quite a while, and needless to say, is starting to show its age. In a time where the features list takes top priority, the Polo is rather underequipped, and you would need a very strong reason to buy one given its competition. However, VW believes that the Polo still has a cult and is banking on the stellar build quality that is just unmatched to this day. We saw the 1.0-litre TSI engine featured in the Polo, Vento and even the Skoda Rapid, but now to add to it is the 6-speed automatic gearbox that we sampled last month on the Vento. Honestly, it is hard to write a whole separate review when very recently you have driven and written about what is essentially the same car with a boot.

However, the GT TSI badge has always been synonymous with good driving dynamics, and that is something I can never say no to. So frivolities aside, let’s get straight to driving. The 1.0-litre turbo-petrol engine is quite fun as we have seen earlier. It is an engine that unlike most small capacity engine likes to be in the top of the powerband and complimenting that now is the 6-speed automatic gearbox. Now it is natural to be hesitant about it because the previous GT TSI, which featured the almost mythical DSG gearbox. So following in its footsteps was always going to be a tall order. However, you’d be pleased to know that even though this traditional automatic gearbox doesn’t have the lightning-fast responses of the DSG, it is still plenty fast.

There is no delay in shifts, going up or down the gears and if you weren’t told, you wouldn’t pass it for a torque converter. It is that good, The shifts are smooth and quick, and even during unplanned overtakes, kickdown times are impressive, to say the least. That said, you will surely miss having paddle shifters as it would have completed the package. Coming to the engine, the 108bhp on tap is enough to hurl the Polo around, and because it does away with that extra boot like the Vento, it is that much more fun to drive.

On a nice winding stretch of road, you sort of forget that it doesn’t have a sunroof or LED headlamps or wireless charging. Things like ventilated seats and an air purifier don’t matter because the steering feel and the overall balance is so good. No wonder VW has gotten away with the lack of features list. The core principles of the Polo are so good, that when you spend a bit of time behind the steering wheel, you sort of convince yourself that you don’t really need any of it. Stil once you are back from your enthusiastic drive, your family will be cross as the rear seat is just not spacious enough.

The interior too is dated now, and even though you get Apple CarPlay on the touchscreen, the rest of it looks and feels like a decade-old car. And it is that to be fair. A decade-old car that you adore once you drive it. Sure the Tata Altroz looks more modern and the Hyundai i20 is going to set the sales charts on fire. But when it comes to bringing a smile on a driving enthusiast, the Polo GT TSI will do the job just fine.