News/ Industry/ The 7-Seater MPV Battle Is No More One-Sided I Has The King Of MPV Lost Its Charm To The Newbies?

The 7-Seater MPV Battle Is No More One-Sided I Has The King Of MPV Lost Its Charm To The Newbies? 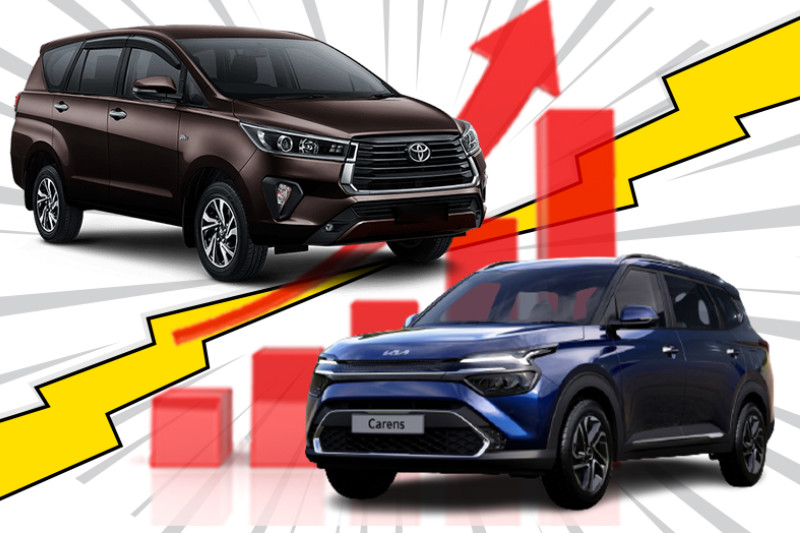 The dynamism of the Indian automobile industry is equitable to a fairy tale story. The crowned king of the segment takes up the hit from a relatively unknown manufacturer in India. Toyota Innova Crysta has been the people’s favourite when it comes to 7-seater MPV. Well, not anymore. Kia has proved with its Carens that India is a price-sensitive market, not value-sensitive.

The 7-seater market has recently taken up the pace lately, and Kia has encashed the opportunity with open hands by introducing a 7-seater Carens, which Kia markets as an RV ( Recreational Vehicle). According to sales reports, Toyota Innova Crysta is no longer the highest-selling MPV in the Indian market for the year 2022 ( until now ) . Kia Carens clocked the sales figure of 30,953 in the past six months. In comparison, Innova has received 30,551 sales in 6 months. Well, the 402 unit difference seems relatively less on paper. However, it impacts the compound profitability of the brand. The legacy of the brand Toyota is ultimately being shouldered on Innova Crysta. On the other hand, Kia has versatile product offerings in its portfolio catering to universal market share.

Toyota Innova Crysta has been the forefront winner in its MPV segment, but with the introduction of the Carens, Toyota has to up its game to keep them relevant. Kia is relatively less expensive than Innova, which has given Carens an edge over Innova.

Toyota offers two engine options with Innova Crysta- a 2.4-litre diesel and 2.7-litre petrol. A diesel mule produces 150 hp and around 360 Nm of torque. On the Other hand, an N-A petrol engine churns out 166hp and 245Nm of torque. Compared with Innova Crysta, Kia Carens has three engine options to choose from. A 1.5-litres N-A petrol engine producing 115hp and 144 Nm of torque. Kia Carens also get a powerful 1.4-litre turbo petrol engine producing 140hp and 242Nm of torque. A 1.5-litre diesel engine is quite fuel-efficient despite producing ample 245Nm of torque and 115hp of power. The price for the Kia Carens starts from just Rs 9.59 lakhs only and goes up to Rs 16.59 lakhs, enhancing its value for money quotient. Whereas, The prices for the Innova Crysta are on the upper side, starting around Rs 17.86 lakhs and going premium up to Rs 26.54 lakhs.

The success story of the Kia Carens in the 7-seater segment has shown India’s obsession with the value-for-money proposition. Moreover, despite the grandeur appeal and presence of Innova Crysta, the price-sensitive Indian market always demand justification. Kia has understood the formula and developed a perfect recipe with the 7-seater Carens, giving them a good taste of success in the Indian market.