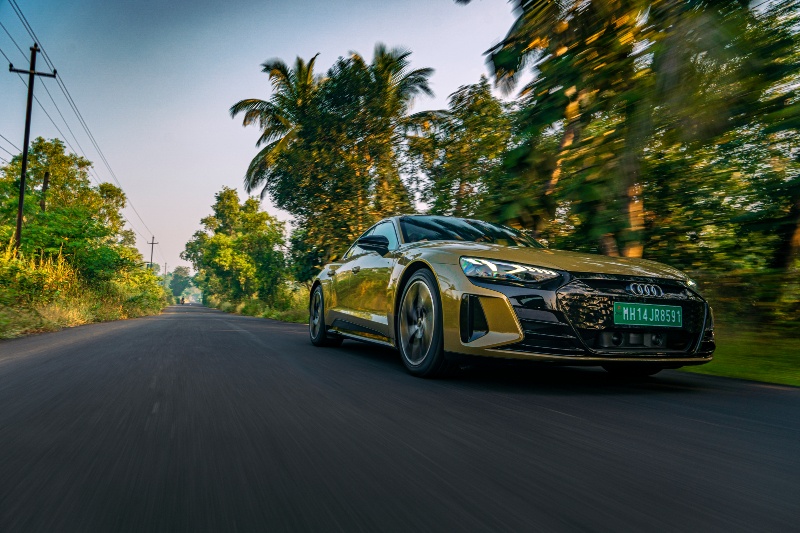 The Sound of a V10 will soon be hunkered down because we are looking at an all-electric future, but change is the only constant in life and if the shape of things to come is in the form of the Audi e-tron GT, then we should not be sniveling. The sister car with deep engineering ties to the Porsche Taycan – based on the same VW Group J1 platform; in fact, they were developed alongside each other and share a cutting-edge 800-volt propulsion architecture which makes faster charging and ensures performance stays consistent. The only difference is that the Audi e-tron GT is wrapped in a highly sharp suit and is a silent stunner.

It can sprint from standstill to 0-100kmph in 4.1 seconds without making any fuss and noise simply because its draws its power from 630 Nm of torque and 520 Hp. This power is converted to rousing acceleration with the help of its innovative two-speed transmission, which has a first gear for launches and a second top gear for optimal efficiency. More importantly, the cooling system means its 93.4 kWh battery pack can handle repeat runs without breaking a sweat of any heat-related degradation. The claimed range is 388 -500 km, but expect a real-world range of 300km, which is enough by any standards even if you decide to drive from Mumbai to Audi's Neckarsulm factory in Germany where the e-tron is produced alongside the R8. Of course, with charging breaks and assuming you have 30 days off from your CEO's desk. [

Even on 21-inch wheels, the ride is magically supple. Given that when you brush the brake pedal, the initial deceleration (up to 0.3G) is all regen – meaning a gentle driver could realistically punt around in the e-tron GT without ever actually pushing pad against the discs. This is a hugely impressive car in every department: comfortable enough to be a daily driver, but with bone-chilling acceleration; a practical four-door car, but with chiselled good looks and can handle corners with ease. It's a Quattro all-wheel drive, so the tail will not really wag out, but will grip the corners with so much confidence that you don't really need to lift your leg from the pedal. The Active Rear Spoiler controls the air resistance and down-force at the rear, which of course enhances the car's aerodynamics and performance. This retractable spoiler also comes as part of a standard accessory for both the Audi e-tron GT and the RS e-tron GT, which is very kind of Audi, actually. The spoiler will automatically move into position depending on the speed, and we could see the spoiler popping out above 80 km speed levels. Yes, its silent nature will make you honk more often than necessary just to  sometimes remind yourself of what you’re driving.

It's Curvy and looks delicious ..

The pronounced haunches over the front and the arches at the back just look fantastic, along with the huge concave bonnet which is massive, but cut to proportions and this thing looks pretty close to the Porsche Taycan, with which it shares the platform and underpinnings. Now, this being an EV, there is no front grill, but interestingly the trapezoid housing hosts the elevated nicely textured hexagonal gnarls, which accentuates the overall road presence of the car. I think this is by far the best looking Audi. The bottom lip of the bumper hides these sensors and radars and the front camera.

Just like any EV, the trunk or as you should say frunk, has a little compartment for added practicality, though much of the 81 litres of space will be taken by the charging unit. At the side, the active air intake cavities and gills all add up to the sportiness it has to offer (and mind it, they aren't fake ]. I think the arches and creases all across are one of the best on any Audi in years.

Now, speaking about the rear, there are some exciting items worth noticing like the pop-up spoiler and a light bar connecting the tail lights, which look splendorous, especially with the lighting pattern pleasing your eyes every time you see. The front headlamps house a very futuristic pattern with a lot of elements put together. It also looks beautiful when the turn indicators are on, as they glow in a unique pattern. The dance of the lights!

Inside the e-tron GT!

Coming to the interiors, you are treated with a rather conventional Audi'ísh looking design, but with a lot of drama going on in terms of different materials & textures thrown in. The massive slab of leatherette upholstery imparts a homely feeling along with the black piano inserts and fabric used in the seats, all well put together. The 12.3-inch digital instrument cluster is crisp and sharp to read, and a 10.1-inch touch infotainment system fills every bit of this car with the latest tech you can look for. A thick-flat bottom steering wheel with switches to control the infotainment and other driving aid features feels good in the hand and drives confidence within.

In the centre, something of my interest is the manual toggle switches to control the AC. Below is the Drive Select button to shift between different driving modes, which will tweak the power output and fiddle with the steering heft and set the active suspensions accordingly. Another little quirky element is the infotainment scroller which is touch-sensitive and reminds me of the iPod's volume controls. Right in the middle is a unique looking selector knob/switch that lets you change the gear by pushing it front and back. There is no traditional parking lever, but as soon as you stop the car and open the door, it automatically puts the vehicle in parking mode. Smart Move

The panoramic moonroof is standard across the range which makes the cabin feel much roomier. The backseat, though, is not the centre of attraction here with the seating being a little congested, and if you're a tall person, the headliner brushing your hair for sure mess up that expensive haircut of yours. On the contrary, the knee room is pretty decent because the front seat shapes have scooped out a little more space for you to stretch your legs. I wish the backseat were reclined a bit more for added comfort when you are shelling out so much money; you do set your expectations a little higher. And what about the centre seat for a third passenger, you'd ask? Well, let's just leave it there! The rear windows are a tad bit too small too. With Charging Ports on both sides, the e-tron GT makes things more convenient for the driver. Surprisingly it does not have a wireless charger though it's an EV, and there is one mini USB port tucked under the armrest, and you will have to literally break your arm to reach that. Maybe Audi thinks that once you take the e-tron out , you have surely charged up both your car and your devices.

Let’s pull over and conclude.

Audi e-tron GT is a handsome car that drives fast silently and looks pretty when parked or while being charged.

Let’s stop growling about our future , growling V10 was yesterday, while the silent 1000 NM of torque is tomorrow and the e-tron GT is a step in that direction. It’s a car with raised suspension of 40mm that can tackle most of the speed breakers and can actually take you on mountain tops for the scenic spot. Just ensure that its around 300 km mark journey or pass by a charging station. You are good.

For: Design, drive, acceleration and the retractable rear spoiler

Against : No Wireless Charging slot