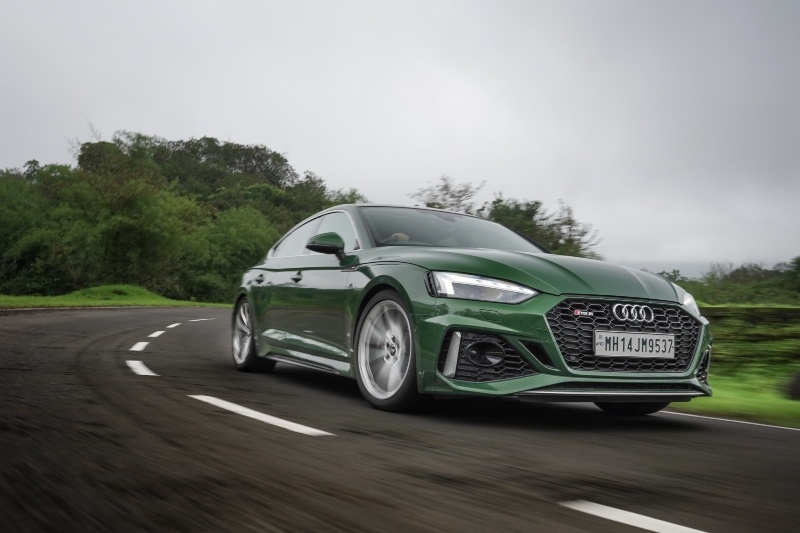 I crouched and groaned as I crammed myself inside the new Audi RS 5 and immediately heaved a sigh of relief once I was in. After what felt like an eternity of driving giant high-seated SUVs, and nerdy hushed EVs, I had finally found myself in a fast, petrol-powered low-slung sedan. The RS 5 has changed quite a bit from what it was, and if the spec sheet was anything to go by, it hadn’t lost anything in translation. Sure, it doesn’t get a V8 anymore, and it misses out on the exclusivity of a 2-door coupe as well, but none of it matters, as I was about to find out.

Audi says it wants the RS 5 to be the one-for-all car. It wants the customer to drive it through the mundane week and as the weekend comes by, blast out for a nice drive in the same car. Hence, there has been a bit of practicality added this time around. The RS 5 is now a Sportback with four doors, and before you think it looks like a plain-jane Audi, stop reading this and glare at the images. Nothing about the RS 5 is subtle or boring. The sharp lines and creases, strong power lines on the bonnet, massive RS grille that looks like it can gobble up a hatchback, striking MATRIX LED headlamps and silver ducts on the aggressive-looking bumpers are all typical of a super-sedan. Over to the side, the standard 19-inch wheels won’t wow you, but you do get an option for different and bigger wheels. What will wow you, though, is the sloping roofline, which gives it that characteristic sportback look that Audi has aced better than anyone. At first glance, it actually looks like a coupe. Move to the rear and the big oval exhausts jump at you along with the sleek-looking LED taillamps. There is nothing shouty about the rear-end like an RS 7, maybe, but it still is pretty distinctive.

The interior is like a typical high-end Audi, and although the design leans more towards the A4 than A6, which isn't all too bad given the type of car the RS 5 is. Yes, you will miss out on the dual touchscreens, but they are only a distraction for anyone interested in driving. The 12.3-inch touchscreen is slick and responsive, and once you pair the Apple CarPlay, it doesn't matter how good or bad the interface is. The overall quality is unsurprisingly good, but some bits will surprise you. For instance, the seats on the RS 5 are sport seats for good measure, as they have incredible support and bolstering but also get massaging functions, which work really well after a long day of hard driving. You also have three-zone climate control, panoramic sunroof, a Bang and Olufson audio system with ten speakers, and the cabin wrapped in a blend of leather and Alcantara.

Still, all this is secondary to what lies under the bonnet and once you get going. The RS 5 now gets a smaller 2.9-litre, twin-turbo V6 engine, but don’t frown upon the ‘smaller’ bit for a moment. It is just as potent with 450bhp and 600Nm, and thanks to Audi’s fabled ‘quattro’, 0-100kph take a short 3.9 secs. More than the figures, though, the experience from behind the wheel makes all the difference. The surge in acceleration is rapid, and it takes no time to slingshot you ahead. The twin-turbo setup works like a charm with virtually zero lag, and the engine is always eager no matter the drive mode. That said, you can customize the drive modes and preset the RS1 and RS2 modes to your liking. On a gloomy day in crawling traffic, you can have the RS1 set at the comfiest and, for the weekend, keep the RS2 at its wildest. It is extremely effortless to drive it and drive it fast.

What is a bit of a downer, though, is the exhaust. Sure it is raspy, and on occasion, it crackles and pops as well, but it just isn’t loud enough to excite you. Owners are sure to flock to aftermarket sites for a louder setup. What is very impressive, though, is the way the RS 5 feels in corners. It might be the fact that I was in a sedan after ages, but it all felt so much better. The body control, weight distribution and that fantastic RS Sports suspension all work very well. Those who say Audi’s are boring to drive really need to try this one out. It doesn’t have the bulk of the RS 7 and is a lot lighter, so it is well adept in the corners. Again, the quattro takes care of any slippage, and there is always tonnes of grip on offer no matter the surface. However, when you do want to stop, the RS steel brakes are as strong as your mother pulling you from running out of the house. There isn’t any brake fade, and the pedal feel is superbly reassuring.

The gearbox, too, is swift, and shifts are smooth. Use the paddle shifters by putting the gearbox in manual, and you are set for an engaging drive. It is so much fun that I almost forgot about the practicality bit and that it has two more doors at the rear. The back seat is obviously more useable than on a coupe; however, if you measure over six feet, it feels a bit cooped up here. The roofline will graze your head, and knee room is sufficient at best—no room to stretch here.  The ground clearance was the other surprise as even with four passengers, it took on speedbumps very well. Not once did I have to do any supercar antics like take it sideways over a bump. Just slow down, and it will tip-toe over most bumps in your area. Broken roads, too, aren’t an issue as the suspension has a good balance and thanks to a good amount of tyre profile on the 19-inch wheels, there is enough cushioning.

That said, you will be yearning for that driver’s seat no matter what day it is. Even boring drives to work and back are fun in the RS 5, which is the whole point. The rear seats and the huge boot are good for your kids and friends under six feet, but for you, the one who owns it and drives himself, the driver's seat is the one to be in. Priced at Rs 1.04 crore, the RS 5 isn’t exactly a bargain. There are performance SUVs in the same price range, and you also have some rear-wheel-drive sedans that can be more fun when you go sideways.

But, as a pure driving machine, the RS 5 is hugely impressive. It won't go sideways unless you are Walter Röhrl, but it will make you grin and snarl each time you squeeze the pedal. It makes you feel like you are connected with the car, and if I am totally honest, none of the performance SUVs out there give you that feeling.