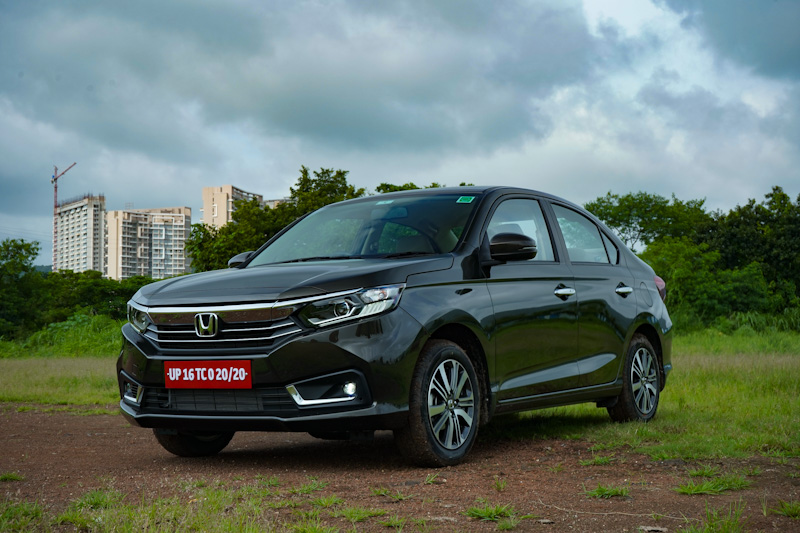 Finding the changes that Honda has made for the 2021 Amaze is like having to play a game of where’s Waldo. But it would be wrong on my part to make you keep guessing so instead let me just help you cheat the game by telling you all that is new. I can assure you there are quite a few subtle changes Honda has made for the 2021 Amaze Facelift let me walk you through the changes.

The first change that you are bound to notice is at the front of the car, where you see the LED projector headlights with integrated DRLs. Then, moving along, it has a redesigned front grille. Instead of a slab of chrome, it is now three horizontal slats with chrome accents running across the width of the grille. Furthermore, it also has LED fog lights that complete the front package and make it seem like a vehicle from a segment above its own.

Next, move over to the side, and the thing that you would notice (quite prominently) is the 15-inch diamond-cut two-tone alloy wheels and chrome door handles. Finally, things that have changed along the rear include the taillights that now have a C-Shaped LED rear combination lamps and redesigned rear bumper with a chrome garnish on the lower bit of the bumper and reflectors.

Also while you would notice these changes on the outside of the 2021 Honda Amaze, step inside, and you would perceive that nothing is different from its current generation apart from the silver finish on the dashboard and steering wheel. To be honest, the interior wasn’t a bad place to be in, but what I feel is that the 6.9-inch touchscreen infotainment audio system used by Honda feels extremely cheap and seems like an aftermarket product, which Honda could have improved for 2021. Nonetheless, it still offers plenty of functionality such as Apple CarPlay, Android Auto, weblink and a host of advanced functionality like voice command, messages, audio streaming support and wireless infrared remote.

That isn’t the only change made for the 2021 Honda Amaze though, while the engines on offer are the same 1.5-litre DTEC and 1.2-litre IVTEC powertrains as before. The diesel engine produces 98bhp and 200Nm, which is 20Nm more than the previous generation and is mated to a five-speed manual. With the seven-speed CVT, it makes 79bhp and 160Nm of torque. In its petrol guise, the Amaze offers 88bhp and 110Nm, which can be had with both, a five-speed manual or a seven-speed CVT gearbox.

To drive, the Amaze feels highly planted, and the power delivery feels linear and smooth. The jerky shifts of the CVT with their famous rubber band effect aren’t felt on the vehicle. Even under hard acceleration, the automatic gearbox shifts between gears smoothly. Additionally, paddle shifts are also offered, but those purely seem like gimmicks on a car of this nature. Like in the previous generation, the interior space on offer is ample. Thanks to the supple suspension setup on the vehicle, the ride quality of the Amaze feels plush and extremely comfortable.

If you ask me, the Amaze was already quite a capable car, to begin with. With its new price tag that ranges between Rs 6.32 lakh to Rs 11.5 lakh, it certainly heats up the competition that it faces from the likes of the Hyundai Aura and the Maruti Suzuki Swift Dzire. But between the two, only the Amaze offers a CVT gearbox compared to the AMT automatic gearbox provided by the others. Furthermore, compared to both the Aura and Dzire, the price tag of Rs 6.32 lakh for the base variant makes it the cheapest car in the trio. Hence, it will attract customers looking to opt for an inexpensive sedan instead of wanting to buy a hatchback. With all the upgrades that Honda has added to the Amaze, it certainly makes a compelling package for you as a buyer compared to the Aura and Dzire. FYI, you always would have the bragging rights of owning a Honda which is known for its everlasting reliability.