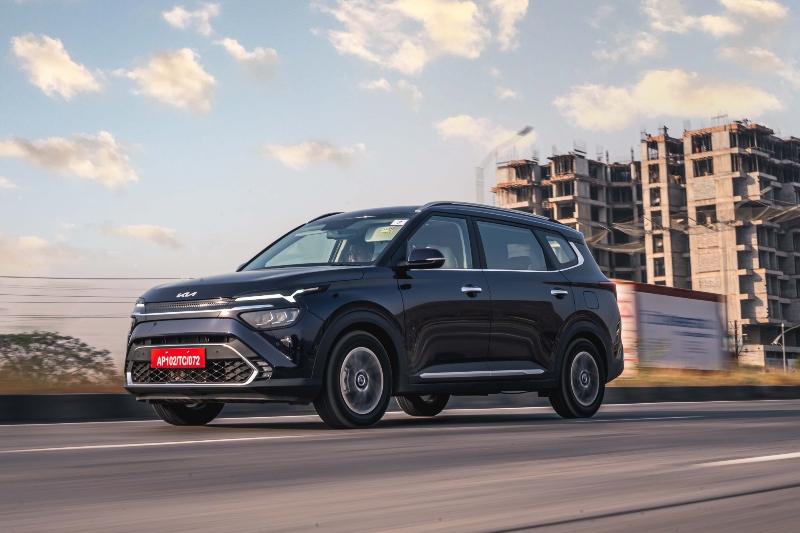 When KIA motors were first launched in India in 2017, most people were sceptical of the South Korean automaker. Although its mother company, Hyundai, has always been a part of the Indian market, there still was some hesitation around KIA motors at first. But since they launched their first product, the Seltos. As a result, the brand has achieved some incredible sales numbers. If you don’t believe the numbers, just look at the number of Seltos and Sonets plying out on the streets. With their latest launch, KIA Motors aims to recreate the same magic that the Seltos created with the all-new KIA Carens. In our review, we will try to accentuate our statement above by putting the Carens to its paces!

KIA neither terms the Carens as an SUV nor an MPV but state that it is instead a combination of the best of both worlds. But in reality, if you ask me, the Carens does have quite the distinctive looks that MPVs usually have. That being said, the Carens is a pretty handsome looking vehicle. At the front, the design elements are extremely clean and sharp. However, what catches your eyes are the 3D design piano black trim pieces and the garnish of chrome all around the exterior of the Carens.

I must also point your attention to the headlight cluster with these gorgeous looking DRLs, which KIA claims are from the constellation of the stars. Right below is where you have the sharp-looking headlights with a funky looking fog light housing. Moving along to the side and you notice these strong shoulder lines. Furthermore, these butch looking wheel arches contain the 16-inch alloy wheels. I would like to point out that the Carens has the longest wheelbase of 2780mm in its class. In comparison, this is 20mm longer than the Hyundai Alcazar too.

Another thing most Indians would appreciate is the amount of ground clearance you have on offer, which can rival quite a few SUVs as well. Moving on to the rear and things are pretty simple here as well. You have a decent garnish of chrome towards the bottom. What stands out here is the LED taillights with this light bar running across the width of the tailgate.

Interiors of the KIA Carens

Let us now move on to the interiors, something KIA didn’t showcase when they unveiled the Carens in December. Step inside this vehicle, and you are instantly welcomed by the high-quality materials used inside the Carnes. Everything you see and feel feels plush and premium and posh. There is ample use of soft-touch leather and high-quality plastic on the inside, making it feel quite upmarket. Like the outside, the interior trim pieces are finished in a gloss black finish with a chrome garnish near the AC knobs, centre console and steering wheel. One niggle that I personally have with gloss black interior pieces is that they tend to scratch easily and hold in a lot of fingerprints. Moreover, there is one really unique design element that does require a special mention, that is the fact that KIA has offered this light blue coloured plastic on the dashboard and even the steering wheel, which make the Carens look a lot more premium compared to the black plastics we are generally used to seeing.

Before moving to the back seat, let me press this button to electronically fold the second row of seats and climb into the last row. But actually, sitting in the third row does feel slightly uncomfortable. For tall passengers, their legs won’t have a lot of thigh support. Instead, they will enjoy the backrest, which reclines would appreciate the ample amount of headroom they have on offer. Quite honestly, over long journeys, the third row can be used by kids more than it can be used by adults.

Now that the third row’s covered let us move onto the second row of seats. Our test vehicle came fitted with captain’s chairs instead of a bench. I am happy to report that these seats are incredibly comfortable; as a passenger, you have a lot of space, and more room can be created by moving the seats forward or backwards. However, there is one drawback of the air purifier robbing the rear passenger of just a little legroom. Since it is placed behind the driver’s seat, you are likely to hit your knee while climbing in and out if you have the third row occupied as well. Over long distances, you might find it challenging to stretch your legs comfortably and experience the Carens. I must mention that the rear passengers wouldn’t feel claustrophobic thanks to the large windows. Also, if required, the rear passengers can block out the sun by using the in-built sunshade.

Talking about the boot space, now this has plagued quite a few of the 7-seater cars. For instance, the KIA Carens offer a boot space of 216 litres with all its seats up, which is adequate enough, but if you require more space, one would have to fold down the rear seats to make more room. One more thing worth mentioning is that you get a lot of storage spaces such as multiple cup holders, storage space and even a try to keep your loose change. The interiors feel practical for the kind of use expected from it.

Like every other KIA sold in India, the Carens is also loaded to the gills with features and technology. Step inside, and you are greeted by a 10.25-inch touchscreen infotainment system that offers Apple CarPlay and Android Auto. It also gets a new touch-based panel with switches for operating the automatic climate controls. It further is equipped with Kia’s UVO connect, along with 64-colour ambient lighting, ventilated front seats, a digital driver’s display, seat-back tables with cup holders, and an air purifier.

On the safety front, the Carens gets six airbags, ABS, ESC, hill-start assist, disc brakes at all four wheels, TPMS, and rear parking sensors as standard across all variants. One distinctive feature that the Carens offers is an electrically operated one-touch tumble down feature for the second row.

Driving Dynamics of the KIA Carens

Now, this is the most essential bit of the review. How does the KIA Carens drive! KIA was generous enough to let me experience both the 1.4-litre 4-cylinder turbocharged petrol motor and the 1.5-litre 4-cylinder turbocharged diesel. These are the same powertrains that you also find in the KIA Seltos. In its petrol guise, it produces 140bhp and 240Nm and is mated to a 7-speed DCT gearbox. To talk about the performance, if you have been driving a Seltos this is pretty much the same. So if you ask me, it has an adequate amount of power, but you can’t expect to perform in a way that would excite you because this is a family haulier. But that being said, it does do most of the things you would expect it to do pretty well. Flooring the throttle does make the engine respond and pick up some pace, but that doesn’t happen swiftly. Owing to the DCT gearbox, the shifts are smooth and refined without the jerks you usually have with regular gearboxes. But in all honestly, I would have liked if the petrol engine offered a bit more juice because 140bhp does feel enough but sometimes make you feel caught out. Nevertheless, cruising at highway speeds is pretty easy, and when you are roaming around within the city, it posts a good fuel economy number as well.

Moving towards the 1.5-litre diesel, I drove as well. This makes the exact power figures such as the Seltos, 115bh and 250Nm, to be precise, which is mated to a 6-speed manual gearbox but is also available with a 6-speed torque converter automatic. Like the petrol, the diesel, too, feels exceptionally refined, and due to the extra torque, it does have a little more punch. If you like driving on the highways more, the diesel trim is the right way to go. The NVH levels of the Carens does decline slightly due to the diesel noise coming inside the cabin, but that is barely noticeable. The ride and handling is pretty similar to the petrol-powered car, and also, the changing the gear feels hugely slick, and the clutch doesn’t feel too heavy.

After spending an entire day with the Carens, I must admit that this certainly has all the right ingredients to recreate the same magic that was created with the Seltos in India. Also, I had quite a hard time comparing the Carens to its rivals, the Maruti Suzuki XL6 and the Hyundai Alcazar. Because honestly, the XL6 feels extremely aged in terms of the tech on offer, and I consider that the interiors of the Alcazar are a little too cramped, especially for the third-row passengers. Well, KIA India hasn’t officially unveiled the prices of the Carens just yet, so we still need to see how it sets itself compared to its competitors. But if you ask me, the Carens does feel like a well-rounded package that will attract buyers looking to buy a 7-seater family haulier.