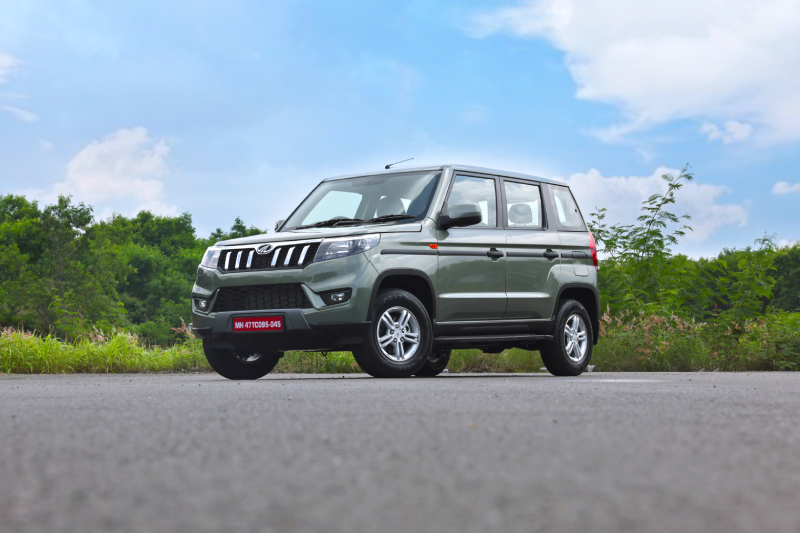 Don’t worry, we haven’t uploaded the wrong review, that isn’t the TUV300. In fact, it's the new Bolero Neo. As the name suggests, it’s sort of like a younger sibling to Mahindra’s time-tested model. Before anyone asks, the Bolero Neo will be sold alongside the Bolero. But, the Neo is meant for a very different kind of crowd. One that may not relate with the ubiquitous Bolero, but wants an SUV with a little more panache. So, does this new SUV from Mahindra really deserve that Bolero name? Also, what was the point of doing that at all? We recently travelled all the way to the Mahindra’s test track in Chakan, to try and get an answer to those questions.

Does it look any different? In short, yes. Mahindra has done quite a number on the Bolero Nero. Upfront, there’s the signature Bolero grille and X-shaped bumper, which are clear attempts to put the Bolero in the Neo. Other than that, there’s the new headlamp, front fog lamps, rear spoiler, and the X-shaped spare wheel cover from the Bolero. Further adding to that are the new five-spoke alloy wheel design and cladding all around the front, sides and rear. We must say, it all comes together rather well.

he Bolero Neo looks a lot more appealing than the TUV300, there’s no question about that. Also, if you haven’t been able to guess, that cladding just below the door handles that stretches across the Bolero Neo length are also a design cue to the legendary Bolero. Again, well done, Mahindra. There’s certainly an effect the namesake will have with buyers but if the product can look the part too, it helps the cause, doesn’t it? Is it different from the inside, too?

No, not really. The Bolero Neo, like the TUV300, continues to be a seven-seater SUV. That’s right, this is still a sub-four-metre SUV that can seat that many. It gets a seven-inch touchscreen infotainment system which is rather easy to use, along with a three-inch multi-function display and a redesigned instrument cluster. Other prominent features include cruise control, Eco driving mode, an AC Eco mode, steering-mounted control, tilt-adjustable steering wheel, beige upholstery and an armrest for the second-row seat. However, we must mention that the build quality is not really great on the Bolero Neo. The doors take quite a bit of effort to close and there are no rear AC vents, which is quite a glaring miss on a seven-seater SUV. Although, that beige interior does add a sense of space to the cabin.

Any other changes? Mahindra has made a few other significant changes to the Bolero Neo both design-wise and mechanically. For example, the hood has been lowered for a more squarish stance while the overall ride has been lowered by 20mm. Also noteworthy is the fact that Mahindra has reinforced the door panel for better safety. The Bolero Neo uses a third-generation chassis from the Scorpio and is a rear-wheel-drive vehicle. But, that’s as far as its ‘sporty’ credentials go.

However, the most significant addition is that of a mechanical differential on the top-end N10 (O) variant. We got to test this differential on a fairly simple off-road course at Mahindra’s factory. Basically, it’s useful to get the Bolero Neo out of a slightly tricky situation that requires the wheels to lock if extra traction is needed on a path less travelled. Especially where loose surfaces are involved. In short, it’s a neat addition to appeal to those who want more off-road capability.

What’s it like to drive? As mentioned before, we only drove the Bolero Neo at Mahindra’s test track so it’s hard to say how it will behave in real-world conditions. But, first impressions are as they should be, I mean this is a Bolero we’re talking about, in all honesty. The driving position is a commanding one, and that mHawk100 diesel motor gets improved torque over the TUV300. The 1.5-litre, three-cylinder engine produces 99 bhp and 260 Nm of torque. The power delivery is linear with a burst of power around the 2,000 rpm mark.

The steering feels fairly well-weighted and thanks to the lower centre of gravity, the Bolero Neo feels a little more sure-footed in the corners compared to its predecessor. However, do note that it is meant more for mile-munching rather than spirited driving. Overall, it’s the typical body-on-frame SUV experience but we must say, the ride quality is rather pleasant. Furthermore, Mahindra has carried over the engine start-stop, and driving modes (Eco & ESS) from the TUV300, which add the overall practicality, since these features do help deliver slightly better fuel efficiency. At today’s fuel prices, we’ll take all we can get! What do we think? Well, let’s put it all into perspective, shall we? Mahindra has priced the Bolero Neo from Rs 8.48 lakh to Rs 9.99 lakh (ex-showroom). It comes in three variants - N4, N8 and N10, with the latter coming with an optional (O) variant for the mechanical differential spoken about earlier. It comes in five colours and doesn’t really have any direct rivals. But, if pricing is taken into consideration, it does lock horns with other sub-four-metre SUVs like the Maruti Suzuki Brezza, Kia Sonet and Hyundai Venue. Since we had just a couple of hours with this Mahindra, it’s hard to give a concrete verdict, in all honesty.

But, we will say that this new addition to the Bolero household certainly makes sense, especially for those from a younger generation that wants a reliable, robust and spacious sub-four-metre SUV. Sure, it has its shortcomings, but, by giving the TUV300 a bold new appearance, a few modern touches and a name that resonates with the masses, Mahindra has certainly taken a more practical approach with the Bolero Neo. Who wouldn’t want to have the name of the highest-selling SUV of all time in India?