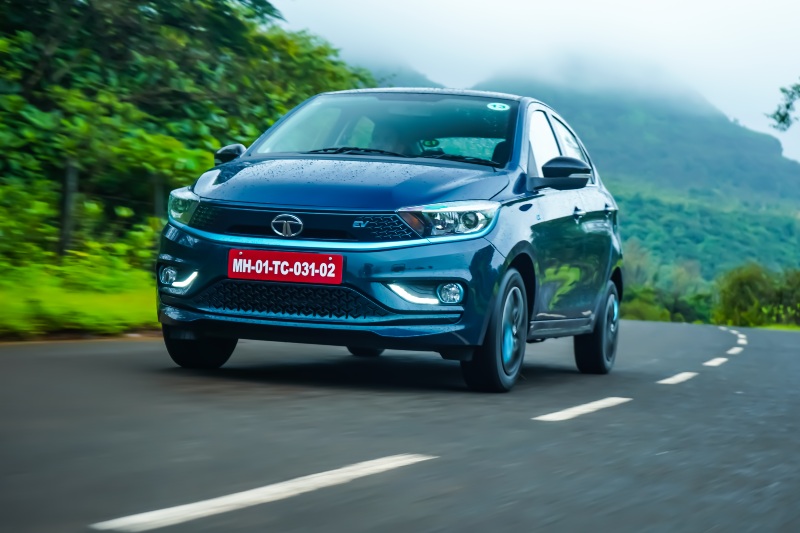 Talk about electric vehicles, and the first question that springs to mind is ‘how far can you actually take it?’ Trust me, the lesser things we commit to, the better, and larger sections of automobile consumers aren’t ready for a commitment of charging their vehicles. It all seems like a worrying task piling up on an already hectic schedule.

Gladly though, Tata has eased these commitment levels by revamping their Tigor EV with a new electric powertrain. Although never made available to the general consumer, this electric compact sedan has been around as a fleet-only offering but this time around, with the introduction of Tata’s 300 Volt Ziptronic powertrain, it has gained power, torque and usable range. What also majorly adds to its increased performance is a bigger battery pack that’s rated at 26kWh.

So how much gain in performance are we talking? 34hp increase in power and a 65Nm bump in torque. The liveliness is almost immediately felt from the word go, however the tuning prevents all that electric torque to be fed to the wheels immediately. Instead, the increment in speed is gradual and linear. Yet, this is a fairly quick car for city speeds, which means zipping through traffic and hunting those small gaps will surely be fun on an otherwise mundane drive to work.

Alright, so the Tigor EV is powerful and more usable. Are we sure about its range? To find out, I decided to challenge India’s least expensive EV to a popular hill station outside Mumbai – Lonavala. Gruesome testing for a first-drive review; the climb up the ghats would mean higher battery consumption.

Tata Motors claims that extensive work has been done to better the battery management system and algorithm that interacts between the car and the driver. Constant monitoring of the readouts did confirm this. Unlike the Nexon EV that I drove a year ago (which has now received multiple software updates) the Tigor EV had a consistent drop in the indicative range that was hugely based on the AEC (average electricity consumption) readout, just like how DTE (distance to empty) is dependent on the AFE (average fuel economy) in a conventionally powered vehicle. These calculations are dependent on external factors and driver inputs too, yet the Tigor EV seemed to be process these factors to deliver a respectable battery and motor performance.

Believe me, if you’re testing an EV, you almost always want to experience the charging experience. It also helped me verify Tata’s fast charging capabilities on the Tigor EV. This wasn’t entirely necessary but it did help calm my range anxiety a fair bit. After the top up, I enjoyed the journey a lot more than worrying about every passing kilometre. A quick 15-minute charge allowed the battery to gain close to 15 percent of its capacity. In terms of money spent, close to 5 units of electricity were used, totalling 100 rupees for a gain of around 70 kilometres. The other advantage of the slightly smaller battery pack as compared to the Nexon EV means faster charge times for the electric Tigor. Also, the batteries charge quicker till 80 percent with more amps flowing through it, and this gradually drops off as the charge reaches the brim. It might seem like rocket science, but the longer you live with it, the more you know.

The ascent up Tiger Point (and beyond) was victorious, and this mass-market EV did manage to get us far out from the city. These are the sort of things ideal families would like to indulge on a weekend, and the Tigor EV has proved its point loud and clear. As I slurped down some hot Maggie in Lonavala’s chilly weather, I could only think of how these EVs are taking over mobility. It’s happening friends; the revolution is just around the corner.

Did we make it back to the starting point? Yes we did, and the descent helped gain a few more kilometres on the estimated range. With more than what was required, I let go of my range anxiety completely and switched to Sport, as if someone commissioned me to empty the batteries before dropping the car off. Despite 60 kilometres of abuse, the Tigor EV pulled into the hotel with close to 35 percent battery left. If your brain can’t process it already, these are phenomenal numbers from a EV that’s also the least expensive one out there currently. Pun intended.

But can the larger audience evolve to electric? It’s asking price might be slightly more than what we expected but here’s the thing – you need not worry about a slaving transmission like the AMT or a gruffy three-pot motor. It’s smooth, it’s quiet, it’s refined. With a 4-star GNCAP rating, it’s also reassuringly safe. Moreover, it’s relatively quick and it’s extremely, extremely efficient to drive. So, in all, there’s a lot to gain from the Tigor EV, including the sense of gratification of doing something good towards the environment. For city dwellers looking for a run about, it could very well be the time to push to electric.

Tata Tigor EV teased ahead of its debut