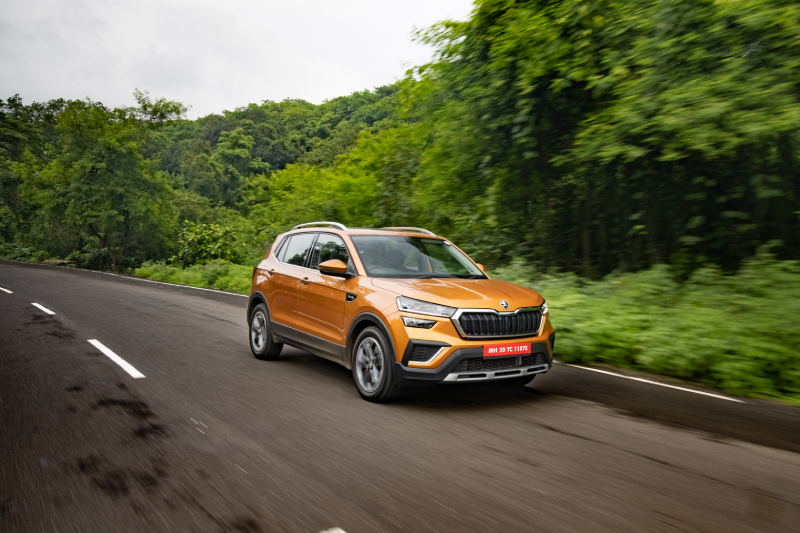 Skoda’s brand new Kushaq has just arrived on the scene and things look quite interesting, to say the least. Needless to say, there’s a lot resting on the shoulders of the Kushaq as far as Skoda’s future in India is concerned. So, is it worth it? Can it take the fight to the competition, which includes the Hyundai Creta, Kia Seltos, MG Hector, Renault Duster and Nissan Kicks? That’s a tall order given the sheer popularity of some of those models on that list. But, there’s a lot going for the Kushaq and also some things that are not. So to make things easier, we’re going to list down a few things we liked about this new compact SUV and some things that we didn’t. If you prefer watching a video rather than reading, follow the link to watch our first-drive review. Let’s start with the good stuff first -

The first thing anyone will notice from behind the wheel is the sheer power on tap the Kushaq has right from the get-go. That 1.5-litre, four-cylinder TSI motor loves to revved hard and delivers on the promise of performance. In case you’re curious it puts out 148 bhp and 250 Nm of peak torque and comes mated to a six-speed manual or a seven-speed DSG. Oh yes! The DSG lives on. The Kushaq has a meaty bit of push from torque right around the 2,000 rpm mark and there are no vibrations to report of here. Those power figures, by the way, are more than Kia Seltos and Hyundai Creta. So, one point to the Czech then.

Another ace up the Kushaq’s sleeve is the superior handling it has compared to some of its rivals. Given its smaller dimensions, which we’ll get to later, the Kushaq turns in a lot quicker and feels much more confident around a bend. Thanks to that extra power, it's a fun machine to potter around towns or even the highway. The steering feels precise and that underlying German (I mean, Czech) strength adds that extra bit of confidence. The seating position feels snug and commanding while the gearshifts feel smooth and precise. This is one compact SUV you’ll definitely like driving!

As is the case with most Skoda vehicles from the past, safety is given prominence which is always a nice touch. And we’re happy to report again that it's the same case with the Kushaq. As standard, it comes with two airbags, front and rear parking sensors, ISOFIX mounts and Electronic Stability Control - which is great! The more expensive variants get six airbags, TPMS and hill hold control. That's a pretty good amount of kit and what helps is the fact that this India-specific MQB A0 IN feels robust and modern. Things are going well, aren’t they?

Things get even better once you check out the small clever bits on the inside. There’s an extra bit of grip in the cup holders so that one can simply open their water bottle more easily with one hand. Then there’s the special place for families to place their religious idols, those rubber bands in the side door pockets and thoughtful phone holders for the second-row seat passengers. Since we’re on the topic of thoughtfulness, how about the cylinder deactivation system. It automatically shuts off two cylinders when you’re at lower speeds to make for a more frugal drive. There's also a neat 'Valet mode' to make sure anyone who drives your Kushaq apart you, stays in check. Good stuff!

Another big plus is the ride quality, which feels quite supple, even at high speeds. That 188mm of ground clearance comes into play on bad roads and its Kushaq feels fairly confident over rough patches. Once again, that platform that sounds like something Elon Musk would name his children shines through. It feels very well sorted and versatile, too. Especially if you're looking to get to your destination in a hurry!

Also, a big plus on the Kushaq’s side is the ample room at the back. That extra wheelbase does come in handy in this regard. I'm about 5'9 - 5'10 and there was more than ample legroom as well as headroom at the back. However, the only downside here is the fact that the seats are slightly upright and are not as wide as one would expect from a car of this class. Nonetheless, it does a decent job.

I’ll admit that this is a bit of a subjective space but bear with me here. The Kushaq from some angles looks quite boxy and unattractive from some angles, especially if you look squarely from the rear. Sure, the funky looking interior design elements and sharp styling bits on the outside add a bit of panache. But the bigger problem here is the lack of presence. Consider this, this car has to stand up against cars whose whole purpose is to look bigger than it is to satisfy that big car feel for most buyers. The Kushaq, in that sense, can leave one wanting for a little more. The interiors can feel slightly dull and personally, I’m not a huge fan of the two-spoke steering wheel. Do you agree? Or do you feel the Kushaq feels vibrant enough?

There’s no easy way to say this but the Kushaq is by far the smallest car in its segment. Except for, of course, the aforementioned wheelbase, which is more than all its rivals except for the MG Hector. Whether it's the length, width, height or boot space, the Kushaq is a much more compact car than its rivals, by quite a fair margin. Take for instance the Creta and Seltos, which are 4,300mm and 4,315mm long respectively, while the Kushaq is 4,221mm. Similarly, both segment leaders are 1,790mm and 1,800mm wide, while the Kushaq is just 1,760mm. It’s the same story with the height, with the Kushaq being slightly shorter than both. Boot space-wise, the Kushaq measures in at 385 litres, compared to the 433 litres on the Creta and Seltos. This can be quite a big turn off for some. Since as most of you know, in India, size matters - big time!

Then there’s the problem of some missing features on the Kushaq. For example, there’s no panoramic sunroof, which would have added a lot more room to the cabin, as we spoke about before. It doesn’t have an electronically adjustable driver seat and comes with a fairly plain-jane analogue instrument cluster with just a simple MID in the centre. Given some of the other unique additions like the touch-sensitive AC controls or the large 10-inch touchscreen system, this does feel like a letdown.

As most may already know, Skoda does not sell diesel cars in India anymore, and the Kushaq, of course, is no different. It does get a 1.0-litre, three-cylinder TSI engine for those wanting a more practical package but that can’t in serious terms be expected to match the fuel efficiency and punch of a diesel motor. This, too, can be a sore point for those looking to do some serious mile-munching every day. But, I have to say, that TSI engine is pretty fantastic anyway, from a driver’s perspective, of course.

We hope that was helpful but there’s still one thing remaining and that is the verdict. To put it simply, the Kushaq has its strong points which are hard to ignore. But, there’s a lot Skoda’s compact SUV misses out on too, which can be even harder to ignore given the competition. It must be said though, Skoda has done an excellent job at setting the Kushaq apart from its competition. But, all that could change once the pricing is announced, which will be on June 28th. Simply put, we feel the Kushaq needs to undercut its rival at least by some margin to make for a fair fight. From what we’ve gathered today, the Kushaq is a fun, handsome driver-centric compact SUV that has a bit of a size problem. Question is, knowing all that you know now, would you consider it over its rivals?